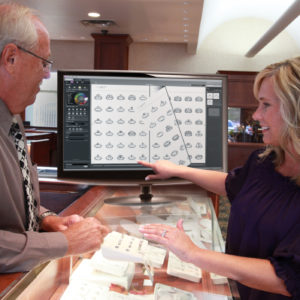 Matt Stuller and Jeff High first started talking seriously about the idea that would become CounterSketch Studio in 2008. The two leaders – Stuller is the founder, chairman, and CEO of Stuller Inc. in Lafayette, Louisiana, and High is the founder and president of Gemvision Corp. in Davenport, Iowa – recognized that the industry faced challenges on many fronts.

In addition to an economic downturn that would soon become the Great Recession, consumer tastes were changing, and old models of business weren’t working.

“We knew the paradigm needed to change,” Stuller says. “Jeff and I were very concerned, because the industry was hurting.” 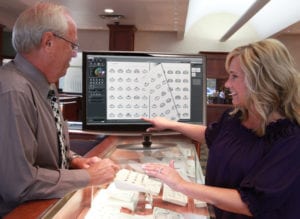 First, they saw that the industry needed to become more nimble in its handling of inventory. The years of producing massive amounts of jewelry and hoping it would sell were coming to an end. Banks were becoming more unwilling to finance the gamble, thus designers and manufacturers could no longer underwrite the costs of disgorging collection after collection each year, only to have jewelry often sit unsold in their warehouses or-worse-in jewelers’ showcases, tying up their cash flow. For Stuller and High, it seemed that retailers needed a way to show consumers an ever-changing variety of jewelry styles in virtual or prototype form, and order only the jewelry that customers really wanted.

Second, they saw that shoppers were changing. When people took the time to visit a store, they yearned to be entertained. And they didn’t want to see the kinds of products they could easily find in a random Internet search. Many consumers—especially the Gen Y bridal generation—wanted “something different” and, preferably, an interactive experience where they could play a role in customizing their purchases. Jewelry makers and designers who specialized in custom design were already capitalizing on that burgeoning demand. Now, the larger industry needed to adapt to the new reality.

Stuller and High had an ongoing dialogue about how the industry could achieve “mass customization,” to address both the inventory dilemma as well as the customer’s desire for an entertaining, personalized jewelry-buying experience. “We were aware,” says High, “that it would involve an entire rethinking of the interface between jewelry design and manufacturing.” The assignment was daunting, and would mean the development of new tools, programs, methods, and technology. But in December 2008, in the depths of recession, Stuller and Gemvision entered into a strategic partnership, and the race was on.

To make the CounterSketch system a reality, the Gemvision team embarked on what seemed like an impossible assignment. Could they develop a simple way for customers to play a role in the complex process of creating a piece of jewelry on a computer-and see instant results on screen? Both companies quickly realized that the key was to create what they called a Starting Point Inventory of models, then figure out a set of parameters for alterations that a customer could make-with the help of an experienced jewelry salesperson who understood the rudimentary basics of design.

While Gemvision was tackling the design software, Stuller was hard at work figuring out how it would make customers’ orders in the eight-days-or-less turnaround it wanted to promise.  “We had to turn our systems completely around, so they were driven by consumer demand,” Stuller says. “In the past, we had master molds, and we would reproduce fewer pieces many times.” But CounterSketch, he says, forces his operation to respond to myriad style possibilities, “because you’re selling consumers what they want, rather than what you have.”

In the autumn of 2009, the beta version of CounterSketch Studio arrived in jewelers’ stores for a first test; the formal introduction of version 1.0 came in February 2010, and version 2.0 was released in October 2010. The creators describe it as “a complete CAD/CAM design operation that fits on your counter.” It includes design software with a wide selection of pre-loaded “Starting Point Inventory” models that jewelers and their customers could customize with 3-D alterations, using a set of slider controls. (Its Version 2.0 inventory features almost 2,000 styles, which include ladies’ rings, wedding bands, men’s rings, and pendants.) Once the design is complete, the system quotes pricing, and, with the customer’s agreement, the electronic file is sent to Stuller to be created in wax and cast. Jewelers can also have Stuller set the gems and finish the piece, if desired.

CounterSketch Studio, say judges and users, introduces jewelry design software that takes a leap forward, with a complexity and flexibility that surpasses anything currently available. It involves a transformation in manufacturing systems, and it’s also a solution for jewelers that reduces their need for inventory and enhances the in-store experience. For many, it’s the counterpunch needed to survive a down economy—and enter into a whole new way of doing business.

Note: This is an abridged version of the article that appears in the December 2010 MJSA Journal. To learn more about the development of CounterSketch, the reactions of jewelers who are using it, and the way it is evolving the art of custom design, you can order a copy of the full article at mjsa.org, or subscribe to MJSA Journal.