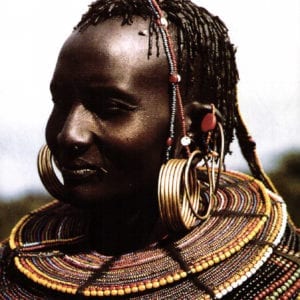 People have gazed at adorned ears for many millennia. Discoveries in tombs and old legends tel of how ears were decorated in previous cultures. The rings or pegs worn in the ears were not simply intended as ornaments. They were also regarded as talismans to ward off danger and illness. Furthermore, in the ancient high cultures, they were part of the national dress or status symbols as part of the clothing worn in certain professions. 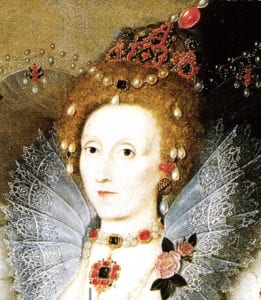 Portrait of Elizabeth I by Marcus Gheeraerts the Younger, courtesy of the National Portrait Gallery, London 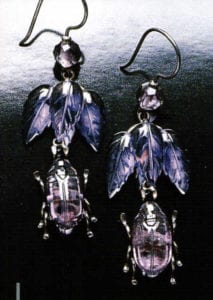 Dangling earrings made of metal with amethysts, 2nd half of the 19th century, Museum in Idar-Oberstein 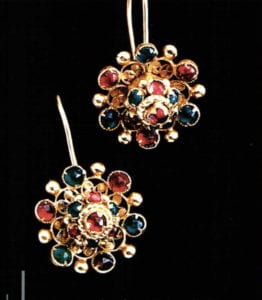 Earrings made of gold-plated silver, some filigree work and with glass stones, 2nd half of the 19th century 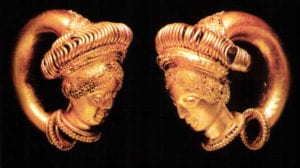 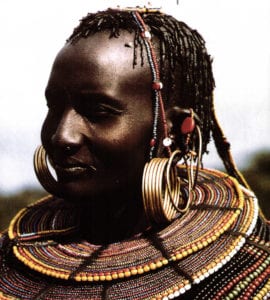 As early as the pre-ceramic phase of the Early Stone Age, ear pegs and studs were commonplace in Asia Minor and in Egypt. Similar forms spread throughout Central Europe also with the Linear Pottery Culture. One of the oldest ear ornaments in a boat form originated in Mesopotamia (3,000-2,400 BC). Gods and rulers are depicted on earrings in frescos and stone relief work from Ancient Babylonia and Iran. Men and children wear this jewelry in equal measure. 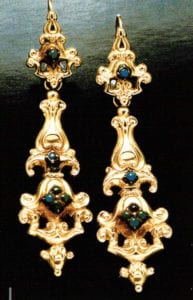 Dangling earrings made of gold with turquoise, 1840-50, Municipal Museum in Schwäbisch Gmünd

These adornments were also role models for the ear jewelry worn by the Etruscans, Greeks and Romans. In the second century BC, the Egyptians produced artistic ear jewelry mostly encrusted with stones, cords arranged in a box form and enamel; in turn, this served to inspire the Byzantines. The Byzantine fashion of adorning ears exerted influence on the entire Mediterranean region, even extending to Africa and Persia. This style also fashioned ear jewelry in the Islamic regions, in Greece and in Spain. This tradition has remained very much alive until the present day. For example, it is standard practice among Turks to pierce ears in order to identify female infants. 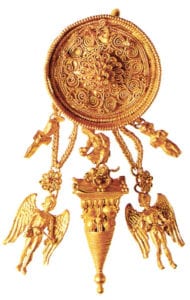 Head jewelry, attached to the ear by a brace, by Miss Morikawa, gold and animal hair

In terms of the materials and techniques, earrings of previous centuries are in no way less intricate than their more modern counterparts. Gold, silver, filigree casting techniques, stones and pearls were used just as much as surrogate materials, for example cast glass and enamel. Differentiated clasp systems were familiar, and not just simple ear hooks for suspension. For example, there is a pair of silver earrings in the form of a crescent moon from Albania, dating back to the 7th/8th century AD, that was worn using a thread snaked around the ear. Therefore, the problem of wearing ear jewelry without piercing the ear was also a familiar factor in bygone cultures. In the Neolithic Age and the early Bronze Age, simple rings made of copper were used. The Menoic and the Mycenaean culture also developed ear jewelry in the form of rings. In Greece, a crescent-shaped main type and a disc were combined with attached pendants. There are also cases of spirals being used. The earrings in the Hellenistic period also ended in stylized portrayals of animal or human heads. It is said that only women wore ear jewelry in Greece. Luxurious ear jewelry experienced a golden age very early on. For example, the Roman poet Seneca complained that “those foolish women seem to believe that their men were not burdened enough unless they were wearing two or three inheritances in their ears”. 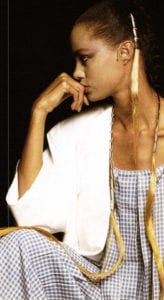 The period of tribal migration was familiar with numerous artistically designed forms. As pictures and finds have shown, earrings did not have any real substantial role in medieval times. They were worn more frequently in the 16th century. Pear-shaped pearls were common in the first half of the 17th century, before being replaced by gem-encrusted, suspended earrings after 1650. Loops with pendants were fashionable in the 18th century. Indeed, around 1800, a closed ring form reminiscent of ancient counterparts was en vogue. Creoles were derived from jewelry worn by cultures outside of Europe. Dependence between earrings and hairstyles has been particularly apparent in the shifting fashions since the 19th century. In the late Middle Ages, European men also started wearing earrings. There are numerous preserved portraits, especially from the Biedermeier era, that serve as proof of this. In addition, professional groups such as shepherds, soldiers, sailors and craftsmen, but also peripheral groups such as gangs of robbers or gypsies, developed earrings as signs of affiliation or status symbols. 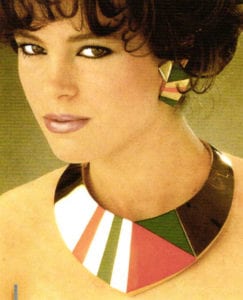 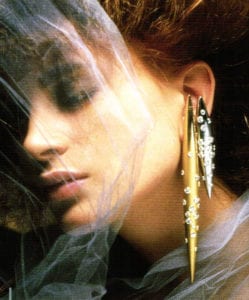 Earring worn on one side from the eighties in gold, platinum and with diamonds

Ear jewelry has a significant place in national costumes as a symbol of prosperity. In addition to its function as Jewelry, it also has an important role as amulet or remedy. For example, in his study on men’s earrings, the anthropologist Leopold Schmidt has proven that they were worn primarily as a remedy for eye disease and to improve powers of vision. Even the act of piercing an ear was seen as a help, as people believed that the fever and pain could in this way escape through the ears. Belief in the healing powers of gold played a significant part in wearing earrings. Popular belief was that this would put people on the safe side in the treatment of eye inflammations, eczema, eye secretions, head and earache, rheumatism, back diseases and gout. 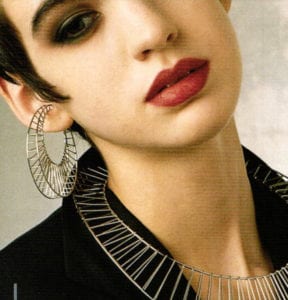 Heavy metal with filigree design, earring and necklace made of platinum 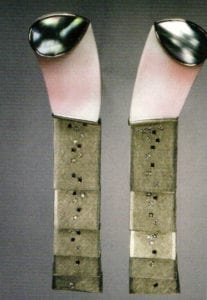 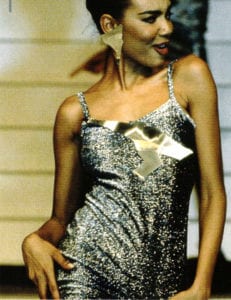 Women wore earrings on both sides during the 19th and 20th centuries. The long, suspended earrings in particular accentuated the symmetric form of the head and supplemented the necklaces frequently worn in the 19th century with pairs of bracelets worn around the wrists. This understanding of harmony, which drew on inspiration from ancient times, also moved the architect Gottfried Semper in a lecture published in 1856 to see in this a legality that he believed also to be manifest in architecture. According to tectonic rules that he derived from this, he claimed that a distinction could be made between three different forms of jewelry: the suspended, the rings and the targeted jewelry. In suspended jewelry, in other words earrings, he believed that symmetry was the central, aesthetic principle: “Suspended earrings are an integral part of symmetrical jewelry, which, as freely suspended bodies, are prepared for the moment of calm and balance by the varied oscillation of each movement, followed in turn by repeated movement. At the same time, in the moment of calm, its contrast of vertical lines with the curved lines of the organic form causes the latter to be emphasized in its vivacious grace. In this way, by symbolizing a vertical line and attending to the laws of gravity, suspended earrings underscore the curve of the nape, which is so independent of the pull of gravity.” 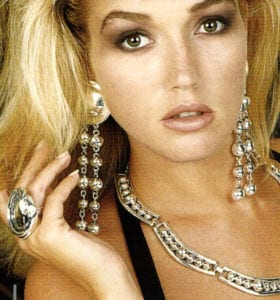 Earrings based on antique models made of silver by Werner Gross 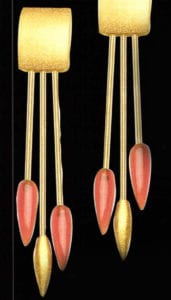 He did not believe that a single earring or a pair of different lengths or weight were appropriate. Accordingly, to him and to many others, a small ring worn by men in one ear could not be jewelry, but instead a symbol of superstition. The assessment in a study on worn jewelry from the end of the nineteen sixties should be seen in this sense also. There, the author claimed that wearing one single earring was not to be recommended. It may well correspond with a dress that only covers one shoulder, but it would be more likely to create the impression that the pendant had been lost and that the jewelry was incomplete. 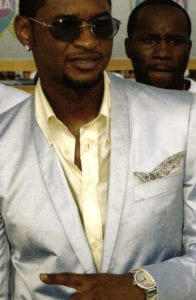 The singer Usher Raymond with diamond earrings at the MTV Awards 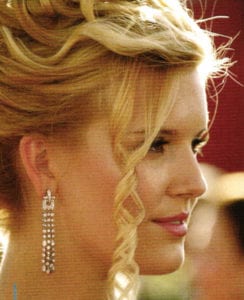 At the end of the 19th century the suspended earrings popular in Biedermeier and Classicism were superceded by fashionable buttons. During Art Nouveau, which drew greatly on colliers and belt clasps, earrings were neglected. But the bob haircut of the twenties reinstated them to popular fashion. Once the National Socialists had seized power, earrings were frowned upon. The carefully undulating, short haircuts were intended to do without any accents. In the fifties, clips imported from the United States replaced the traditional pins. After the Second World War, starfish made of ceramics and blossoms and fruit made of anodized aluminum were particularly coveted. The youth culture of the seventies and eighties brought significant transformation. Protagonists of youth culture enacted a change of philosophy among women and men. Asymmetrical patterns in one ear and men wearing earrings became symbols of a non-conformist lifestyle and an oppositional attitude. 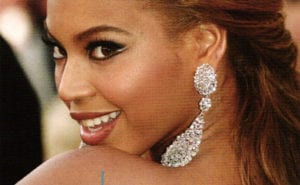 The fashion that has advanced within the framework of piercing several holes along the edge of the ear has wakened the interest of doctors who offer acupuncture. The reason according to their teaching, these are projection points for important organs and this will restrict their treatment. A curious fact to note is that as late as the middle of the nineteen eighties, there were judgement banning police officers and customs officials, for example, from wearing earrings on the job.

All articles by this author
Previous Marriage Rites: The Ring as a Symbol of Eternal Faithfulness
Next Material Thought of Jewelry Journeys
Social media