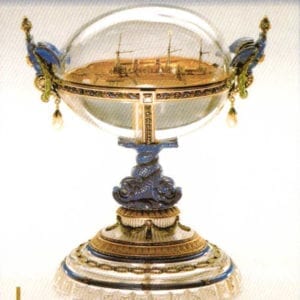 Fabergé: Jeweler to the Tsars

Fabergé – the name carries special significance even today. It is inextricably linked with the glamour of pre-revolution Russia. Fabergé’s expensive Easter eggs, produced for the Tsar’s family and other high society figures of the 19th century, represent a magical era in goldsmithing. Fabergé was in ingenious businessman and jeweler who used ingenious system to supply all of Europe with beautifully crafted tins, cigarette cases, chalices, chocolcate boxes, perfume bottles, watches, writing accessories, pictures, mirror frames, stick handles, flower arrangements made from precious metals and gemstones, animal figurines carved from expensive stone and, of course, jewelry. In total, more than 150,000 valuables bear the Fabergé signature, alongside  that of the master goldsmith. 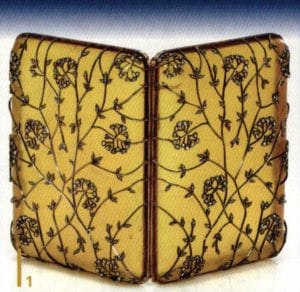 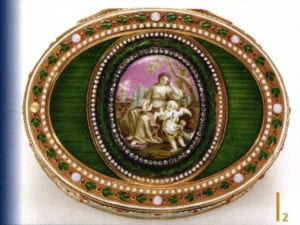 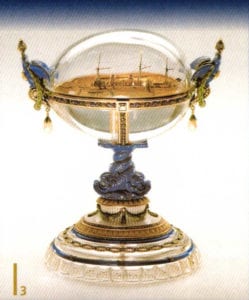 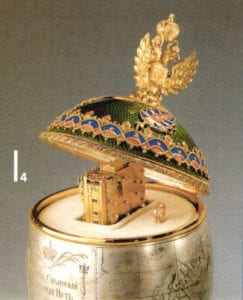 The Fabergé goldsmithing dynasty is of Huguenot descent and originally comes from the Picardy region. The family initially fled to Schwedt an der Oder. In 1800, the grandfather of the family’s most famous son, Peter Carl – later known as Carl Fabergé – moved to the Baltic where Gustav (1814-1894) was born. Gustav completed studies in goldsmithing in St. Petersburg and opened his first workshop in 1842. His two sons from his marriage to Danish-born Charlotte Jungstedt established a jewelry emporium from these humble beginnings.

Fist, however, the family moved to Dresden in 1860. During this time, Gustav Fabergé left his business in the hands of his friend and partner. After completing his studies at the Dresden school of business, Carl Fabergé departed on an apprenticeship and studies tour which took him to Frankfurt am Main. Here, he worked for the jeweler Friedmann. He went on to complete placements in Florence, where he learnt the art of stone carving, and then to London and Paris. In 1870, Carl entered his father’s business in Petersburg which he went on to manage two years later.

The work he completed with his brother Agathon to restore and catalogue the Hermitage jewelry collection triggered a desire to create his own pieces, both in the old Russian style as well as accurate replicas of originals. But this was just the beginning. The real break-through followed work carried out for the Tsar’s family, in particular the famous Easter eggs, leading to Carl Faberge being awarded the title of ‘Goldsmith by special appointment to the Imperial Crown’ in 1885. The company was awarded a gold medal for its gold replicas of the Scythian treasures of Kerch, produced for an exhibition in Nuremberg by the chief goldsmith at Faberge (Kollin). 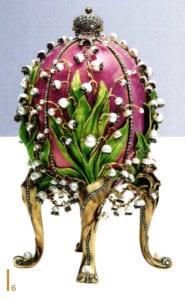 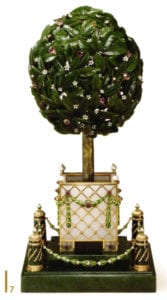 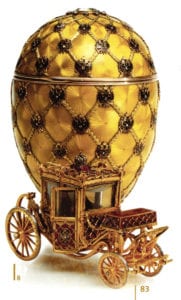 Kollin was also credited with having developed the idea of combining the traditional Russian Easter customs with the art of goldsmithing. Master jewelers Perchin and Wigström subsequently applied this idea to the expensive eggs. In total, 56 of these eggs were produced in gold, enamel and gemstones and contained, amongst other things, a golden coronation carriage, castles, a ship, a Trans-Siberian train, a chicken and many other miniature surprises hidden inside, all perfectly formed down to the very last detail.

The pieces are between 9 and 12 cm high and can be opened like a can. This ingenious perfection even extends as far as one of the eggs appearing in the form of an orange tree. Pressing on one of the fruits reveals a tiny nightingale which can beat its wings and even sing. Fabergé’s gold-enameled peacock can also move its head and fan out its tail while a tea rose bud piece folds out to reveal a crown set with diamonds and rubies.

Fabergé was also a name linked to many other courts, given that the Tsars family is related to most of the European dynasties and royal lines. However, it was not just within these circles that Fabergé’s works of art were given as Christmas and birthday presents. With this success, the ‘Fabergé system’ was developed. Most of the works may bear the names of his master goldsmiths, yet he hardly created any of them himself. What’s even more surprising is that, despite the wide range of influences – from Historicism to Art Nouveau – the Fabergé style also contains elements of the Renaissance, Baroque, Rococo, Empire and Scythian forms. The range of products also included Western style fashion jewelry and rhinestone series productions using non-precious metals. At the height of its success, the family owned branches in Moscow, Odessa, Kiev and London and employed more than 700 people – 500 at its headquarters in St. Petersburg alone.

Some 150 000 items were created from 1882 to 1917. In 1897, Fabergé was also appointed court goldsmith to the Swedish and Norwegian royal court. Following the World Exhibition in Paris (1900), he was knighted and awarded the title of ‘Maitre’ by the Parisian Guild of Goldsmiths. The company skillfully mastered enamling, guilloche, gold alloys in various different colors and niello. The inclusion of steel, copper, beautiful woods and even simple stiffeners shows that it was not just about precious materials – it was the design and processing which mattered. Legend has it that Fabergé kept a hammer in his desk which he used to destroy any item which didn’t meet his high standards.

The inexhaustible riches of the Russian aristocracy and young Moscow-based nobility also began to attract French jewelers. In 1904, Cartier decided to approach Fabergé – the Tsar’s favorite jeweler – in Russia with targeted purchases and orders which could then be sold on in Paris as their own creations. These items included pieces produced in the workshops of the St. Petersburg master himself. Cartier soon began producing its own stone animals, flowers and enamel objects in the Fabergé style in Paris, selling them with increasing success to the European customers. Local artists began to protest in 1908 when the Frenchman declared a desire to settle in the Russian capital. However, these objections were in vain as members of the Russian imperial family offered protection to this Parisian master.

The First World War saw the House of Fabergé start to decline. The workshops were ordered to produce hand grenades and the disturbances of the Russian revolution ended Fabergé’s business once and for all. Carl Fabergé sold his shares to his employees and fled to Finland and later to Wiesbaden. He died in Lausanne in Switzerland and was buried with his wife Augusta in Cannes. When the age of the Tsars was finally over, the Bolsheviks seized all of the Easter eggs they could get their hands on. 40 of them were sold abroad; today 10 of them can be found amongst the armory of the Kremlin, along with some of the expensive Romanov jewelry. 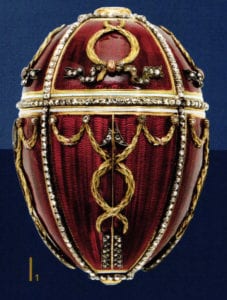 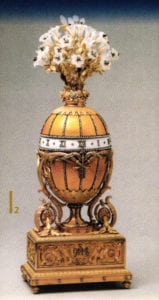 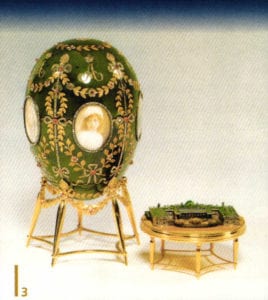 The remaining eggs are distributed throughout the world, both in museums and private collections. In February 2004, Russian oligarch Viktor Vekselberg purchased the private Fabergé collection of the American family Forbes shortly before they intended to auction the pieces off at the Sotheby’s auction house. Vekselberg paid around 100 million US-$ for more than 200 Fabergé pieces including nine of the Tsar’s Easter eggs and six other eggs. “The Fabergé eggs touch the soul of our people,” said the millionaire after making the purchase which brought many of these valuable treasures back to Russia.

Fabergé today – the resurrection of a legend

“He who throws out the old will not keep the new for long”. This maxim underlies the work of jewelry manufacturer Victor Mayer in Pforzheim even today. The company archives show that Fabergé style jewelry and enameling work was supplied to St. Petersburg even before the First World War.

Carl Fabergé was a master of increasing productivity through outsourcing. In addition to his main workshop, there were numerous other jewelry studios working to complete the work for these purveyors to the court. Those contracted to work for Fabergé as an external master goldsmith were able to use the workshop space rent-free and did not need to supply their own materials or tools. Fabergé, his sons and designers concentrated on coming up with new ideas and precise designs. The technical execution was left to the craftsmen and workshop supervisors. Jewelry produced in Fabergé’s various branches was stamped by the relevant master of the workshop or by Fabergé’s main master goldsmith in cases where the item was processed in several of the workshops. In this case, the works were presented for approval and stamped with Fabergé’s hallmark.

Fabergé’s sons Eugen and Alexander hoped that the label would make a comeback in Paris, but it failed to do so. In the 1950s, they sold the rights to the name. With the re-discovery of the ‘last master’ Victor Mayer in 1989, the resurrection of the legend began.

Today the company still follows the ancient traditions of craftsmanship used by Carl Fabergé in the 19th century. Only the coal-fired ovens have changed, switching to electrically-controlled precision devices. The circle has therefore closed and the tried and tested principles of craftsmanship have been resurrected.

This Pforzheim-based manufactory is now the only business authorized to use the ‘Fabergé’ hallmark (now written in Latin script). This is followed by the stamp VM for the master Victor Mayer. The designs for today’s items and pieces of jewelry are created by international designers and managed by the Mohr-Mayer family. The precise designs are sent to Faberge expert Archduke Dr. Géza von Habsburg and the Fabergé design committee to analyze.

The first Fabergé egg to be officially re-instated in the Kremlin following the October revolution was the Gorbachev Peace Egg which was dedicated to the former president of the Soviet Union in 1991 to mark the bestowal of the Nobel Peace Prize. There are a total of five copies of the egg. Two are accessible to the public – in the Kremlin Museum in Moscow and the working copy handed to the Schwabach Museum in 1993. 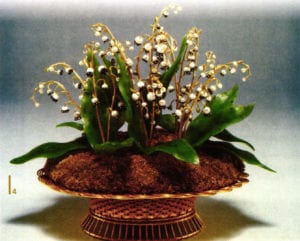 Emperor’s lily of the valley basket, 1896 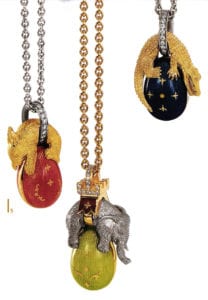 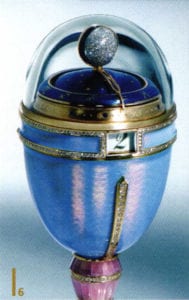 The re-introduction of Fabergé to Russia was celebrated with a gala event in the Kremlin armory in Easter 2001. The exhibits included Victor Mayer’s most expensive egg for Faberge, the Moon Phase Egg. Production of the work took more than 18 months. The piece shows the phases of the moon in a rock crystal dome, while the hours are shown in a small viewing window made from the same material.

Enameling is Victor Mayer’s specialty. The Pforzheim-based operation exceeds the quality of the previous works in this respect at times. The careful finishing of the enameling work, which gives the pieces their characteristic shine, involves the same stages of work even today: the enamel powder is mixed with fluid and the paste is then applied with a fine brush or spatula, then fired. This process is repeated up to ten times. Only then can the surface be cut and polished by hand and fired in the oven one last time. Victor Mayer, like Faberge, has no qualms about combining expensive jewels with less expensive gemstones, wood and natural enamel and in all colors of the rainbow. Every piece is created according to the individual color requirements specified.