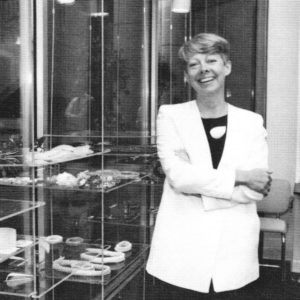 This is the first in a series on galleries that specialize in jewelry and metalwork. The Vo Galerie is a European Jewelry Showcase in the American Capitol. See below for related articles.

The new wave of European jewelry that has been lapping at America’s shores for two decades may be approaching high tide. In June of 1984, “Jewelry International” was shown at the American Craft Museum II in New York City, the first wide-ranging survey of innovative European jewelry to be seen in this country. And in September, the VO Galerie opened at 2000 Pennsylvania Avenue in downtown Washington, just four blocks from the White House, offering the first comprehensive collection of such work for sale to the American public.

Until quite recently, the movement that began in Holland and Britain in the early 1960s was known in this country principally to those who, by profession or avocation, follow new developments in jewelry design. Collectors visited Galerie Ra in Amsterdam or Electrum Gallery in London and bought a few pieces; metals teachers on travel grants saw exhibitions in the Schmuckmuseum or Goldsmith’s Hall and brought back catalogs to show to their students; gallery owners saw the work of Emmy van Leersum or David Watkins, but few ventured to test the American market. The rare exhibit that came to the United States, like “Objects to Wear” in 1970, may have inspired some American jewelers, but it evoked little public notice or response. 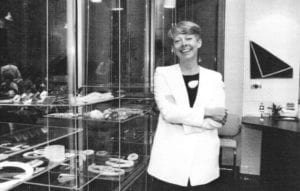 Joke wan Ommen beside the window display at VO Galerie

In December, 1981, however, “Good As Gold: Alternative Materials in American Jewelry” opened at the Renwick Gallery of the National Museum of American Art in Washington and for the next three years toured the United States. Though consisting only of pieces by jewelers working in this country, the exhibition affected attitudes towards European work as well. It legitimized, for the American public and for American jewelers alike, unconventional materials and forms, and it suggested a reexamination of some basic preconceptions about jewelry itself. “Good as Gold” was followed by the smaller, more radical “New Departures in British Jewellery” at the American Craft Museum in 1983 and by “Jewelry USA” and “Jewelry International” a year later.

Still, it is one thing to mount a museum exhibition devoted to innovative jewelry and quite another to open a rent-paying, tax-paying gallery to sell such work; and it took a good deal of courage for Joke van Ommen, a Dutchborn jewelry designer, and her partner, Jan Maddox, a metals teacher, to launch the VO Galerie. Little work of the sort they intended to show had ever been seen in Washington, and since it had never been offered for sale in such profusion anywhere in the United States, no one could forecast the public’s response. 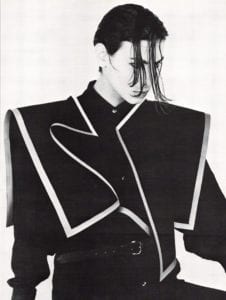 This 1984 paint and canvas neckpiece by Joke Brackman and Claudie Barbée (Holland) raises the question whether there is any clear dividing line between jewelry, defined as body adornment, and clothing

The VO Galerie reflects van Ommen’s philosophy and experience, shaped by innovations in Dutch jewelry during the late 1960s and 1970s. After earning her Doctorate in art history at the University of Amsterdam in 1974, van Ommen began to work in jewelry as an apprentice to Erika Leitner in Zambia. She moved to Vienna in 1976 to study at the Hochschule für Angewandte Kunst and privately with Peter Skubic. Two years later she returned to Amsterdam as an independent jewelry designer; and by 1980, when she migrated to the United States with her American husband, her work had been exhibited widely in Europe.

At first, van Ommen felt artistically estranged in this country. She found herself philosophically at odds with much of the jewelry being made here, with its stress on technical virtuosity and sculptural form. By the same token, few American jewelers, galleries or buyers seemed to understand her work or the objectives it embodied. With the passage of time, however, van Ommen has come to feel more open to work being done here, while many American jewelers have seemed to move closer to her own concept of what jewelry should be. In consequence, the VO Galerie shows pieces by such Americans as Robert Ebendorf, Gretchen Klunder-Raber and David Tisdale alongside the European work. And as a further sign of this rapprochement, in the year that the VO Galerie opened van Ommen’s work was awarded the grand prize in Ornament magazine’s jewelry design competition. 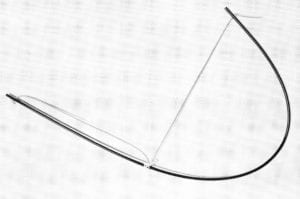 This 1982 neckpiece of plastic tubing by Julia Manheim (England) exemplifies the graphic quality of much new European jewelry, innovative approach to attachments and a desire to allow the wearer to participate in shaping the piece. By sliding the short piece of tubing along the long one, both the size of the neck opening and the shape of the piece can be changed. Photo: Colin Cuthbert

The gallery carries the work of 50 to 60 jewelers in its permanent collection at any one time. Most of it is displayed on simple, clear plexiglass shelves ingeniously suspended between floor-to-ceiling steel rods, and in one large glass case. Additional pieces are kept in a set of drawers by the sales desk. Regular artists include such leading international names as Susanna Heron, Paul Derrez, Georg Dobler, Esther Knobel and Therese Hilbert, and lesser-known talents such as Eleonoor van Beusekom, Laura Biscotto, Giorgio Cecchetto, Malka Cohavi and Liesbeth Rahder. 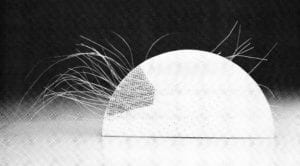 This 1984 brooch of paper, thread and screening by Marjorie Schick (United States) shows remarkable sensitivity in the use of everyday materials. By punching holes in the paper, a delicate white-on-white pattern is created in the large, solid shape, which is also set off against the fine lines of thread and screening. Photo: Joel Degen

Five or six times each year, VO Galerie features a larger body of the work of a single designer. The 1985 schedule exemplifies the gallery’s adventurous approach. It includes two exhibits of fabric neck and body pieces, one by Susan Sanders, a young American working in New Paltz, New York, and the other by Joke Brackman and Claudie Barbée, well-established Dutch jewelers. Another Dutch designer, Hermann Hermsen, will show both jewelry and lamps. Additional shows arescheduled for Friedrich Knupper, a German with a growing reputation, and for Joanna Hess-Dahm, the Swiss jeweler. These will be the first American exhibition for all of these artists.

The work shown at VO Galerie embodies van Ommen’s personal concept of jewelry. She believes in jewelry, first and last, as body adornment, not as sculpture in miniature. Like Otto Künzli’s thumbtacks, it need not be interesting when lying on a shelf, but it must spring to life when worn. It is the direct relationship to the body or to clothing that validates a piece as jewelry. With this basic criterion in mind, van Ommen looks for work that embodies a striking idea about adornment—something original, clever, provocative, witty or elegant—in the form, the materials, or the way it is worn. 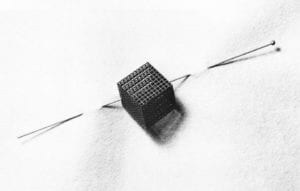 This 1984 brooch of lacquered steel and oxidized silver by Friedrich Knupper (Germany) illustrates how technical perfection can serve a concern for delicacy. Because the pin can be inserted in the cube in infinite ways, the wearer determines the brooch’s configuration.

Noveltry, however, is not enough: the idea must be well-developed, the resolution practical, the materials logically related to the design and function and the craftsmanship impeccable. Except as part of a larger body of the work of a featured jeweler, the gallery does not show the experiments of some Europeans that test the boundaries of wearability. The focus is on work that appeals to van Ommen’s own esthetic—jewelry that displays a delicacy and sensitivity and that can give enjoyment to both wearer and viewer.

Having studied, worked and exhibited in Europe, van Ommen knows personally most of the jewelers whose work she carries, and one of her motives in establishing VO Galerie was to provide her friends with the American outlet they had long been seeking. But her principal objective was to create an American showcase for the new, European-based approach to jewelry, to expose it to a public to whom it was quite unfamiliar and to test her belief that Americans would respond favorably to its inherent merit. 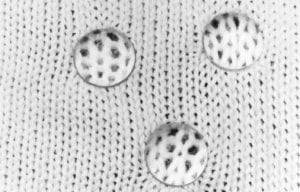 These 1981 multiple brooches by Maria Hees (Holland) are made of plexiglass, shaped to magnify the fabric, to which they are attached from behind with a rubber ring. The fabric thus participates in the jewelry.

In fact, the public’s initial response has confounded the skeptics and cheered the gallery’s owners. The typical window-shopper reacts with curiosity, amazement and delight. Predictably, among the most accepting are people who have traveled or lived in Europe, many of them workers from the nearby offices of the World Bank: and collectors are among the major purchasers. But stereotypes don’t stand up: Middle-aged men in three-piece suits are delighted to find something new and different to buy for their wives. And surprisingly, although the gallery sits on the edge of a university campus and carries much inexpensive work, few students are among its customers. Most buyers are in their 30s and older. 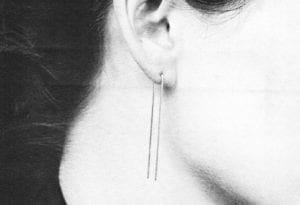 This 1981 earring of 14k gold by Hermann Hermsen (Holland) achieves three-dimensionality with a single wire.

With sales and clientele growing, one can hope for financial viability, but it is still much too early to tell. Regardless of its commercial success, however, VO Galerie has already demonstrated what its founders hoped to prove: that Americans will accept—enthusiastically—the new approach to jewelry that the gallery represents.

Roger Kuhn, an enamellist living in Bethesda, MD, is currently president of the Washington Guild of Goldsmiths.

All articles by this author
Previous Gary Griffith’s Jewelry and Constructions
Next Galleries: The Yaw Gallery
Social media