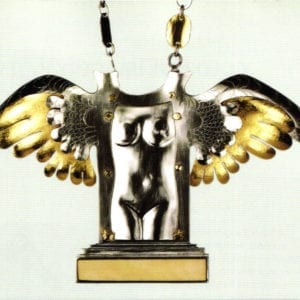 Ivory and bone have been used by humans for sculptures and jewelry purposes from very early times. The Upper Paleolithic age already boasted curious etchings of reindeer, scratched onto mammoth tusks. The figures of the Vogelherd Caves near Ulm are also well-known. From ancient Egypt and Mesopotamia came talismans, sculptures, and implements from the 3rd century BC.

The Greeks were familiar with ivory long before they were ever confronted with an elephant. Ivory carving is also mentioned early in Roman history. Christian art brought the working of this material to perfection. Ivory carving received a significant impetus in the 14th and 15th centuries. The works in this material were now increasingly used for profane purposes, becoming a luxury item for the high society of the age. The great flowering of ivory carving took place in the 17th century. This art was a fashion statement. A number of sovereigns even tried their own hands at working the material and large collections were built up. Count Franz zu Erbach (1734-1823) was responsible for the settlement of a large number of ivory carvers in the Odenwald town of Erbach, near Heidelberg. The town remains the German center of this art form to this day. The German Ivory Museum is also located here. In neighboring Michelstadt the wood and ivory vocational school trains the next generations of craftsment in those materials.

Ivory was used for a broad range of utilitarian and ornamental purposes in the 19th and 20th centuries. These included the tops of walking sticks, billiard balls and piano keys. As a consequence, the principal supplier, the elephant, was driven to the edge of extinction. As a result, in 1989 trading in ivory was prohibited worldwide. Only existing stocks were permitted to be utilized. The most valuable ivory, however, was not obtained from elephants, but the narwhal, and was formerly literally worth its weight in gold. Equally precious is walrus ivory which led to the decimation of walrus populations. Today, mammoth ivory is used as a replacement for elephant tusks. These are the tusks of the animal that became extinct during the last Ice Age. The material was conserved in the Siberian permafrost for over 10,000 years. Erosion leads to tusks frequently making an appearance on the surface. Each tusk that appears is examined for mammoth research purposes and then released to be traded. 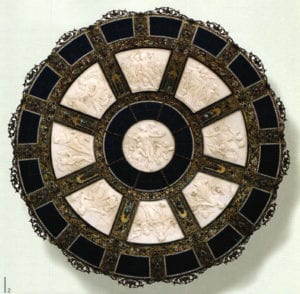 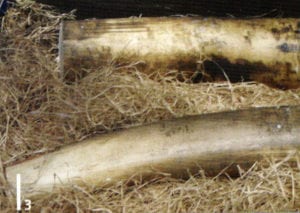 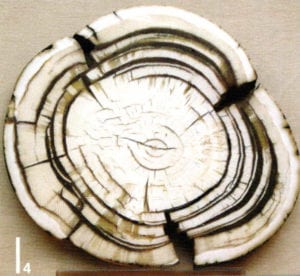 Cross section of mammoth ivory with cracks due to environmental influences 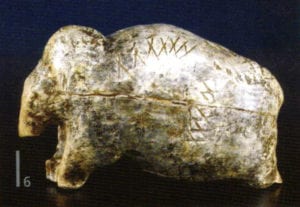 Ivory mammoth from the Vogelherdhohle in Germany

Bone has been worked by man since the very earliest times, due to the fact that it was a natural by-product of hunting. In addition, it is also very good to work with and highly stable. To begin with, it was fashioned into utility items such as needles, spear tips, fishing hooks, buttons and combs, which were made from bone as the finer structure was easier to work than wood. Large bones, such as the ribs of whales, were used by some early civilizations in the construction of tent shelters. Over the course of time these utility objects became increasingly ornate and artistic in character. Bone carvings became more detailed. In spiritually-oriented cultures charms and figures were created, often serving shaman cults. In New Zealand the Maoris developed these bone carvings into an art form in its own right. The natives considered each bone item of jewelry to have a high level of spiritual energy. Such an object served to intertwine the soul and energy of the donor animal with the soul and energy of the wearer. Today, modern jewelry designers combine precious materials such as gold, silver and gemstones – conveying an aura of classicism – with bone – representing the pre-classical, the archaic. This enables a bridge to be constructed between the prehistory of jewelry with all of its myths, cults and rituals; and the modern age.

Ivory in the workshop

Ivory consists 56-59% of calcium phosphate and a small quantity of lime, which is bound with an organic substance similar to gristle. Water is contained within this. During the drying process, ivory loses approximately 20% of its weight. The hardness of an elephant’s tusks registers approximately 2.75-3.50 on the Mohs scale.

The working process of ivory is performed with chip removal. The grain must be noted at all times in this procedure. It is also vital that the material is not overheated. Working against the grain leads to the surface being torn. Splintering occurs, which can only be rectified with the removal of relatively thick layers of ivory. The poor thermal conductivity of ivory means that special care should be taken when using rotating tools and machines (overheating). The material turns yellow, smells burned and becomes stained. Depending on the size of the object, it is cut using a circular saw, band saw or hand saw. The saw blade is straight-set, with the basic shape formed using a paring chisel. In this, it should be noted that when “carving” ivory it is only possible to remove small chips compared to the same procedure with most types of wood. The preparatory work is performed using coarse shapers, rasps and files. Finer shaping work is executed using drills flushed with water, similar to those used by a dentist. The surface is smoothed by rubbing.

The dense structure and relatively low hardness of ivory means that it is especially suitable for turning. Submersion in boiling water (approximately 20 minutes) makes the material pliable. Forming of the material must be performed extremely carefully, with the ivory in constant contact with the hot water. The sanding of ivory is performed using a paste of pumice and water. Depending on the type and size of the surface area, tools used include linen cloths, nylon toothbrushes, modeling tools covered with a strip of linen, felt or a buffing wheel that has not previously been used for polishing metal. Best results are achieved working alternately in a horizontal and vertical direction. Good polishing results are achieved with Vienna lime and precipitate chalk, mixed into a paste with spirit.

Ivory can be cleaned using mild soap suds or warm water with a few drops of washing liquid added. Stronger grease removing materials such as liquid ammonia or a mixture of equal parts liquid ammonia and spirit are only of use for older, heavily-soiled objects. Ivory that has yellowed heavily can be lightened by being placed in a bath of water containing a little hydrogen peroxide for three to four days.

Numerous techniques are used for the assembly of ivory with metal. The metal can be pressed where the design of the item permits. With rivets, it should be noted that the rivets should connect with a metal casing on both sides where possible. The rivet head can only be safely hammered directly into the ivory where a very soft alloy is used, otherwise splitting may occur. In contrast, the pinning with small pins turned from horn represents no problems, as these are elastic enough to compensate tension. When creating a screw connection, care should be taken to ensure that the threads are not too sharp and steep. The least risk is involved in the adhesion of ivory to metal. The section to be adhered should be free of grease and slightly roughened. Only two-component adhesives are suitable for creating a durable bond, with these having largely displaced traditional ivory putty. Mammoth ivory is one of the hardest materials in this range (Mohs hardness 3-5). Consequently, here it is possible to work very precisely, even with very small dimensions, without the material breaking. The long period of storage in the ice has left its mark on the tusks. The organic material has often reacted to the metallic oxides in the soil. This leads to discoloration, ranging from brown-red to green and indigo blue. These tones can be incorporated well into the design of sculptures and jewelry items. Cracks can also be closed attractively with the insertion of colored gemstones such as lapis lazuli, malachite or turquoise. The varied grains and degree of cracking mean that each object has its own individual structure and subsequently unique character. 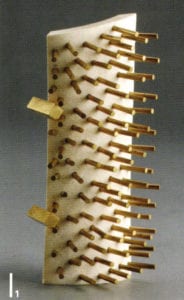 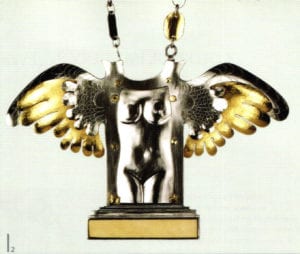 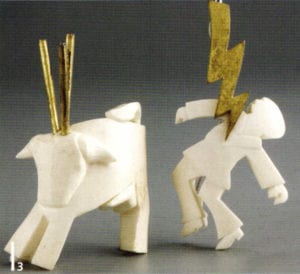 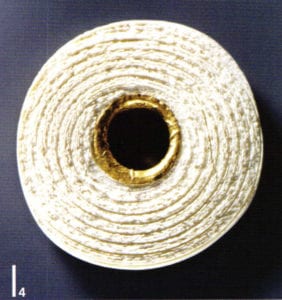 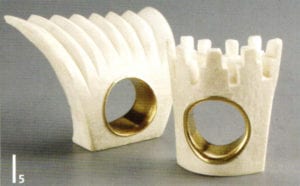 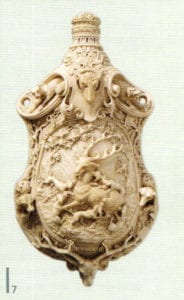 Bone in the workshop

Leg bones are best suited for working. These are tubular bones originally filled with bone marrow. There are six different forms of leg bone, in addition to the metatarsal and lower leg bones, upper arm and upper leg bones. The tubular bones are all hollow. This means that only one side of the bone is used, although this may be over one centimeter thick. During the working process, the difference to mammoth and elephant ivory becomes apparent with the brittle nature of the material. Bone is also considerably less elastic. Despite this, the same tools are used as those for mammoth ivory. The difference is not always immediately apparent with finished articles. It is only when the precise structure is inspected that the difference in the materials becomes evident. Elephant ivory can be distinguished from mammoth ivory and other materials by two characteristics. These are the horizontal and the vertical structures. Horizontally, a net form is created by two overlapping lines. The angle between these lines is more acute for mammoth ivory (more comparable with Gothic) than with elephant ivory (more comparable with Roman). Regarding the vertical structure, there is a so-called flame structure of light and dark lines, irregularly thicker and thinner. Jewelry made from horn or leg bone is cleaned with almond oil, thus acquiring its original color once again.