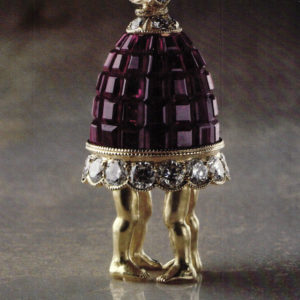 This is a continuing series on galleries that specialize in jewelry and metalwork. The Yaw Gallery is owned and operated by Nancy Yaw. See below for related articles.

The town of Birmingham, Michigan is an affluent suburb of Detroit. Aside from its beautiful houses, fine shops and theater, Birmingham is considered to be the visual arts center for the metropolitan area. Located in the neighboring township of Bloomfield Hills is Cranbrook Academy of Art, internationally renowned as an architectural masterpiece of the late Eliel Saarinen and for its excellent art program. Nancy Yaw is a native of this area, and it was here that she began her career as a gallery owner 24 years ago.

As a dealer, Yaw’s involvement in the arts has taken many routes. Her business began as a fine arts gallery in Jacobsen’s department store. The gallery’s focus at that time was on the publishing and sales of European artists’ prints, an endeavor Nancy Yaw shared with Jilles Abrioux, a private dealer in Chicago. Five years later, she and her husband leased space on a strip of storefronts where they established the Yaw Gallery.

Yaw conceived the notion of developing a gallery strip in Birmingham, and through her initiative and input this strip now houses seven of the finest galleries in the area. Often playfully referred to as a “culture gulch,” this conglomerate of diverse galleries allows the public to park once and see seven entirely distinct bodies of work. The more noted galleries on this strip are: the Halsted Gallery—photography; the Donna Jacob Gallery—ancient art; Cantor-Lemberg—prints; and Xochipilli—avant-garde fine arts. The Yaw Gallery, now dealing exclusively in metals and furniture, has represented crafts for nearly 20 years. 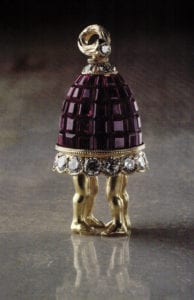 In the late 60s and early 70s much energy was focused on the crafts, clay in particular. Peter Voulkos and others broke the boundaries of function and brought clay out of the realm of pottery, using it as a medium of expression. Interest in glass was also on the rise. Harvey Littleton, seen as the father of the studio glass movement, opened the doors for glass, as his students set up satellite programs for glass across the country. Yaw was moved by the excitement surrounding the crafts, and it seemed inevitable that she would eventually devote her business to them.

In 1968 Yawls commitment to crafts was assured. Having been encouraged by Richard DeVore and Robert Kidd (at that time chairmen of Cranbrook’s ceramics and fibers departments respectively), she mounted two major shows at the gallery: “Pillow as Concept” and “Clay: Anatomic and Geographic.” The artists’ excitement and the public’s enthusiasm for these shows were factors that confirmed Yaw’s decision to deal in crafts exclusively. The gallery then concentrated on shows of clay and glass, featuring such artists as Richard DeVore, Wayne Higby, Ron Nagle and Peter Voulkos in clay; Marvin Lipofsky and Dale Chihuly in glass. These two areas and a small amount of metalwork were the gallery’s main interests for almost a decade.

In 1979 Yaw met Gerhardt Knodel, Fibers Artist-in-Residence at Cranbrook and a leading figure in fibers today. Through his influence she became fascinated with historic textiles and learned of the importance of textiles to culture and religion. For the next four years the gallery sold Indonesian, Pre-Columbian and Coptic fiberworks.

After this came a break in Yawls gallery career during which she pursued other business interests. When she returned to the gallery in 1984, she again pondered which direction the gallery should go. Yaw was aware of the innovative work in the jewelry field and was particularly inspired by the “Jewelry U.S.A.” show, which she saw in New York City. New attitudes toward metal, fashion and body ornamentation were exposed through this exhibition, and she envisioned great potential in bringing this work into the Midwest. Yaw contacted Bob Ebendorf, William Harper, Mary Lee Hu and Jim Meyer and shared her ideas about this possible direction. With their help and encouragement, she began to concentrate solely on metals and furniture, a field in which she also saw new promise and fresh ideas.

In this past year of exhibitions, the Yaw Gallery has fully illustrated the rich diversity in the field of jewelry. Yaw’s main concern is to represent a variety of distinct approaches to jewelry. The gallery shows the work of Tony Lent and Debra Healy, jewelers who adhere to the traditional use of precious materials. A recent show of William Harper’s Saints and Sinners series exemplified the use of a jewelry format for the creative elaboration of a theme. Jewelry that revolves around fashion, such as David Tisdale’s anodized aluminum bracelets and Douglas Ferguson’s painted mesh neckpieces, are also represented here. Yaw is committed to displaying these areas of jewelry individually, as they are all important and valid aspects of the field. 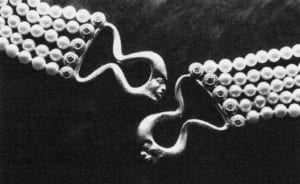 The gallery also features many metalsmiths that are in the forefront of the academic world. Yaw feels that the work of such artists as Jamie Bennett, Bob Ebendorf, Arline Fisch, Gary Griffin, Mary Lee Hu and Helen Shirk is relevant not only as it pertains to metalsmithing today, but as a major influence on the students of these artists.

The gallery space is designed to inform the viewer and enhance the work, which it does beautifully. All of the jewelry is displayed below eye level, with generous space in each case There are no distracting elements around the work, enabling the viewer to read it clearly and directly.

In addition to having a tastefully designed public display area, Yaw also accommodates the client with a private room in which to view particular pieces more intimately and to more comfortably discuss the work with Nancy Yaw or Lillian Zonars, her assistant. The problems of display that confront the gallery owner are many. The Yaw Gallery is constantly upgrading its presentation of work. Yaw’s concern is that in simultaneously mounting such breadth and diversity of talent, each piece must remain distinct. She must always be sensitive to three factors: the client, the artist and the art. Lighting and background color as well as traffic par terns are important variables that any gallery must address; and a metals gallery is confronted with even more. The range in scale presents other difficulties, and security is a constant concern.

Yaw presently carries jewelry primarily; she does not show much holloware, because the space does not yet allow for its proper presentation. She feels that holloware should be displayed with an air of preciousness and should be safeguarded in an enclosed case; an open pedestal tends to diminish the sense of reverence that historically surrounds the presentation of holloware. Yaw is in the process of modifying the existing space to better accommodate this type of work.

The outstanding quality of the Yaw Gallery is the result of Yaw’s diligence and attention to detail. Nothing stands between the viewer and the work. Nothing is shown that is generic or anonymous. Yaw studies the field and is aware of the issues in metalsmithing today. Her rapport with the clientele is warm and genuine and founded on her many years of experience here. The public visits the Yaw Gallery, knowing and expecting the standard of excellence that makes this gallery exclusive.

Myra T. Mimlitsch is a graduate student in the metal department at Cranbrook Acedemy of Art.

All articles by this author
Previous Galleries: The Vo Galerie
Next Galleries: Quadrum Gallery
Social media