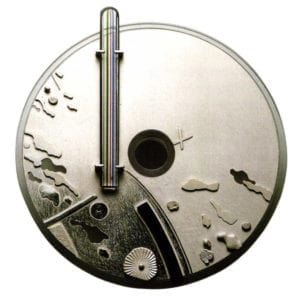 The development of Czech jewelry design is contectualised within a wide spectrum of artworks, objects, sculptures and jewelry in its basic meaning. It is a meeting point of different kinds of arts. 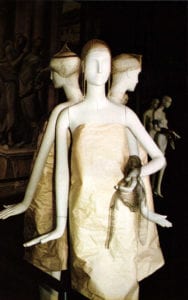 Decorations of head and arms by Blanka Sperkova

Jewelry designers are no longer only gold- and silversmiths. They are deriving from different kinds of art, like painting, sculpturing, glass works, ceramics and even architecture. Besides their education in various fields of art they are designing jewelry as well and many of them are dedicating their workpower to jewelry only now. Thus producing artistic jewelry it has become a melting pot of a great variety of influences of other arts.

This development started already in the sixtieth and seventieth of the twentieth century and has remained up to now. Different styles were created but not in a historical chronology. Individual jewelry artists still create in the various styles, reaching from reflections of structuralism to constructivism, sculptural works, textile creations and glass jewelry to body-art and postmodernism. It is nearly impossible to find out a general style. There is a large scale, depending on former influences of other fields of art, the materials used and the individual thoughts transferred into the designs. 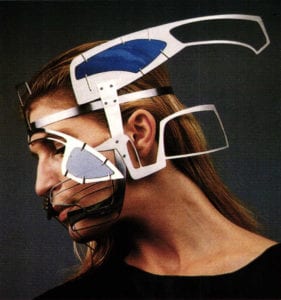 Jewelry for the head by Jiri Jahelka

Constructivism: from dominance to return

Constructivism has been dominating Czech jewelry for the last three decades of the twentieth century and is now one of the strongest influences in contemporary designs. Several artists dedicated their ideas to technological designs, using elements as decorations but even creating “engineering”-jewelry. One of the best known is Anton Cepka, carrying on and developing this art into the 21st century. He may be addressed as one of the doyens of Czech jewelry design. Slovaks will claim him as one of them, but Anton Cepka cannot be separated from the development of Czechoslovakian and later on Czech artistic jewelry. He is now at the end of his sixties and living in Svaty Jur in Slovakia. From technological objects he has turned to a technological decoration of his design, from jewelry objects to wearable products.

Another representative of constructivism is Pavel Opocensky, born in Karlovy Vary in 1954, having worked and resided in the United States in the eighties and now returned to his mother country. He has always been fascinated by technological elements, but he designed the pieces into sculptural appearances and combined them with functionalism. In his contemporary works he is carving away material or layers of material, thus approaching the basic structures. He sticks to geometrical abstraction and minimalism. In his collections of pins we can find compositions produced by the penetration of light through two different elements.

Another representative of technological jewelry Jiri Sibor is belonging to the younger generation. Subtle steel constructions dominate his jewelry objects, still influenced by architecture. Some of the designs are turning into mobile creations, moving in harmony with the body. Jaroslav Kodejs is integrating a great variety of technical elements, especially electronic components, into the basic form of a circle. 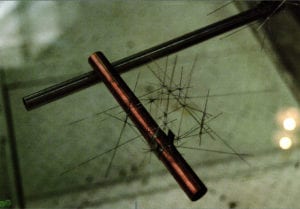 Jewelry should not dominate the wearer, but it should be in harmony with the body. There are a few designers for whom the concept of jewelry is inextricably bound to the human body. It should be an essential part of it. The key figure in the field of body art is Vratislav Karel Nowak. He is professor at the studio of metalwork and jewelry at the Academy of Arts, Architecture and Design in Prague Born during the Second World War he has already influenced generations of designers. We find a lot of avantgard artists among them, like Jiri Jahelka with the “jewelry” for the head. 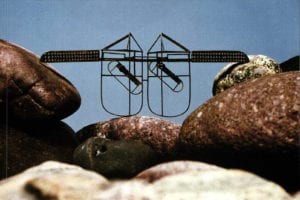 Quite a lot of Czech jewelry designers favour decorative elements often inspired and influenced by glass and textile Bohemian crystal has been admired all over the world ever since more than three hundred years. Thus it inspired generations of designers and producers to develop glass jewelry. Jablonec nad Nisou became the centre of glass jewelry factories.

Some jewelry designers have concentrated on developing technological approaches and exploring new potential in the field of contemporary modern jewelry with crystal elements. Another specifically Czech phenomenon in the world of jewelry is the use of the rich traditions of lacework and folk textile techniques. Most of the designers who create jewelry with textile elements are or have been textile artists before.

Some of them, like Blanka Sperkova, just use the techniques of textile production processes, especially of classical knitting. But her material is metal wire. She is producing three-dimensional objects, jewelry covering a broad variety. She unfold and expresses her specific creative imaginations with extraordinary sensitiveness to the properties. Quite a lot of designers prefer decorative elements in connection with abstract ones and critical expressions, like Vladimir Komnacky. 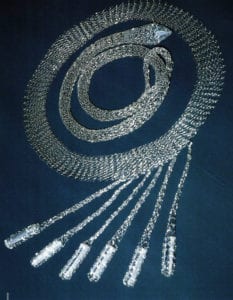 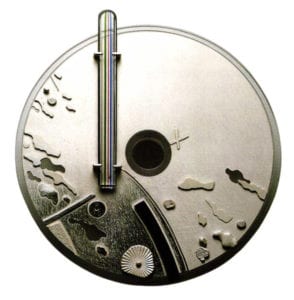 Respecting the various, partly long lasting trends in Czech jewelry quite a lot of large official collections have been established at many important museums, such as the Museum of Decorative Arts in Prague, the Decorative Arts collection at the Moravian Gallery in Brno, the Museum of Glass and Jewelry in Jablonec nad Nisou and the Museum of Eesky Raj in Turnov. The exhibition “Wearing Stones” from ldar-Oberstein was opened in the Turnov Museum (70 kilometers north of Prague) on July 7 as the kick-off for a jewelry symposium. A significant collection of contemporary jewelry was brought together for this symposium.