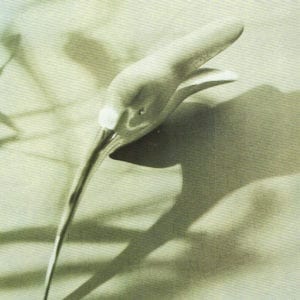 Before moving his studio operation to a ground-floor space in Soho, just last year, Ted Muehling lived and worked in a kunstkammer. His round-the-clock environment teemed with several thousand “found treasures.”

Aside from the deliberate collections of shells, fossils, insects, and stones, there were bits of bones, snake skins, gracefully gnarled tree limbs, draped dried seaweeds, live birds, a Philippe Starck juicer and scads of stools and seats chosen for the pleasure of a particular curve. The unsuspecting visitor was assaulted. Ted Muehling found it serene.

It is neither unusual for artists to surround themselves with the objects they love, nor for them to be inspired by forms found in nature. Ted Muehling , however, makes these inspirational essences the sinequanon of his daily experience. He has placed himself within a grandly scaled collector’s cabinet on the order of those assembled in 17th-century Europe. Like his historically acquisitive predecessors, his goal in owning these myriad wonders is to know them, control them, tame them. For his purposes, Ted Muehling has succeeded. 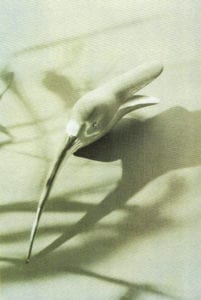 Egret Clip, silver, cast, top and bottom riveted together with silver wire through eyeholes with steel spring inside. Through pressure on end of neck, the beak opens and closes to hold a scarf, 7″ long, 1981
Photo: Don Freeman

There is a singular, minimal sensibility that occupies Ted Muehling, whether applied to jewelry, candlesticks, vessels or walking sticks. It is rooted in nature. Without exception, his variation on a form seeks to isolate and celebrate the essence of a softly sensual, convex curve that continuously stimulates him. His permutations evolve from a preoccupation with the simple grace of the organic ovoid – eggs, pods, acorns, pine cones, almonds, melons, snail shells. Abstracted and sized, articulated, colored, patinaed, punctured and repeated, they never feel repetitious. It is a form that piques universal response, one that resides at the core of our own psychic nature.

What makes his natural abstractions different is, in part, his education as an industrial designer (Pratt Institute , 1975.) In fact, he loathed his only jewelry class, failing to finish a single assignment for it. But he relished the tenets of design and the discipline’s challenge: make it beautiful and make it work well.

Never shackled by the pressure to produce “art” with his jewelry, Muehling’s jewelry production, like all good design, is instigated from a point of purpose. He needed only to answer this: what is the objects function and how can it most beautifully fulfill that function? Two functions needed addressing: that which is the essence of jewelry and the specific workability of an individual jewelry type.

Ted Muehling met the challenge of workability most often by integrating individual physical function with his decorative ovoid form. Nothing seems more ludicrous to him than the little “art composition” with pin back, hanging on a woman’s chest. Instead, the method by which he secures a piece to a woman is designed as an unobtrusive, logical and natural outgrowth of the form of the piece itself. He pursued this idea in his very first work, a ginkgo-shaped hair pick, in which the stem of the leaf was coaxed by hammer to a fine point. 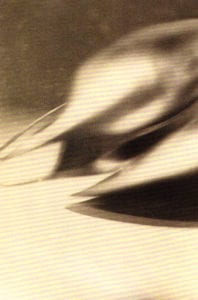 From volume to plane to line – he has explored and rarely deviated from that first essential accomplishment. His elongated drop earrings carry the elegant stretch of bead to the thinness of an earwire. Drop and fastener exist in a single breath. He houses the pin stem for his shell brooches down the length of their interior. The linear mechanism is soldered at one pointed end. It is meant to grab a small bit of fabric, then wrap around the open convex spirals of the form. When the turns are completed, it locks securely and invisibly into the shell’s other tip.

It is in the way Ted Muehling has answered the question of the function of jewelry itself that he breaks from so many others, jewelers and “naturalists” alike. Although he looks to nature for his formal vocabulary he considers it foolhardy to attempt to recreate or capture it. Ted Muehling understands jewelry as a celebration of feminine (not nature’s) beauty. He rejects the notion of status jewelry, but he empowers his wearer by creating jewelry that embodies the culturally idealized esthetic of the “feminine.” He believes that jewelry must be subordinate to the woman; it must never precede or overwhelm. He believes in and seeks to gratify the primal imprint for self-adornment and self-enhancement. His use of stylized primal materials – shells, pods, seeds – taps that recollection. He understands the intangibles of jewelry, that it can produce magical moments, that it has the ability to arouse both the wearer and the viewer. Ted Muehling addresses the emotion of jewelry. And in so doing, he succeeds in making jewelry for a woman’s ego, not his.

This attention to emotion is at the heart of his success – wildly disparate women can and do wear his jewelry. But other factors contribute. The pillowed ellipse that is his formal fingerprint is perfectly suited to the task. It is itself a controlled, essential echo of the feminine. When Ted Muehling seamlessly integrates fastening and form, he simultaneously integrates form and female. That is, Muehling’s jewelry never contradicts, never presents itself in opposition or as an appendage, but appears only as a gracefully elegant extension of the woman. Women feel estheticized, elegant, elongated by the physical and psychological flattery of his forms. 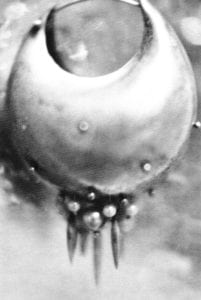 That flattery can take the form of a caress. Many of his designs – the olive branch bracelets, the chip necklaces, the pod earrings – drape the body like a tender embrace. Their ergonomic grace is dependent on their formal reciprocity, with the body, and the responsiveness of their particularized mobility. Simultaneously, his treatment of materials – bronze, silver, plastic, shell – renders them perfectly smooth, matte and mysterious, and sometimes transformed. (In fact, he has no desire to work in gold, in part because it is so immutable). Through their pumiced or chemically induced changes, they must be touched to be fully understood by both the wearer and the admirer. The hand is inevitably drawn to the softness of his curve and the softness of his surface. Muehling’s pieces invite intimacy.

This is an accomplishment for boldly scaled, nonprecious jewelry. In part, it is achieved by the warmth and complexity of his colors and the invitation of his matte surfaces (although he believes the latter is strictly a design decision – reflective surfaces would visually decompose the integrity of his forms). It is also achieved through his interest in movement.

Muehling’s pieces are not only shaped but engineered to emphasize the grace of the feminine form. Like every other element, it is understated, subtle. It comes as a sway or a lilt that parallels the form in motion. A branch pin supports several leaves; a single one dangles. It catches the eye, encouraging a closer look at the piece and at the woman who wears it. A branched necklace will wrap the neck several times; only a few pieces sway with the wearer’s gait. A rice earring flickers like a darting tongue at the edge of a lobe. Its weight is perfectly arrived at; that fleck continues to titillate after her head is stilled. For the viewer, it is a tantalizing provocation.

In the contemporary clamor to make statements, be they through art or jewelry, artists are abandoning the historical intentions of their genres. Ted Muehling has an unusual appreciation for women and for beauty. He concedes it is retrograde. He wouldn’t have it any other way; neither would the thousands of au courant women who respect, respond to and regularly collect his production jewelry.

Vanessa S. Lynn is a writer living in New York who frequently contributes to Metalsmith.