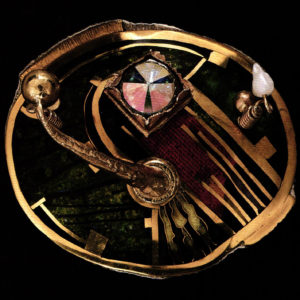 It seems only just, when so many barriers are collapsing, that one of the more prophetic artists of the late 20th century should work in the so-called minor craft of jewelry. By instinct, intelligence and conviction, William Harper has been ahead of the times in three areas that are proving crucial for the 1990s – the swing towards a truly respectful pluriculturalism that recognized the contributions of African, Asian, Central and South American cultures to world art; the crossover enrichment between high and low culture and between art and craft; and finally the fight for an open expression of sexuality as legitimate subject matter for art. 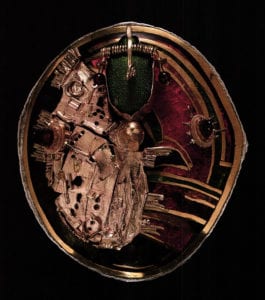 As with most true prophets, however, Harper’s vision for the future travels in a straight line from his past. The traveling retrospective, “William Harper: Artist as Alchemist” (which originated at the Orlando Museum of Art, Orlando, FL, traveled to Limoges, France and to the American Craft Museum and will be shown at the Cummer Gallery of Art, Jacksonville, FL, January 21-February 24, 1991) is remarkable for the consistency of the artist’s vision over a 15-year period of extraordinary rapid formal innovation. Each new series builds on the one before. His most recent works, the series of “self-portraits,” develop themes that have been implicit in his art from the beginning. The difference is one of focus, during the first decade of his career, Harper reinvented the medium of enamel jewelry by questioning its premises. Now he has shifted to questioning the nature of creativity itself. Each of these mythical self-portraits touches on some aspect of the whys and wherefores of creativity – what is it? How does it interact with the world? What are the sacrifices it entails? 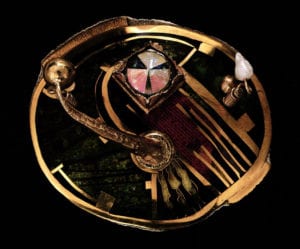 Harper’s Grotesque Self-Portrait of the Artist as a Haruspex, for example, suggests that the artist creates by a process of self-evisceration. (A haruspex was a Roman seer who read the future in entrails.) The complex ridges of a fossil shell spill out from the open chest of Harper’s long, thin figure; its gold mouth grimaces and its jeweled eyes droop heavily as in pain. But the glowing scarab carapace on the Haruspex’s forehead symbolizes the visionary powers of the mind. A brooch, and a very beautiful one at that, the Haruspex also demands recognition as an expressive work of art, one that conveys the dichotomy between the pain of introspection and the ecstasy of revelation that lies at the heart of the creative process.

Harper’s Grotesque Self-Portrait of the Artist as the Goddess Kali (see cover) is densely layered with Hindu mythology. A consort of Shiva, supreme lord of the cosmos, Kali embodies its creative energy. Her name also is the feminine form of the Sanskrit word “kala’ meaning time; hence the Goddess is all-devouring and all-annihilating. In tantric art, Kali is often portrayed as red, the color of primordial energy. She dwells (appropriately for Harper) in the Island of Jewels signified in tantric paintings by a golden circle. But in her destructive phase Kali is black and her tongue hangs out to lick up the world.

Harper has brilliantly condensed these two Kali myths in his circular mask/brooch and incorporated the Shiva lingam symbol as well’ Surrounded by a rim of gold, Kali’s disc face is the incandescent red of bicycle reflector plastic; her black-rimmed eyes are moonstones; her mind’s eye is an opal. But a pearl-tipped lingam of crudely modeled gold emerges from her golden mouth, formed by Harper into a yoni, the triangular symbol for female genitalia. Hence Harper’s Kali brooch personifies both male and female principles of creativity and deconstruction, of life and death. 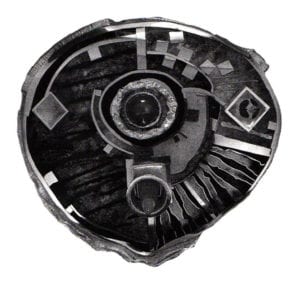 Over the past 15 years, Harper has invented what amounts to an almost entirely new vocabulary for his chosen medium of enamel jewelry. His use of gold as a gestural material, his painterly enamel, his incorporation of found objects and low-cost materials along with precious metals and jewels have been welded by the artist into a unique style that has brought him world-wide recognition. These characteristics are nor arbitrary esthetic choices, however. Beneath each decision on material and form lies the artist’s response to an inner challenge.

Among the first questions Harper asked himself when he started making jewelry in 1974 were, “What can I do to legitimize the concept of preciousness without making something effete?” “How can I combine preciousness and shock value?” He quickly realized, with insights derived in part from African assemblage art, that the barriers between materials suitable for jewelry and junk destined for the trash can were purely conventional and had little to do with their intrinsic textural and visual qualities. But along with this realization came another, namely, that defying this conventional barrier could heighten the impact, the “shock value,” of his jewelry. Beginning with his Fetish pins of 1976, Harper has combined found objects – broken bits of bone, hair, shell, the burnt out ends of aluminum fluorescent tubes – with precious metals and jewels. 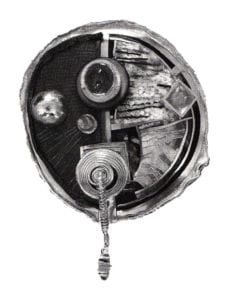 This exhibition contains numerous examples of Harper’s mixing of high and low. In Grotesque Self-Portrait of the Artist with Nose Envy, Harper pairs a plastic 50s cufflink and bicycle reflector plastic with a pearl and enamel set in gold. In Grotesque Self-Portrait of the Artist as an Icon, a tiny steel gear serves as the radiating center of a golden sunburst.

Another of Harper’s provocative ideas about jewelry stems from a pun. The German word for jewelry is “schmuck,” (In 1982, Harper exhibited at the Schmuckmuseum in Pforzheim, West Germany.) But the Yiddish slang for a man’s genitals (his “jewels”) is also “schmuck.” It occurred to the artist that there was a large measure of psychic truth in this verbal identification of preciousness with potency. From the 1970s onward, the phallic imagery has been an intrinsic part of Harper’s iconography; many of his works from the 1970s have the requisite three-fold appendages, most notable the pagan Babies and the Boogie Babies. More recently he has combined symbols for both male and female genitals as in Grotesque Self-Portrait of the Artist as the Goddess Kali.

Harper’s use of phallic and vaginal symbols is only part of his investigation of what makes a small object potent. The idea of spiritual power has virtually vanished from Western jewelry, although there are echoes of it in the folklore of gemstones. But it is still very much present in Africa, where people wear amulets and charms for protection from evil and for the working of magic. Harper started collecting African art as early as 1967. He was particularly impressed by Congolese fetish figures – wood sculptures bristling with nails, razor blades and other sharp objects, pounded in as part of community rituals to bind contracts and transfer evil influences to the figure. It struck Harper forcibly that the intrinsic linkage of good and evil in a single icon had a good deal to do with the icon’s aura of power. He decided that the combination of extremes and dichotomies would be the structural principle of his art. Again, the assemblage art of Africa served as a model, demonstrating how a rich series of conceptual opposites could be brought together in one powerful iconic piece.

Harper was also deeply impressed by ancient American art. Handling pre-Columbian gold, he learned that “gold had a quality that was so noble, you could treat it disrespectfully and still have it emerge as a wonderful material.” You could crumple it and bend it like paper without diminishing its splendor. While an almost casual use of unpolished, undesigned gold has always been characteristic of Harper’s jewelry, in his recent work he takes the idea even further as in Grotesque Self-Portrait of the Artist as a Pagan Baby, where he slathers an area with gold Lichtenstein-like strokes.

The fascinating thing about Harper’s work is how persuasively these different insights and elements merge in his art. It is not a question of applying art to jewelry but of discovering a new form of expression through penetrating analysis of the nature of a medium. Although rich and diverse in appearance, his pieces are extremely efficient in that their synthesis of material, technology and symbolism directly enhance the time honored function of jewelry – to identify and to enhance the life, power and status of the wearer. These are contemporary works of art that rake life, creativity and sexuality seriously but with verve, humor and brilliance. They force the same standard of the wearer.

Jane Addams Allen is a founding editor of The New Art Examiner and a two-time recipient of the Manufacturers Hanover/Art World award for distinguished art criticism.