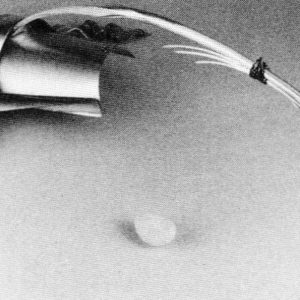 M. Avigail Upin’s carefully constructed work displays a cool and impeccable cleanness of style, with silver the dominant material. Her earlier work—jewelry and containers—characterized by literalness and elegant miniaturization of everyday objects, was drawn from the artist’s memories. An interesting duality is evident in the earlier pieces.

Having admired the work of Fernand Léger, who rendered the figure in the manner of machines, Upin developed a precise formalism for her work related to Léger’s during her studies at San Diego State University. The other side of this duality is a traditional feminine sensibility, shown in her use of filigree and textile techniques with wire to produce delicate effects. The choice of subject matter and the small scale of the work make it very personal and somewhat sentimental.

Two clear examples of this duality are Collar and Fragments II. The former is a neckpiece of lacelike, crocheted, aqua-colored wire, each end of which is capped by a silver cuff of a blouse. Tiny details such as buttons appear to be sewn in place. In contrast are the stark and formal checkered patterns between the cuffs and the basic, rigid, geometric shapes which make up the cuffs. Fragments II is a small container in the form of a garment. Intricately woven wire fasteners have a very different connotation than the harsh angles and planes that make up the folds of the garment’s material. <div class="adframe"> <div class="adframe300x250"> <div class="adframe300x250label"> <i class="fa fa-gem icon"></i> Ganoksin is sponsored by</div> <center> <div id='div-gpt-ad-1479837244275-0' class="ad-item" style='height:250px;'> <script> googletag.cmd.push(function () { googletag.defineSlot('/87578358/ganoksin-paragraph-1', [ 300, 250 ], 'div-gpt-ad-1479837244275-0').setTargeting("topicid", ['behind-the-design', 'jewelry-design', 'business-and-marketing', 'exhibition']).addService(googletag.pubads()); googletag.pubads().setCentering(true); googletag.pubads().enableSingleRequest(); googletag.enableServices(); googletag.display('div-gpt-ad-1479837244275-0'); }); </script> </div> </center> </div> </div> 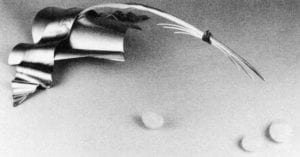 There is evidence of an evolution of style. The most recent work shows a transition toward greater abstraction. A bowl form, entitled 934 7th Avenue, whose only literal elements are a pair of jacks and the numbers 934 engraved on three steps inside the bowl, produces a vague effect, tied perhaps too literally to a memory which is obscure to the viewer. In Wisconsin Landscape, another container, the images of a two-lane highway and silos are distorted, but, as in earlier work, Upin relies on them to give a literal picture of a place more than to evoke its atmosphere.

In the two most abstract pieces Fishin’ 2’s & 3’s and Torn 2’s & 3’s forms only suggest objects. Sentiments are strongly conveyed through ambiguity. They are also purely sculpture, abandoning functional formats. All characteristics of the earlier pieces are present, but they have taken on a more subtle role. What stands out is the suggestion of emotional qualities, such as yearning or tension. This direction toward greater abstraction is intriguing.

All articles by this author
Previous The Goldsmith & The Grape Exhibition
Next German Jewelry: Freedom Through Precision
Social media