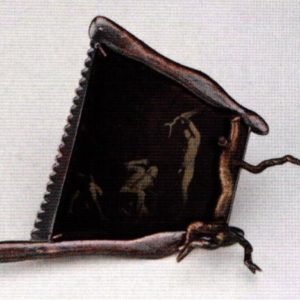 Gallery 21, an all-white exhibition space in Spanish Village, San Diego, California, became home to the enamel exhibition, RADIANCE from October 3-25,2009. This square room, with a bank of windows on one wall, was transformed by Studio 5’s in-house designer, carpenter, enamellist, and teacher, Steve Artz. The addition of huge panels of grey and black MDF board, acrylic and MDF formed structures housed the incredible enamel art of 45 people from throughout the United States.

The juror for RADIANCE, Linda Darty, had her work cut out for her as she studied the entries, over and over, to finally arrive at a cohesive and outstanding show that exemplifies the up-and-coming and the best of contemporary enameling entries for this show. 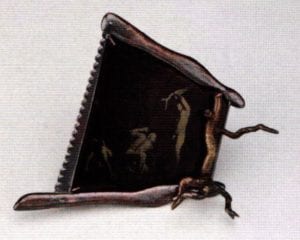 The exhibition amplified the diversity of the metal forms that can carry enameling and the myriad of methods that can be used to apply the glass to the metal. As people moved throughout the gallery they were gently invited to peruse small intimate objects of adornment that quietly reminded them that traditional techniques continue to be alive and beautiful, then, sometimes immediately, be confronted with a “jump-out-at-you” enameled piece that loudly and forcefully demanded their attention and pushed its way into the contemporary enamel world. <div class="adframe"> <div class="adframe300x250"> <div class="adframe300x250label"> <i class="fa fa-gem icon"></i> Ganoksin is sponsored by</div> <center> <div id='div-gpt-ad-1479837244275-0' class="ad-item" style='height:250px;'> <script> googletag.cmd.push(function () { googletag.defineSlot('/87578358/ganoksin-paragraph-1', [ 300, 250 ], 'div-gpt-ad-1479837244275-0').setTargeting("topicid", ['cloisonne-enamel', 'enameling', 'jewelry-making', 'exhibition', 'jewelry-design', 'features']).addService(googletag.pubads()); googletag.pubads().setCentering(true); googletag.pubads().enableSingleRequest(); googletag.enableServices(); googletag.display('div-gpt-ad-1479837244275-0'); }); </script> </div> </center> </div> </div>

Among those attention-getting enamels was Cynthia Miller’s confident nine-panel “Gold and Jewels Rising from the Mist” which also captured the Enamellist Society Award. Hanging on a white manikin, by many frighteningly wispy “threads,” the heavy and ball-like formed copper hanging “Dendritis Chromium” by Damia Smith won the Thompson Enamel Certificate Award. 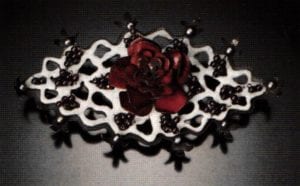 Nodding to the beauty of traditional cloisonné, lean Tudor’s 16 three inch copper circles held images of a trip to Switzerland. Each small disc captured the beauty and possibilities of this technique as it tells the story of one person’s remembrance, in enamel, of a particular time and place. 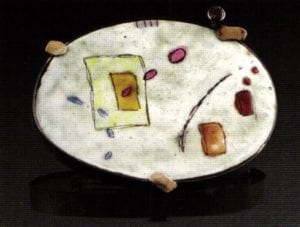 Looking back, it seems amazing that our small, 26-member, Studio 5 enamellist group, with dedication, hard work, and Steve Artz was able to achieve a month-long exhibition in San Diego’s Balboa Park. Would we do it again? Ask us in a year, after we catch our breath and find out that we really did survive. 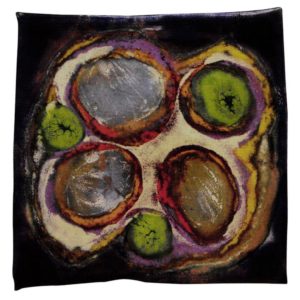 Volume 28, Number 5, December, 2009
Glass on Metal is the only publication dedicated to enameling and related arts. Technical information, book reviews, how-to articles and insight on contemporary enamelers highlight each issue.
Category:
About the author

All articles by this author
Previous The Enamelware of Pat Peat O’Neil
Next Terry Gay Puckett: Retrospective Exhibition
Social media