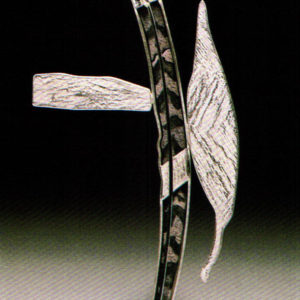 The Enamelwork of Jamie Bennett

It is a rare and most welcome event when a technical innovation is accompanied by an esthetic revelation. This is the core with Jamie Bennett’s new work, a series of brooches, whose electroformed armature is covered with what seems like a free-floating plane of enamel. Not only has Bennett achieved a separation of form from surface, an enamel without a visible metal support, but he has in the process redefine the role of a colorist in jewelry. 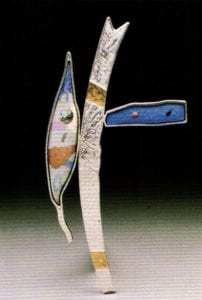 In 1988, Jamie Bennett unveiled a series of electroformed copper and enamel brooches that appeared to be a radical departure from his previous work. Unlike the cool, abstract restraint he employed earlier, these new pieces seemed to pulse with an internal force, from a visceral, organic, evocative center. What this work did share with its predecessors were signs of the struggle to tap a heretofore unexpressed language from the ancient medium of enamel jewelry. To unleash that potential, Bennett had long sought ways to break the linear rigidity and technical tyranny that have bound the medium. 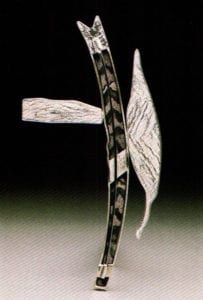 The new Priori series crystalizes and fulfills these long-standing ambitions. Clearly, a major achievement for Bennett is his release from the self-imposed constraints of the picture plane. The fact that these electroformed units are conceived and completed entirely in the round gives him the freedom to embrace not just painting but jewelry, as well. It is a richness he has long denied himself. In doing so – in making jewelry that references itself, that invokes the vital force of nature, that possesses a self-generated physicality – Bennett celebrates the sublime aspect of enamel.

A fascination with the enamel reliquaries and the tiled nave processions of the Byzantine period underlies Bennett’s win passions: a staunch commitment to the emotive intimacy of an object and a steadfast preference for the cool, self-referentialism of formalist painting. The vast conceptual space between the two led Bennett to experiment with painting and sculpture in order to reconcile their differences. Mysterious, shrinelike wall constructions and vibrantly sensual works on paper form an important part of his development when seen in this light. 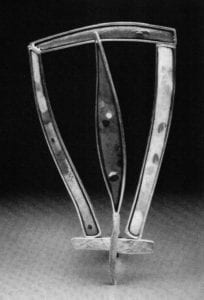 In retrospect, Bennett needed to explode the potential of each medium before he could reassemble the most vivid parts into the potent new brooches. The gestural cloisonné line, derived from his investigations on paper, broke the static design of earlier efforts such as Black series, 1981-82. Shortly after this attack on the picture plane, Bennett began the Coloratura series, 1985, attempting to introduce an emotive content to his reliefs by breaking the pictorial surface into a disjunctive triad. With the Deerrun, 1986 – 87, Calypsos, 1987 and Aiuola (garden) series, 1988, additional elements seemed to point to Priori, 1989-90: nature abounded; the surfaces gained force with rich texture. Still, these works held contradictions, as Bennett worked the backs with an animated, deeply cut gesture while containing the energy through the imposition of a frame. 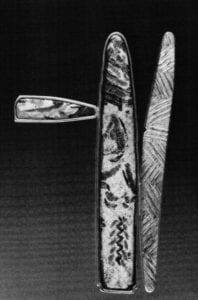 With the realization that all he had been seeking might find its resolution in a clearly three-dimensional format, Bennett spent over a year in technical experimentation on Priori. He refers ruefully to the boxes of mistakes that still litter his studio – pieces too thin, too leaden, too chunky, too silent. But with a combination of hard and soft waxes, he learned to carve and model in pursuit of his envisioned form. He arrived initially at an irregular, five-inch cylinder, whose pocked, misshapen surface suggested an internal eruption. Equally organic, vestigial or finlike protuberances often emerged perpendicularly to the main barrel-form, serving further to emphasize the sense of an inner force. The electroformed tubes were variously closed with pinched finials or floriated ends. 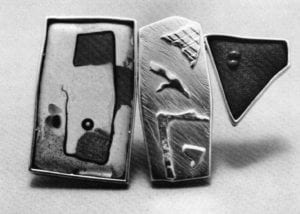 Further additions/alterations to the bodies occurred with an array of small, gold bands or shields, occasionally applied to or wrapped over small segments of the cylinder skin. And, in the most astonishing departure of all, slim, gold bits were fashioned into irregular, primitive charms, perhaps enameled, maybe pierced or gouged – left to dangle and resound from the larger column.

With the Priori series, Bennett has succeeded in building a holistic form, whose expressive plasticity appears inextricable from the pigment and coloration of its surface. In fact, surface is perceived as resulting from the growth of the internal structure. With the electroformed skin mottled under carved layers of stippled color, Bennett has performed the ultimate painterly illusion. The distinctive colors seem to glow from within. One feels these primal forms exist by virtue of their color, that their very essence is their color. With the variety of texture achieved, both actual and suggested, they beseech the viewer to touch and to hold, to respond to their life-affirming presence.

Vanessa Lynn is a writer living in New York, who frequently contributes to Metalsmith.