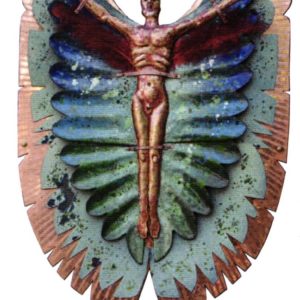 The Enamelware of Tibor Kopocs

In 1987, some drawings I had made were exhibited (about 30 etchings) in Szolnok, Hungary. A friend of mine, László Bokros, a painter, organized and directed the exhibition and when he saw my etchings, he shouted, “You have to enamel.” I didn’t know what he meant. I hadn’t heard of enameling until then and to tell the truth I wasn’t interested in it because I knew nothing about it. 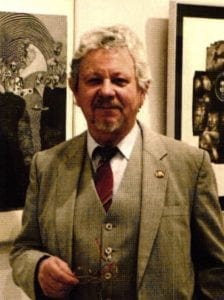 In the beginning after learning how to prepare iron and copper plates for enameling, I worked with painting enamels in order to fulfill my ambitions as a painter – and I achieved some good results. At a later time, our artistic leader Andre Turi, who was the director of the International Enamel Studio at that time, showed me how I could achieve graphic effects. We would fire a little thicker white base of enamel, then abraid the  surface, then draw on this surface with hard black-lead pencil. 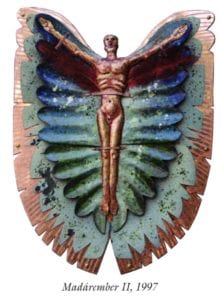 The drawing was made more three-dimensional by using cross hatching, and finally we were very careful not to overfire the work. I could envision a new potential – enamel graphics. In order to emphasize the drawing effect, I later added some color, mainly gold and the result was fascinating. Eventually I substituted the drawing graphic effect with cloisonné – drawing with fine thin wire, then filled up with ground jewelry enamel juxtaposed next to the opaque, which was beautifully shining after firing.

After acquiring some knowledge and experience at the International Enamel Workshop in Kecskemet, Hungary I continued my work at home. I already had a furnace, enamels and tools. 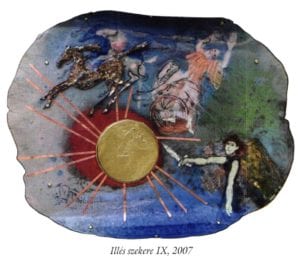 When I was invited to Kecskemet to take part in the summer workshop of the International Enamel Center, it was the miracle itself that I saw and experienced there over a six week period. It was love at first sight. I fell in love with the world of artistic expression and possibility within this wonderful material. I was spellbound by my first attempts and became further enraptured by this marvelous medium. After that summer I continued to go back to Kecskemet every year. The more I learned, the more I realized I may never learn it all, but with perseverance and continued experiments I have seen progress. Realizing good results helps to encourage you to continue with more experiments. I continue to discover more and more wonders. As my understanding of the materials and process grew (chemical composition, relation between enamel and metals, etc.) a new creative world opened up for me with endless possibilities.

In 1991, the owner of a private school invited me to teach art at his school in Gúta (Kolárovo, Slovakia) and later asked me to start the development of an enameling program. It was a new challenge in my life, however, I was more than happy to do it. Besides preparing the school studio with the necessary tools and equipment, the program had to be approved by the Slovakian Ministry of Education. This would be the first program of its kind in Slovakia. Enameling was a peculiarity and I had to present some of my own enamel works to the Ministry in order to show that our prospective students would be able to learn this delicate work. There were also safety concerns related to firing and materials used in the process. For some in the Ministry it was their first time to see enamel work and they were amazed at the process and the potential of a program for enameling at the school. 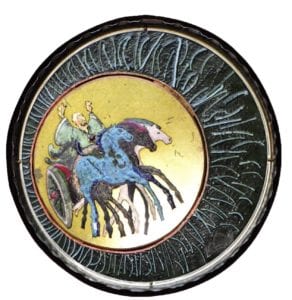 After the school received the necessary permission to start the program I began work on developing the curriculum for a three year program. In the next school year enameling was offered on the level of applied arts. We started with three talented students, later we had six, then eight and then ten students in this program. The students had such great interest in the enameling program that after ten years, one of my students took my place (she had acquired the necessary pedagogical qualifications to teach the course). Currently well known experts in their respective fields teach and educate at this private school with modern equipment and new faculties, which have been introduced to the school such as pargeting (ornamental plaster and mortar installations) artistic blacksmithing/ironwork and stained glass.

After leaving the private school in Gúita, I went on working as a freelance artist. I rented a room for a studio in Komárom (Komárom, Slovakia). I still maintained a studio in my family house as well. In Slovakia I have organized courses for talented young people from the area. I still execute my own projects for enameling in Kecskemet at the International Enamel Workshops in summers. I am able to spend most of my time on graphic arts and painting, so my creative work is on three tracks, drawing, painting and enameling all at the same time. 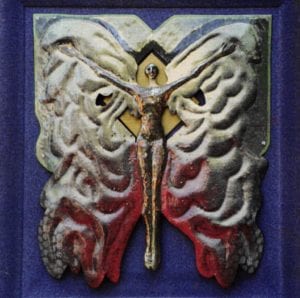 The idea occurred to me that I should publish an art periodical. In time, Atelier Art Journal was created. My colleagues have charged me with the job of chief editor, which also involves distribution and other tasks. Atelier has been published since 1998 (12 years) in Hungarian language. Its goal is to present and follow events of contemporary fine art (focusing on Hungarian contemporary fine art). 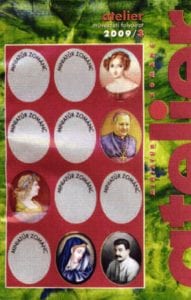 Besides editing I still draw, paint and enamel when time permits. I usually go to Kecskemet to participate in the summer symposiums. I am a member of the Hungarian Society of Enamelists. The Society organizes exhibitions in Hungary and abroad. I am also a member of the association of the Slovak Artists and a member of the Society of Hungarian Artists living in Slovakia. My works (drawing, paintings and enamel paintings) have been exhibited many times in Slovakia and abroad as well. Some of my works are owned by public and private collections. I live and work in Komárom. 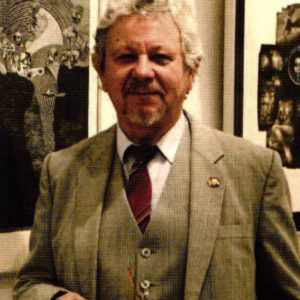