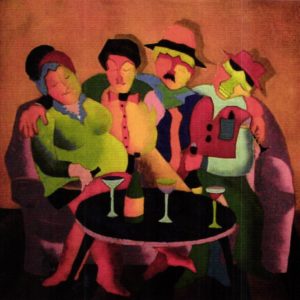 Artists Joel and Pamela Sansone are maestros of glass. Walking into the Sansone’s Studio is like stumbling upon a surprise, a vibrant gem, tucked in an obscure corner next to a dance studio and across the street from St. Mark’s- in-the-Valley Episcopal Church.

“I was destined to be an artist,” Joel says. “I was born feet-first, left handed and used to try to eat spaghetti with a spoon.”

He remembers back in eighth grade daydreaming in history class. When he had to take a test, he would hurry through the questions so he could flip the test over to draw on the back.

“My test would always come back with a big fat F on the front, and a big A on the back,” he says.

The studio’s walls are hung with immense works of art, copper quilts of patterned squares. Heavy abstract works of mosaic faces are put together like neon enamel rainbow puzzles, made up of fractals of colors, one on top of another.

Gleams of copper are caught in the beam of spotlights, shining on annealed metal bowls with their reliefs of ancient symbols, giving the effect of strolling through a modern museum.

The Medium and Works

The Sansones are artists in vitreous (glass) enamel, an ancient technique dating back to the sixth century B.C.E., where colored pulverized glass particles are applied to metal, then fired in a very hot kiln (1,500 degrees Fahrenheit). Each layer of color requires multiple firings. 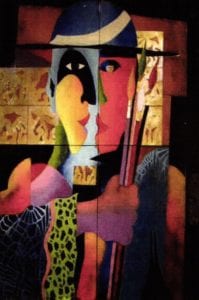 The Sansones’ hand-forged copper bowls and coasters are usable works of art. Some are vivid with orange and red, and some are subdued pastel with etched petroglyphs dancing around a bowl’s edge in its natural copper tone.

To create this effect, the worked bowl is dusted with powdered colored glass, thicker in some spots while the more sparsely-covered areas will show the metal’s natural turquoise patina when fired. Pamela creates most of the bowls, plates, coasters, gifts and accessories at the studio, and Joel creates the larger wall pieces.

Joel’s works show a Picasso influence, using the medium of enamel fused on glass. He also has heavenly works. In the Nojoqui street studio, a work called “Stellar Scape” measures 8-feet in diameter and is astronomical in its proportions and indications. Each of its thousands of stars was meticulously applied one tiny dot of powdered glass at a time.

“It was a technical nightmare to create,” Joel says. “(But) I’ve always loved the subject of astronomy and astronomical images.” 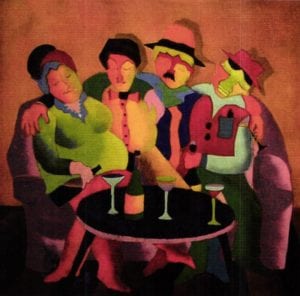 To work on it, he perched on a plank balanced between two sawhorses so he could reach the middle of the piece. He had to stop, dismount the scaffold and climb a 10-foot ladder to see the piece as he worked. It took more than 500 firings over a course of 16 months to complete.

For the past several years, Joel has begun to focus on creating textured copper wall hangings, a new art form inspired by decorating salvage pieces for his Los Olivos studio. When the contractor next door left some sections of large beams, Joel cut them to make a table.

To decorate it, he took some copper sheet scraps and went around town pounding patterns into the pliable metal on different raised-lettered signs, then nailed them onto the wood, covering the table completely in the beaten copper reliefs. An idea was born. 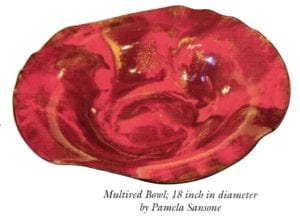 That created the natural variation of colors copper turns when heated. After creating a series of designs, colors and sizes, the pieces become his paint pallet, so to speak, as he weaves and tacks the copper mosaics together into a patchwork of colors and textures.

Some are triptychs, meaning three complimentary pieces displayed in a group. Hints of red and green applied to the copper reflect variations of color and gold when touched by light.

Joel says that having a studio in Los Olivos has exposed their art to the world. “We have customers in China, Russia, Japan, Korea, Costa Rica, Switzerland, France, Italy … That many people have found their way to Los Olivos,” says Joel. He says their work can be found in 23 different countries and 47 states.

“Joel does extraordinary work,” says Judith Hale, who owns her own art gallery in Los Olivos. “He adds a dimension to the art that is available here in Los Olivos.” “His bowls and other enamel works are done with extremely rich, deep, beautiful, vibrant colors, often a little abstracted. He has a great eye for composition and color.” 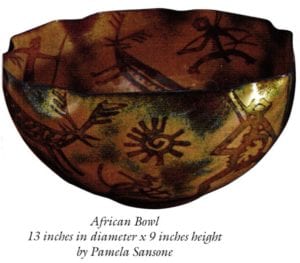 Joel’s work was displayed at Hale’s gallery before the Sansones opened their own studio 14 years ago. Pamela says her latest focus has been on a series of African-themed, hand-worked copper coasters and bowls.

Pamela says her latest focus has been on a series of African-themed, hand-worked copper coasters and bowls. She chose five big animals of Africa: the giraffe, elephant, lion, wildebeest and rhino to feature in her work that uses specialized techniques to etch a silhouette of the animals in the fired enamel with a paper pencil tool. 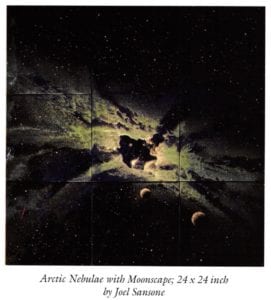 “Then, I come back and cover the whole thing in gold transparent glass to seal in the image, and put on several other clear colors on the interior and exterior, with a final coat of light transparent glass,” she says.
Her work has been displayed at the “Ladies First” art show which is an annual tribute to all female artists in Los Olivos.

Her work has been displayed at the “Ladies First” art show which is an annual tribute to all female artists in Los Olivos.