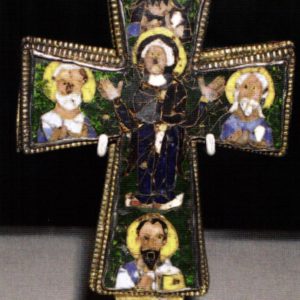 The innovative Medieval Galleries, occupying a complete wing of the Victoria & Albert Museum in London, have now been open for several months. There was extensive initial press coverage and a great surge of visitors: but with such spacious galleries everyone could circulate comfortably, and the manner of display allowed full examination of every object.

Now, during the hot summer months there are fewer visitors, and an opportunity to gain a wider overview of this tremendous collection. Several visits prove that there is always much more to be discovered and assimilated every time one returns.

Byzantine Pendant Cross The double sided gold pendant, in cruciform shape was made to contain a devotional relic. The cloisonné enamelwork is in the minute style of Byzantine craftsmanship. Attributed to an Italian workshop of 800 to 900 AD.

All the selected items on display have been restored, refurbished or cleaned, to bring them as close as possible to their original splendor. The showcases that feature enameled pieces are flanked by those showing a great span of works of art and craft in different materials: from huge painted altar pieces and stained glass windows to textiles, gilded chalices, bowls, shields and other artifacts. With this juxtaposition, the strong, cohesive influences that governed all the European arts over several centuries become strongly emphasized. 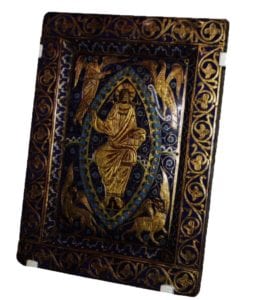 The heavy Gospel cover, with applied copper gilt champlevé enamel plaques was made in Limoges [France] in about 1200 AD.

A few rare pieces in gold cloisonné work in the Byzantine manner are in the collection, but the great majority of the enameled pieces are in the champleve technique applied to copper gilt bases. This robust and durable method of enameling came to the fore in Western Europe in the twelfth century and its application to liturgical objects is shown on a variety of objects. These range from small shrines for saintly relics, to candle- sticks and boxes to a great tabernacle [to hold consecrated wine, etc.] in the form of a miniature domed church.

Champlevé ornamentation was also important for heraldic objects, such as dishes and boxes as well as shields for horse harnesses. The use of clear enamels over designs in chased silver or foil, in the manner of basse taille, was developed by goldsmiths during the first half of the fourteenth century, and such ornamentation is shown here on small roundels inset into devotional objects. 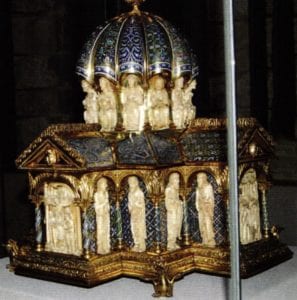 The great domed tabernacle [container for consecrated items] has figures in carved walrus ivory [later replacements]. The copper gilt panels and pillars of the elaborate architectural form are with champlevé work, the pattern varied for almost every section. From a 12th century workshop of Cologne [Germany].

The difficult  technique of painting with enamels is also represented. That includes a few items with insets made in the earliest enamel painting style, with silhouetted figural images produced with graduated layers of white enamel over a translucent ground. The far more developed enamel painting technique became the great specialty of the workshops established in the French city of Limoges from the last quarter of the fifteenth century and which flourished especially during the sixteenth. These early Limoges painted enamels depict religious images under medieval principles and color was paramount. Only a few representative works are shown from the post 1530 period, when the grisaille method was perfected by the leading masters of Limoges, who followed Renaissance models for greater naturalism. 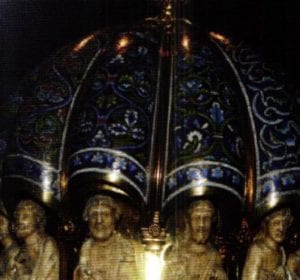 Details of the domed tabernacle

The works on exhibition highlight how the early enamellers, as all the craftspeople of their era, had to follow a precise manner of showing religious narrative subjects, stipulated by the Church dignitaries who commissioned such altar pieces and triptychs. For heraldic ornamentation too the enamellers had to match the symbols and stipulated color ranges required for royal and civic insignia and regalia. The high cost of making such work arose from the value of the metal, the difficulty in obtaining the enamels, the long processes involved in preparing all the 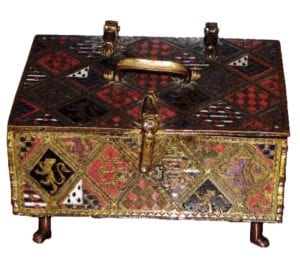 Known as The Valence Casket, the copper gilt container is embellished with repeating patterns of shields and. heraldic symbols in champlevé enamelwork. Attributed to a workshop of Limoges [France] from about 1305-12.

materials and the running of the charcoal-fuelled furnaces. With the use of such enameling techniques it was best to limit the maximum size of panels. Therefore small plaques or roundels were made as insets for larger objects, or designed to be applied in series to cover larger surfaces. 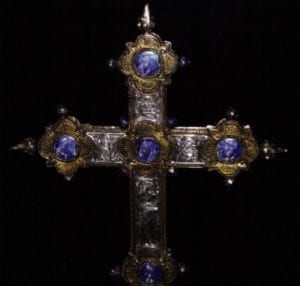 The upper part of this large Crucifix [known as the Reichenau Crozier] has inset roundels in an early method of pointing with enamel, applying thin layers of white enamel over a translucent ground. It was commissioned in 1351 for the Abbey Church of Reichenau near Lake Constance, Germany.

Despite this necessarily restricted format, the enameled articles have great distinction, and the finest pieces have ranked among the most valuable and venerated objects of any period. The color qualities and durability of enamelwork had the additional benefit that glass, in all its forms, was seen as a rare and mysterious material in this era.

There are excellent wall placards with information on the broader historical context of the art works, but individual labels for each showcased piece tend to be very succinct. This helps to encourage one to look with a fresh eye, and analytically, at the actual objects and to follow up in the literature. Visitors can also look up information on the V & A website. It is instructive as well as a pleasure to see, also, the short video on permanent run, showing key moments of creating champlevé enamels in the medieval manner: for this it is Phil Barnes who is engraving and enameling a replica of a twelfth century panel. 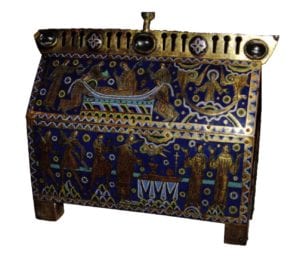 A reliquary casket, with applied copper gilt panels and champlevé enamelwork, showing scenes from the life of St. Thomas Becket. France, about 1180.