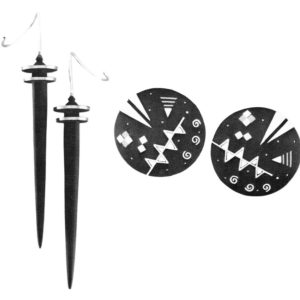 This is the second in a series of articles about production jewelers. This installment concentrates on design versus saleability, the incorporation of industrial techniques in a line of jewelry and preparation for running a small business. 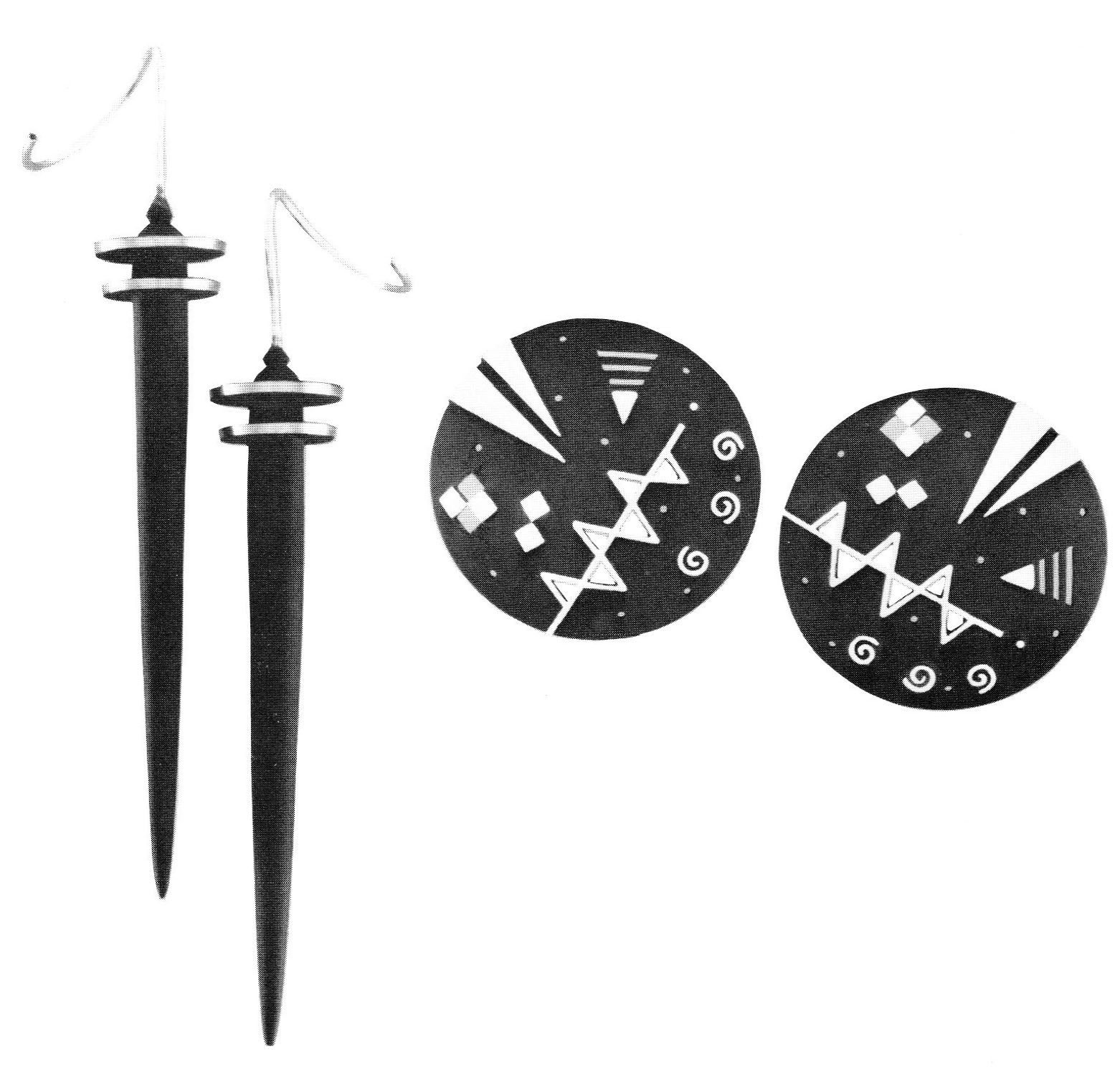 Most production jewelers will agree that financial compensation has been one of their greatest motives. Betsy Fuller, a jeweler in Hobe Sound, Florida, goes so far as to tell how, at the age of seven, she sold glitter paper rings on the sidewalk for two cents apiece, concluding that her present vocation “is destiny perhaps.” Many will agree as well, however, on a less obvious incentive: The esthetics that evolve from the repetition of a single motif are often reward enough in themselves. Explains Jan Yager, a Philadelphia artist-goldsmith, “I have always worked in a series to completely run an idea through.” And while she points out that repetition of anything from three to 50 times can complete an idea, the kind of exploration implicit in production opens avenues closed to the jeweler who limits his work to one-of-a-kind pieces.

Pam Levine, a New York jeweler, concurs. “Production jewelry is not always chosen for the sole reason of making money; it may also be viewed as a creative avenue.” While production jewelry is often associated with the tedium of monotonous repetition, its flip, and less understood, side is that serial design implies a sense of continuity. Pieces that are part of a production line can suggest an evolution, a dimension lacking in one-of-a-kind pieces.

Production jewelry also, by nature, tends to acknowledge industrial techniques. And herein lies another dimension which distinguishes it: Although industrial techniques may first be adopted for their cost and convenience in making creative impulse material, the reverse often holds true as well. That is, industrial techniques often wind up as the very inspiration themselves. While some jewelers are reluctant to actually find these techniques “inspiring”—Sean Gilson of New York finds technique “Just another tool” and explains that he designs with virtually no regard to the manner of execution—most do acknowledge instances in which techniques have motivated design. Yager points to the embossing processes she employs “which I first saw being used by a company which made embossing dies for Valentine cards. And having lived in Providence, Rhode Island, the world capital of costume jewelry, she adds, “I couldn’t help being influenced.” And Cathleen Bunt, another New York jeweler, admits that it was the anodized aluminum that inspired her pieces incorporating aluminum, ivory and stones. An industrial process, concludes Levine “can be stimulating if one is creative enough to push it beyond its limits.” In her case, black chrome plating and chemical etching permitted her to develop detailed pattern pieces that could not otherwise have been produced in quantity.

What Levine is also pointing out is that the production jeweler can look to the pragmatic side of his work for creative input. “while my first line,” she explains “was a result of instinctual design, I realized that my work must be practically produced—cost-conscious—and still maintain consistent ideas. The folded shapes that evolved solved production problems while providing a creative base.” The lesson, though it may be obvious, bears repeating: Industrial materials and processes are not simply the means with which to execute design but are creative resources in themselves.

Another point of agreement among most of these artists is in the kind of education they found available. Yager establishes that “a broad background in art history and various art media” provided a wealth of resources. Others concur that past education most valuable to them now are the art courses which exposed them to media and expressions they might not otherwise have encountered. Second in importance are the technical skills learned in workshops. Nevertheless, all agree that their backgrounds did not sufficiently expose them to the practical business skills that are as vital to their professional success as creativity at the bench. And, as might be suspected, the illiteracy that ensued fostered one of the most difficult problems that greets most of these jewelers: while maintaining cash flow maybe elusive enough in itself, it is often even more difficult just to keep track of where the cash is. Simple bookkeeping and paperwork can consume much of the time that they had hoped to spend at the bench. Most of these jewelers will agree with Gilson who recalls that it was “experience and hunger” that best provided him with business training.

The exceptions seem to be in the cases where jewelers apprenticed or worked for another studio or gallery before going into business for themselves. For example, Levine’s tenure in the commissions and repair department at Aaron Faber Gallery and later position as a product developer at Cartier both taught her how to seek out contractors through industry trade publications. Or Bunt, who licked up her “speed and precision” by working for another craftsman. Or Gilson who apprenticed as a benchworker for a year. The point seems to be that while most jewelers who choose to do production work do so precisely because it allows them to work independently, apprenticing first or working in a gallery can offer a fast course in business know-how that might otherwise take years to pick up.

Still, it is only fair to point out that not many production jewelers actually went to school below the graduate level with that career in mind. Had they done so, they might have tailored their curriculums to include more business courses. Fuller, for example, had entertained notions of becoming a psychiatrist or oceanographer. While her work is certainly a rich reflection of her fascination with marine forms, one would not expect that interest to propel her toward business courses. Likewise, Gilson had considered becoming an aeronautical engineer. Like the art courses these jewelers found so valuable, these interests are what has provided the imaginative scope and power of their work. They lay the foundation for a personal and esthetic vocabulary later translated in precious and nonprecious materials. And though they could be what discouraged these jewelers from business courses, the less tangible information they did provide is surely as valuable.

Jewelers who did study metalsmithing at a graduate level and in subsequent workshops also found, unfortunately, that the practical side of the profession was rarely addressed. Most agree with Yager who says, “Schools could and should offer more exposure to business practices and philosophies. Artists, like lawyers and doctors, are ready for some undiluted advice on survival and flourishing.” Bunt is more specific, advocating that jewelry departments in art schools offer courses in how to deal with sales reps, billing, crafts fairs and photography.

As much a problem as cash flow and bookkeeping is marketing. Marketing techniques appear to vary with the individual. What makes sales for one only costs time for another. While Fuller advocates personal contact with retailers—”Go in. See them. Show them your work. Take them to lunch. Help.”—other jewelers find that this personal approach is costly in time and energy. Yager describes an ideal sales rep as one who is “sensitive to my work and goals, witting to create or seek out the markets I am looking for . . . one who looks for quality work without quickly changing taste and who understands and shares my esthetic and looks at jewelry as more than just merchandise . . . one who presents the image I want to present but perhaps even better than I am able to.” Not surprisingly, she is still looking for this rep. Most jewelers, though, find themselves somewhere in between learning how to be their own best rep and finding the perfect rep with a set of cloned esthetics. That is, a successful marketing program can be determined by how a jeweler is able to juggle maintaining personal contacts through correspondence, phone calls and personal visits and delegating responsibilities to reps and retailers he has discriminately selected.

Jewelers also have had mixed experiences with (and feelings towards) editorial coverage in fashion magazines. Some find that it is a helpful marketing tool only when done on a regular basis. Fuller adds that the results are elusive: Because coverage rarely results in specific sales, it is difficult to ascertain exactly how many sales actually result from it. Gilson is far less ambivalent. Asked whether he had found it worthwhile, he unequivocally states, “No. Headaches. Broken and lost jewelry.” Patient and forgiving jewelers, however, will probably agree in the end with Yager who shrewdly points out that “exposure never hurts and usually helps, somehow, somewhere along the line.”

From the points mentioned above, it is not difficult to see why most production jewelers, when asked of their long-range plans and aspirations, tend to answer in terms of pragmatic business goals rather than of creative goals for their work. Bunt speaks of having more people trained to do her production work, giving her the time, ironically, to do more one-of-a-kind pieces; Levine of artisans trained in her quality and design theory and a business staff to promote the work, both of which would allow her more time to design. Perhaps Yager again speaks for all when she says “I hope to give the marketing aspects to a sales rep and have a bookkeeper. I can’t guess what my work will look like, though I do hope it demonstrates five years of growth.”

“I went to grad school with two aims,” she continues. “To develop further as an artist, both esthetically and technically, and to somehow figure out some method of working that would allow a more viable means of living.” While most production jewelers have found that the latter presents by far the most imposing challenges, it is for the rewards of the former that they continue to meet these challenges. And these rewards are perhaps best summed up by Pam Levine: “I chose production jewelry for the constant demands to create new ideas and successfully incorporate them into the marketplace. I like knowing that production enables more than one person to enjoy a specific design. And I want to feel that my work is connected to a specific facet of the vast design community. There are those who view production jewelry as a compromise where nothing creative or quality-oriented can survive. To me, that is not a limitation, but a challenge.”