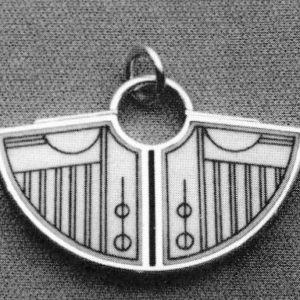 This is the third in a series of articles from Metalsmith about production jewelers. This installment concentrates on marketing production work.

Because production line jewelry provides a feasible means of support, as well as a way to produce well-designed pieces at affordable prices, most production jewelers will agree that monetary considerations have directed their vocations. Yet if economics motivate, it follows that how the line is marketed is of no less consequence than how it is developed on the bench; making the line visible is as important as making it in the first place. In fact, considering that most jewelers have had little or no business training, marketing and selling a production line can often be more challenging than actually producing the pieces.

Because their business background is so limited, jewelers almost always arrive at sound marketing strategies through an arduous trial-and-error process. Once achieved, the strategy, as opposed to the worth of the work, can be what makes or breaks financial stability. The strategy begins with pricing, itself often the result of a long learning process. While jewelers employ disparate techniques to price their work, most are nevertheless likely to agree that pricing formulas must remain flexible; the equation, however complex, needs to be loose enough to accommodate shifts in market and fluctuating costs in material and labor.

Thomas Michaels of Thomas Michaels Designers in Camden, Maine figures “price of used, plus labor, plus cost of diamonds used, plus diamond markup, plus marketing and sales commission costs all add up to the wholesale price of a piece.” For Patricia Daunis-Dunning of Daunis in Portland, Maine, the equation considers time, materials, profit and overhead. Dan Fleckenstein and Lewis of Ars in High Falls, New York determine price by determining what the market will bear, cost of materials and “how easy it will be to screw up a particular piece.” They add that “For precious metals, it seems to boil down to about three times the cost of materials, but it would be simplifying to say this was the entire formula.” While the equation varies with each jeweler, what doesn’t vary is the dictum that pricing remain flexible.

No less critical than how production pieces are priced is how they are marketed. Craft fairs and trade shows are the two avenues most traveled by the jeweler exhibiting his work to wholesale buyers from department stores, boutiques, museum shops and galleries. Studio sales can help as well, and personal visits to shops and galleries, though time consuming, can lead to sales that more than make up for the time. And often, it, is not so much a question of finding the right single route, as finding the right series of routes that. will meet and connect with one another to make for a sound, overall plan. On top of this is the fact that advertising and additional print promotion can be what determines the ultimate success of the marketing plan. Michaels, for example, attends JA (Jewelers of America) trade shows twice a year, selecting it for the way in which “the show is merchandised and marketed to potential buyers and for the quality of attending buyers.” But he reinforces the image he makes at JA with advertising in national trade magazines, catalog stuffers, trade magazine editorial coverage and, finally, regional sales representatives. Ed Miller in Kent, Ohio, on the other hand, has taken the art fair route and sells his work through a variety of different regional art and craft fairs throughout the East and Midwest, deciding which will be most profitable by past experience and by word-of-mouth. Fleckenstein and Lewis depend on a balance of both craft fairs and trade shows, determining which to attend by analyzing wholesale potential. But they also depend on personal visits to stores and galleries, promotional mailings and commissioned representatives. It is, as Michaels concludes, “difficult to measure individual effectiveness but easy to see the results of the whole program. I think the answer lies in an effective coagulation of all marketing techniques.” It should be noted here that these marketing strategies are aimed toward the wholesale buyer. These production jewelers do little or no work on consignment.

Whatever the strategy, most of these jewelers will agree that it is only enhanced by personal contact. Miller has found that personal contacts made at shows make for the most effective marketing. For Fleckenstein and Lewis, it is personal dealings with galleries that has rendered them such a successful outlet.

Fashion magazines are another avenue for promotion, although the actual success rate appears to be controversial. “Any good publicity simply adds to the impact of the total image,” says Michaels, who has benefitted from visibility in this medium simply by sending the requested materials to editors. Daunis-Dunning, on the other hand, calls it “a waste of time and energy and a loss of jewelry. Editors take samples and ‘lose’ them, or ‘misplace” them.” She advises that jewelers be prepared to donate pieces to the magazine as they will not, be reimbursed for the “loss.”

The salability of a production line also depends upon how it accommodates the market, or, rather, the whims of the market. Particularly in the jewelry industry, which has more than a nodding acquaintance with the fashion industry, taste, trend and recognition of what’s in vogue will have much to do with the marketability of a production line. “You have to keep your ear to the ground” says Daunis-Dunning, “for new thoughts, if nothing else. My line changes with every show.” Likewise, Miller accommodates the market simply by retaining pieces which sell and removing those that don’t. And while he claims to disregard fashion trends, he nevertheless does change his line every 18 months or so, replacing work with lower sales with work “that seems to have the broadest appeal.”

While it might seem that the production jeweler’s sales are to some degree at least dependent on the fancy of the fashion industry, jewelers have also discovered that there is another side to the coin. The creative jeweler may discover that his work can direct, as well as be directed by, the market. Says Michaels, “Being a trend-setter in the industry, I find that the market is created by the innovator. A new look or technique can always be brought to light and hence a new market established. Fashion trends are just that,” he adds. “Colors and styles affect the fine jewelry designer minimally in that the buyer of expensive fine jewelry wants them to be timeless pieces of good design rather than just fad or fashion.” There are two points to this. The first is simply that making jewelry, like any other creative endeavor, is an innovative process that can work to direct or shape popular taste, as well as answer to it. The second is that fashion is less influential in the fine jewelry market, in which expensive pieces are purchased for their classic appeal that will remain constant despite variations in popular taste. Pieces which are more affordable, on the other hand, may simply be bought to be worn for one or two seasons. And jewelers who recognize that these are two distinct markets that evolve from two very different buying incentives and market their work accordingly may enjoy the greatest profits.

While few jewelers would debate the fact that New York City is the hub of the marketplace, fewer still find that it is necessary to live there, or even to do most of their business there. “In fact,” says Michaels, “we often get positive reactions from our buyers who know that they don’t have to do business with ‘the city.'” Likewise, Miller tries to keep his business in New York at a minimum, after a particularly disastrous experience with one gallery in which he was unable to collect funds owed him until his attorney threatened litigation. Add to this the fact that operating a studio outside New York City is decidedly less expensive, and the fact that these jewelers limit their time spent in New York to occasional trade shows and visits, and it seems a sound business decision (beyond being a personal choice of lifestyle).

The jewelers whose work has been shown here define their work in very different ways. Miller refers to his line as art jewelry, while Michaels calls his contemporary American fine jewelry; Daunis-Dunning sees her line as high fashion, while Fleckenstein and Lewis consider their work “commercial, art, and commercial art.” What this tells us is that commercialism does not dictate the production jeweler’s esthetic, as popular opinion would so often have it. As the work — and words — of these jewelers indicates, innovation and imagination can be sustained in production work. And it is a commercial approach to marketing rather than esthetics that ensures their profitability.