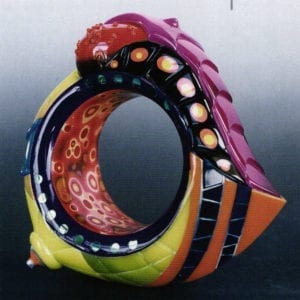 The history of contemporary English jewelry started in October 1952, when the young painter Gerda Flöckinger registered at the Central School “in order to learn how modern jewelry is made”. Right from the start, the young artist revealed an extremely rich language of forms, but she still had difficulty finding a niche on a market dominated by commercial jewelry. The first people to believe in her were Graham Hughes, the courageous Artistic Director at Goldsmiths’ Company, and Mary Quant, who displayed Gerda Flöckingers jewelry in her shop windows right after she opened her boutique Bazaa along Kings Road (1955). 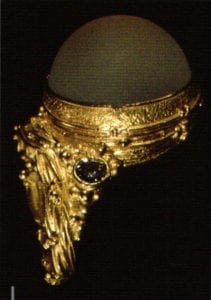 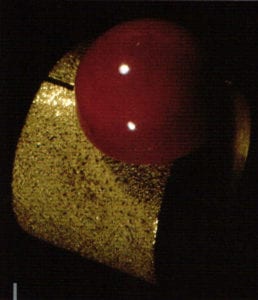 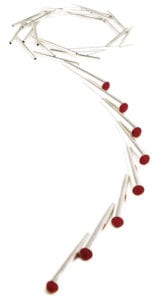 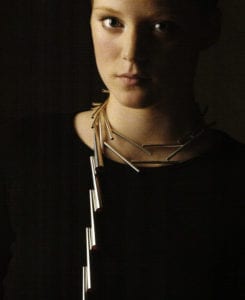 When the Hornsey School appointed Gerda Flöckinger to the Chair of Goldsmith Art from 1962 to 1968, her courses were met with great success; a contribution to this was the anti-conformist wave, prevalent at the time in England. In 1962, the first single by The Beatles, Love Me Do, was also released, while Mary Quant launched the miniskirt two years later. The age of revenge then dawned for many forms of expression, such as pop and rock music, fashion and also in a certain sense creative jewelry, which had been strongly underrepresented in the fifties. For example, the art gallery opened by Ewan Phillips in London also lent appreciation to goldsmith artists, presenting their work next to pieces by sculptors such as Henry Moore. Shortly thereafter, Phillips invited Emmy van Leersum and Gijs Bakker from Holland to exhibit their voluminous aluminum necklaces and bracelets, which they had designed as industrial products (at least this was the intention), conceived for the mass market. 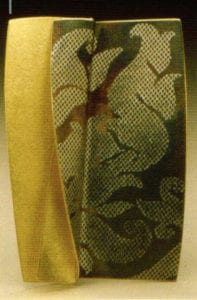 Pure design was a source of fascination for several English goldsmiths such as David Watkins or Susanna Heron; however, the group of artists that joined them between the end of the sixties and start of the eighties in order to break open the traditional clichés (Wendy Ramshaw, Caroline Broadhead, David Poston and many others) was characterized by stylistic diversification. Some worked with gold, while others drew on “more democratic”, alternative materials, above all acrylic materials, which went hand in hand with a language of style reminiscent of pop art. During the eighties, moreover, the “return to gold” developed a strongly experimental style in Great Britain, even before this was observed among many European artists: Heron, Broadhead and Pierre Degen crossed the boundaries to the fields of clothing, sculpture and performance. 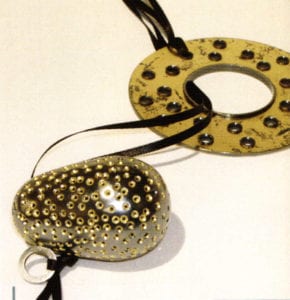 In view of the fact that many of the protagonists of these avant garde styles now teach at universities, it is hardly a surprise that the students enjoy the freedom to experiment. It is rather a pertinent question as to whether the new graduates will still find their place. But two national characteristics are important in this respect: The first of these is a well-oiled funding, support and communication system. The Crafts Council (with headquarters in Islington) has a large library, an online shop window, the journal Crafts Magazine, a gallery shop and also offers young artists access to low-interest loans. The Association for Contemporary Jewellery, which has over 600 members, holds exhibitions and international conferences (the next one in spring 2006) and publishes the journal Findings. The Goldsmiths’ Company, an institution with a history of seven hundred years, and the Goldsmiths’ Hall as a worth headquarters near St. Paul’s Cathedral is more dedicated to tradition. The organization has a rich collection of golden jewelry and regularly commissions artists with the production of pieces. The same is true of the Victoria & Albert Museum. However, the numerous galleries are the best customers for the artists – the Electrum in London and the Scottish in Edinburgh are the most famous – in terms of exhibiting contemporary jewelry. There are also “Museum Shops” spread over the entire country. 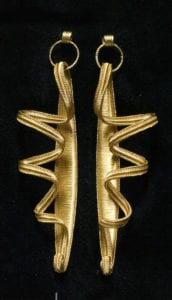 However, the institutions and collectors mainly purchase work from established artists. And the other “makers”? No doubt, they can draw on another special factor in Great Britain, namely the pronounced sense of individuality: Many people prefer to have something original and hand-made than a mass product. In this customer segment, the makers achieve high price margins, whereby the style is mostly located somewhere between design and fashion. This and more is on show at the many trade fairs such as Dazzle, the Goldsmiths’ Fair held in the Goldsmiths’ Hall, Chelsea Crafts and Collect, organized by the Council in the Victoria & Albert Museum. 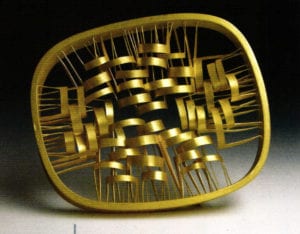 Not only the customers, but also the much-lauded artists dislike blindly following trends – even if many of them without doubt have a form of “national” brand, which comes with a small dose of dislike for excessive conceptionalism, a certain respect for function and a degree of creativeness born of their relationship with the materials. Apart from the many ideologies, numerous artists work with precious and non-precious metals: Dorothy Hogg, who performed the miracle of winning a Diamonds International Award as a teenager, and Maria Hanson, who skillfully combines metal with paper and nylon. And some of them develop inimitable processing methods that become a certain design trademark. Jacqueline Mina invented the fusion-inlay, a method that enables very light platinum structures to be cast on gold bases, thus creating an incomparable effect. 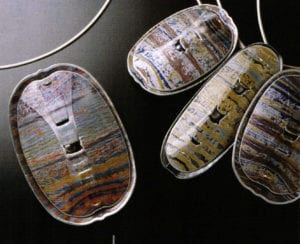 Catherine Marlin is unique with her translation of the Japanese Kumihimo technique (woven silk for formal dress and samurai attire) to goldsmith art, whereby she replaces the silk with extremely thin gold and platinum threads, producing sensational results. For Jacqueline Ryan also, who has lived in Italy for years, the crafts component is the essence of the creative process: Nature is taken as a source of inspiration and interpreted with English creativeness, Paduan technique and Mediterranean love of yellow gold. Conversely, Jane Adam draws on annealed aluminum, which enables her to design the archaic forms of her jewelry with extravagant motifs, reminiscent of her great passion for India and Indian materials. 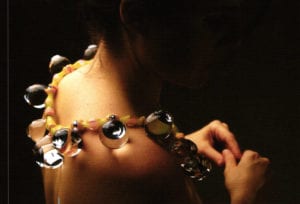 Peter Chang is a case apart. As sculptor and printmaker, he focuses on jewelry and functional art, whereby he draws on plastic – acryl, polyester and PVC –, not for ideological reasons, but because they are an ideal means to designing and realizing his individual vision of color. In order to elucidate the fascination of the micro-sculptures, one can dig in the artist s rich cultural substrate (Taoism, Jungian theories, mythology and fractals) or in the ornamental and architectural role models, which the designer finds in the world of flora and fauna and which Chang had investigated long before bio-mimicry came into fashion. In simple terms, Chang creates a rich world of images, expressed in fabled beings and providing the impression of a life gripped by constant transformation, conveying multiple levels of interpretation with a strong erotic component Adam Paxon also works with colored acryl, relying on its ability to capture light and a series of inserted ‘special effects’ (magnets and mirrors), in this way, he succeeds in conveying joy, sensuality and a most pronounced life energy.

We have not done justice to the artists of the first generation, although they remain most creative. Gerda Flöckinger also does not focus solely on the Iris germanica, which she cultivates in her garden, but instead still creates excellent pieces. Let us not forget that the history of contemporary art is still young. 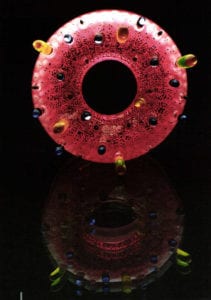