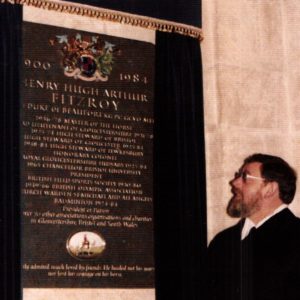 The Enamelware of Alan Mudd

The English enameller, Alan Mudd, born in Lancashire, began his studies in the fine arts, and served an indentured apprenticeship as an engraver in the textile industry. This gave a wide-ranging background in design and comprehensive skills in engraving, extending, for example, to preparing copper rollers in the stipple manner for pattern printing.

He finished National Service, but finding that the traditional textile industry had by then disappeared, he transferred to London in the 1960s, and joined the specialist enameling workshop of C. F. Barnes. This had been founded in the 1950s by Fred Barnes, who supplied the jewelry and goldsmithing trades, as well as insignia makers. Beginning there as an engraver on precious metal for enameling, Alan Mudd trained subsequently as an enameller in the traditional techniques, including in the refined styles of guilloche work in the manner known as Genevan techniques. 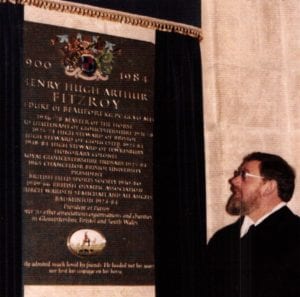 H. M. the Queen unveiled. this great commemorative panel to the Tenth Duke of Beaufort, at Gloucester Cathedral in April 1986. The picture alongside, shows Alan Mudd attending at this unveiling. The large enameled silver gilt crest set into the top of the panel was made and enameled by Alan Mudd, and Keith Seldon painted the plaque set at the lower edge, showing the Duke on his horse.

Alan Mudd continued in the Barnes workshop, in Clerkenwell (in London), for over two decades, and worked concurrently as a part-time lecturer at Middlesex University for 15 years. During this time the business changed to a partnership, then a limited company, with Fred Barnes, Alan Mudd, Philip (Phil) Barnes (son of Fred), and Keith Seldon, (the enamel painter) as the core members.

By 1985, in the next phase of the workshop, Alan Mudd continued together with Keith Seldon as an employee, and Phil Barnes chose to set up his separate enameling studio. After another five years, Alan Mudd as reward for his loyalty formed a new partnership with Keith Seldon, with the workshop continuing in Clerkenwell until 1995. When both changed to working independently, Dereham, Norfolk became AIan Mudd’s base. The influence of the craftspeople associated with the C. F. Barnes workshop has however continued, and very importantly, both in the making of luxury objects with traditional enameling expertise and in the teaching of these skills.

Alan Mudd has focused on champlevé and in guilloche enameling in the manner of the Genevan method that has been paramount for luxury objects. He has worked too in other techniques, including painting. For guillegh6 in the Genevan method, the underlying steps include the preparation of the metal bases either by engine turning, which is undertaken with large, complex ornamental turning lathes by other specialists, or the designs are created by the engraver-enameller by hand work in the flinking style.

This preparation gives the metal precisely cut, slightly angled incisions in parallel geometric, phased waves and other patterns in such a way that there is maximum reflectivity of the gold or silver surface. When clear enamel colors are fused over such a surface in thin layers, the translucent effects are increased and a duality of hue is produced. The combination of patterning and colors is usually with straight line designs coated with deep colors for strength of hue, while the pale enamels are laid over curving designs to enhance the clarity and limpidity of the glaze.

For guilloche enameling the preparation of the colors, their application and firing have to follow the most precise sequences and need very controlled firing. This includes grinding the enamels from lump into powder with evenly sized grains, varying the fineness of the paste made in this way according to stages of completion.

The control of the final depth and smoothness of the glaze is vital, and for finest guilloche work the last stages are those of crowning, or fluxing: that is, by adding a finishing coating of clear glass (flux). The fluxing stages require two or three fine layers of enamel, fired and stoned down to keep the final coating very thin and smooth. That is followed by refiring or by the long process of hand polishing. In this way the colors are left lustrous and flawless, and perfectly flush with the metal borders or divisions of the piece. This manner of fine guilloche work was the specialty of the Genevan ateliers and the craftsmen trained in succession by masters in these methods.

This caliber of guilloche work, with its visual illusions of moiré patterning and great brilliance, had become renowned for the ornamentation of gold snuffboxes in the eighteenth and nineteenth centuries, and for other costly objects of vertu. Guilloche is, of course, now best known to the general public in connection with the acclaimed display pieces made in the early 1900s in the Faberge workshops. The transmission of these processes depended on direct teaching, and Alan Mudd is one of the now very rare experts to continue to the present in such enameling methods.

The direct link between Genevan methods of enameling and a very few London ateliers exists through the influence and teaching of Henri de Koningh. This Genevan enameller, who set up his London workshop in about 1900, supplied a great number of U.K. jewelers and goldsmiths for almost three decades and he trained a few apprentices. De Koningh is now best known as the translator into English of Millenet’s famous manual, Enameling on Metal. In this slim volr.rme, Millenet was the first to reveal in published from the Genevan methods, notably for guilloche work with fluxed finishing.

However, Millenet was still somewhat guarded in giving details, stressing that full masterly needed long training and considerable practice. De Koningh brought out an important complementary summary, covering base metals as w.ell as gold and silver bases, The Preparation of Precious and Other Metal Work for Enameling. Both books stand as the leading sources in literature on this quality of traditional enameling.

The De Koningh workshop passed to new ownership in the 1930s, maintaining the standard of craftsmanship. There was also the continuation of the custom of workshop reticence on the methods for obtaining the most exceptional guilloche work and fluxing of small painted enamels that give such pieces their brilliance or ‘éclat’. Fred Barnes, as a teenager found his initial training in engraving and enameling in this workshop, and when he later founded his own atelier he passed the knowledge to a few of his workshop colleagues, including, of course, Alan Mudd.

As for most of the trades connected with jewelry and display objects, where the finished objects depends on the skills of several experts, individual names are seldom known outside the makers’ circles, and only the retailers’ trademarks are added. For many of his pieces, therefore, Alan Mudd has worked in collaboration with goldsmith-designers, adding enamels to such objects as table clocks and exhibition pieces.

Extraordinary pieces too are made: such as enameled silver peacocks and flamingos, in life sizes, commissioned by the London firm of Garrards in the I990s. For such commissioned ornamental work the sketches and drawings supplied by the designer must of course be interpreted to suit the enameling process, and to give the optimum effects with these materials. Another mainstay, of the workshop is the making of Masonic, stately and military insignia, requiring the use of precise heraldic colors.

In the craft traditions, copies of earlier pieces are also made to commission, and these have included picture frames in the Faberge style as well as decorative Easter eggs, etc. Importantly, Alan Mudd also creates outstanding pieces to his original designs, such as sets of chessmen, for which he adds his own mark. For commissioned work he now concentrates only on specialty

For his wider involvement in modern enameling, Alan Mudd has served as Chairman of the Goldsmiths’ Craft Council, he is a Freeman of the Worshipful Company of Goldsmiths and he has been an influential and inspirational teacher of enameling in various colleges around the country and the European continent, as well as occasionally training private pupils.

Ganoksin is sponsored by
By Erika Speel [Volume 28, Number 2, April, 2009]
In association with