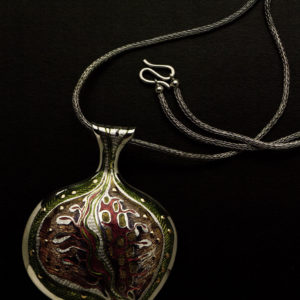 Harold Hasselschwert: Materialization of the Exotic

Possibly of another time and almost certainly of another place, Hal or Harold Hasselschwert enamels entice the imagination with the exuberant colors and patterns, and their delicate constructions. His elegantly enameled panels speak to the viewer an intimate yet exotic language. Although his passing on June 3, 1990 leaves a tremendous void in the world of jewelry and enamels, the loss of this consummate artist, craftsman and teacher is eased by the rich legacy of his art.

Harold Hasselschwert made his home with his wife Jean and four children in his native Northwest Ohio, where for 30 years he headed the Jewelry/Enamels program at Bowling Green State University. During his tenure, he was consistently recognized for the excellence of his craft and his dedication to teaching. Over the years, Hal participated in numerous national and international exhibitions and received many prestigious awards. His work has been widely acknowledged, and is included in many public and private collections. 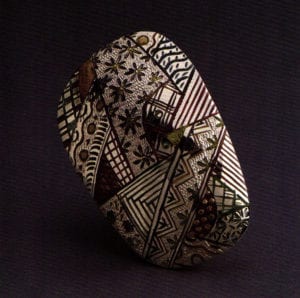 Hal Harold Hasselschwert’s involvement in enamels began in 1948 when, as a high school student in Toledo, Ohio, he took jewelry/metals as an alternative art course. Although he worked in various media including painting, printmaking and sculpture (and continued to use these media in later years), it was jewelry/ enameling that captivated his imagination. For Hal, the rich jewel-like quality of the engraved and enameled surface suggested a timeless journey into both the past and the future.

After military service, Harold Hasselschwert returned to the Midwest where he resumed his investigation of jewelry design. Working first at the Cleveland Art Institute, he later attended Bowling Green State University where he earned his B.S. (1958) and M.A. degrees (1959). In 1960, while working as an interim instructor at Bowling Green State University, Harold Hasselschwert applied for a Fulbright Scholarship; his intention was to travel to Denmark where he hoped to study Danish holloware techniques. Acknowledging his qualifications but the unavailability of a position in Denmark, the Institute of International Scholar Exchange suggested that he might look instead to India for possible studies. Harold Hasselschwert accepted their offer, which allowed him to study for one year at the Government College of Arts and Crafts in Lucknow, India. 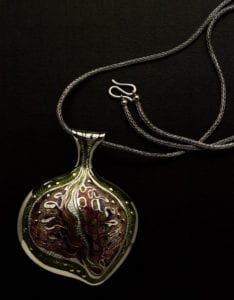 This experience became the turning point in his esthetic. While at Lucknow, Hal studied the Indian traditions of engraving, repoussé, enameling and filigree. His experience with the master craftsmen of Lucknow and the brilliantly engraved surfaces of Indian copper and silver, fortified his growing passion for ornamentation. In later years, extensive travels to the Far East, Eastern Europe and Asia served to reaffirm his affinity for the decorative.

Above all, Harold Hasselschwert was a romantic. His work reflected a fascination with beauty and the exotic. He did not limit his jewelry design to any single style, but rather embraced many different historical sources and artists. Details from Indian, Oriental and Asian cultures, along with elements from the Baroque, Art Nouveau and Expressionism combined to produce uniquely personal objects. He often spoke of his regard for Gustav Klimt and Egon Schiele, particularly for their use of richly patterned surfaces and the expressive quality of their line. 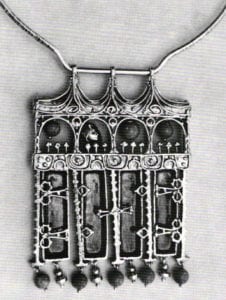 Untitled Pendant from 1970 suggests an unmistakable kinship to the Indian engravings of Lucknow. Hal’s use of handtooling and the overall patterning of the surface recalls the highly decorative motifs typical of Indian metalwork. However, the Fresh organic flow of his design coupled with the asymmetry of its composition is a notable departure from the formal, symmetrical style characteristic of Indian work. In this piece, Hal combined handtooling and colored enamel with delicate gold overlays to create an object far more expressive than decorative. The interplay of brilliantly cut metal and rich translucent colors creates a tactile depth of surface. Harold Hasselschwert felt that this champlevé application of enamel, combined with tooling of the surface, created and greatest saturation of color. In addition, the crisp tactile appearance reaffirmed the balance between metal and inlay.

Another piece making similar use of metal and enamel is Untitled Brooch from 1989. Here Hal composed an opulent surface of contrasting patterns. His use of enamel, although meticulous and restricted, lends this piece a fullness of gesture and spontaneity. Its carved surface and geometric patterns suggest connections to Eastern motifs, especially those found in textiles. Although quite intimate in scale, its full rounded form projects a feeling of monumentality. Like some hidden script, its symbols demand closer investigation. 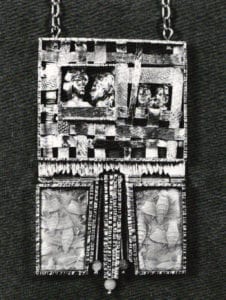 Hal’s great love was jewelry; however, very often he left that format to explore the expressive potential of enamel in a more graphic sense. In recent years, this investigation had led to a number of panels and shallow vessels. Comprised of copper, cut and freely shaped, these objects served as ground for vivid paintings in glass. One such panel Untitled Copper Plate, from 1983 (see inside front cover), utilized Limoges enamel, with a sgraffitoed foundation and impasto overlays of transparent color that build a surface of vibrant contrast. The warm luster of fluxed copper, edged with red oxide, intensifies the brightly colored patterns. As in his champlevé jewelry, Hal’s subject matter is abstract. Vertical rows of brightly patterned stripes seem contained within the overlaid horizontal bands of similar pattern. The resulting panel makes clear reference to the physical, suggesting the tension of tightly bound bolts of fabric, each slightly yielding to the force.

While much of Harold Hasselschwert’s work addressed abstract imagery, that was by no means the rule. He enjoyed storytelling and enamels/jewelry was a wonderful medium through which to tell a story. Although his interests were broad, Hal most liked classical mythology and fantasy. In these themes, Hal drew inspiration for a number of figurative works throughout his career. Often, as with his untitled pendants from 1977 and 1978, such pieces were expressively modeled in wax and cast in silver to retain their gesture. Later, enamels and precious stones were added to heighten their impact. With lost-wax casting, Hal found a way to obtain the spontaneous forms unapproachable in constructed work. The rich textures of his castings balanced perfectly with the contrasting gloss of enamel. 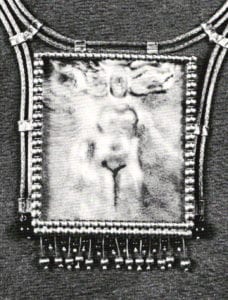 Harold Hasselschwertdistinguished himself with his ease and confidence as the head of Jewelry/Metals at Bowling Green State University for 30 years. His patience and insight earned him a well-deserved reputation among students and faculty. He shared his enthusiasm for jewelry and enamels with all who would listen. Regularly, he would display the objects and treasures of his considerable travels for students, and he delighted in the interest and dialogue they provoked. Very often he included these exotic pieces in discussions of esthetics, technique and function in the classroom. Harold Hasselschwert challenged his students to look for inspiration everywhere, to take pride in their craft and in the objects they produced.

Harold Hasselschwert loved the process and “feel” of jewelrymaking along with the directness of the communication with the viewer/wearer. He reveled in the product and the fact that, once completed, the object breathed its own life. Hal made no pretense about changing the world; he simply wanted to create objects that by their mere use and beauty vitalized life. A well-crafted, beautiful object was his aim and the goal that he achieved as an artist.

Tom Madden is a metalsmith and Instructor of Art at Bowling Green State University, Ohio.