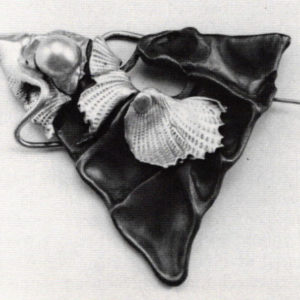 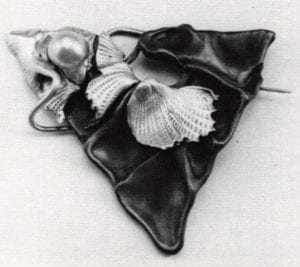 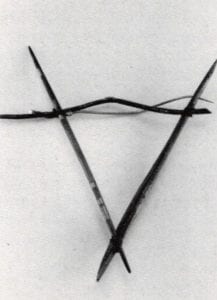 Paulette Werger, U. of Wisconsin, Fishing Memories I.

The student and faculty pieces in the exhibition represented a good cross section of metalsmiths today, from purists to a more risk-taking avant-garde, Rather than admiring or envying technical accomplishments, at this exhibit the viewer was drawn to the underlying esthetic expression of the pieces: This was exemplified by Mary J. Koehl’s brooch Sand and Water Series 7, where organic overlapping and integration of a cast silver shell and a baroque pearl into repousséd copper evoked a walk on the beach. The composition alluded to waves with seaweed and tide life in the crevices of the shore and rainbows in the bubbles on the beach. A second sensitive image was Missy Chang’s Small Container on Base. To me it looked like an eternal flame of broom straws and silver caught forever in an instant of time. The viewer seemed to be thrown into a metaphysical trance where lime no longer relates to reality. These two works were more than mere objects of adornment or beauty, they showed the artists’ observation and sensitivity to their environments.

Missy Chang, Boston U., Small Container on Base.

Rather than relate familiar imagery, the avant-garde is asking questions. The pieces in the exhibition that illustrated this attitude were those by Paulette Werger and Clair Sanford. Werger’s Fishing Memories I forced the issue of meaning because technique and intrinsic material value were played down. Sticks lashed together hardly qualify for technical or material status. To appreciate the work one had to concentrate on composition and intent. To me the work conveyed the idea of a place you might find at the bend in the creek where debris is trapped and continues to float in the high water, until the creek recedes and it becomes still, entangled. Entwined in the piece were materials, such as a fishing float, leftovers of an old reel or pole and some willow twigs. That chaotic feeling was then contradicted by some simple lashing. This made the placement of the twig, fishing float and sticklike forms important because of the decisionmaking that allowed them to arrive there. The hand of man becomes obvious, through observation, expression and composition. Clair Sanford’s Untitled Vessel also penetrated the area reserved for the “fine arts,” where idea is the first concern. The piece had to be judged on its own merits, not on preconceived metalsmithing expectations. While trying to project a function for the piece, one had to find out what special use it has been designed for, if any. This work had the aura of being a special vessel for an unfamiliar ceremony. The use of a temporary material such as paper in conjunction with metal—a material deemed permanent—further suggested mystical powers or ritual importance.

The four pieces discussed here reflected the artists’ attitudes towards their medium. Some were content to express their ideas with established methods, while others allowed the idea to establish the method. Through these attitudes the artist’s sensitivity was allowed to express itself. Sensitivity and expression were the keys that moved the works beyond craft, because they allowed the pieces to communicate something beyond utility. 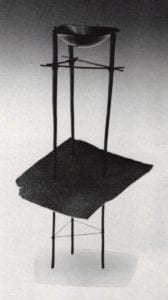