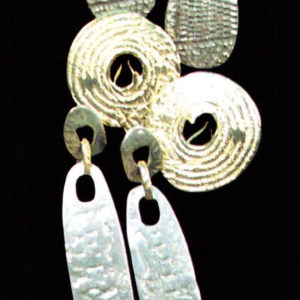 Santa Fe jewelry designer Kathleen O’Rourke is describing a move whose opening shot shows a Celtic queen riding horseback, her fur robes flying, metal jewelry clanking. “I’m attracted to women like that,” O’Rourke says, laughing. “Like Wonder Woman or Virginia Woolf, Georgia O’Keeffe; women who do what they do and resist al the pressures to fit in. They have inspired me certainly, but I’m not nearly so brave.” 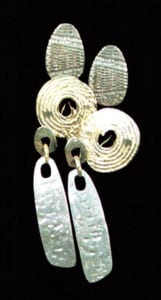 On closer inspection the comparisons – from a fictional ‘can-do’ television heroine to a maverick, individualistic artist – seem apt. O’Keeffe, a fellow New Mexican who moved full-time to the state in the late 1940s, lived out her life rendering the canyons and mesas, flowers and bones of the Southwest into realistic and abstracted shapes. The assignment of meaning to her work was most correct, from the artist’s point of view, when it joined up with a kind of sensory, experiential recognition on the part of the viewer. An anecdote O’Keeffe once related concerns a canvas wherein curvy strips of pink dissect the blue, run alongside it, meander here and flow wide there. While the painting was hanging at a museum exhibition O’Keeffe came upon a man saying to his companion, “They look like rivers seen from an airplane.” “I felt pleased,” the artist said, “that he saw what I saw.” 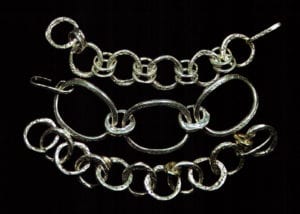 Such simplicity conveyed through shape and composition is at the heart of the jewelry designs O’Rourke creates. She describes her technique as “very primitive but it works for me.”

Juxtaposing the commercial popularity – and affordability – of O’Rourke’s work with her self-definition as a designer whose methods are simple, one is reminded of the Wonder Woman character: Nobody runs O’Rourke’s business for her, she runs it herself. Even that could be amended to say that the business just about runs itself. “People ask me what to do to get out there, and I don’t really know,” she says with characteristic frankness. “I didn’t have to do much except make the jewelry and it generated the business. I’m grateful. I’m lucky.”

No one taught O’Rourke how to make jewelry. The only class she ever took (in sawing and soldering) was 20 years ago at the University of Arizona. Like Chauncy Gardner in Being There (he “liked to watch”), O’Rourke taught herself a simple fabrication method by watching her then-husband work and fiddling around with hardware-store tools and sheet silver and brass. In 1987, upon winning her biggest account with The Golden Bough, a chain of stores, O’Rourke hired two full-time employees to help with her production. When the recession hit, she let them go. Today she proudly shows off a streamlined operation and a higher level of efficiency with which to produce the new designs that her clientele requires. 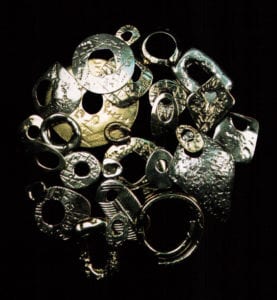 O’Rourke’s aesthetic is concerned with pure metals. She used stones in the very early years, but since defining her style, has not continued using them because “stones seem superfluous to the work.” The shapes she fabricates occasionally take on a “stone quality.” Two bracelets, RI 1 and RI 2 are punctuated with a chunky piece of silver or brass, set off center. “RI” stands for “river stones”; she imagined the shapes during a camping trip with her husband. In O’Rourke’s vocabulary, the metal doesn’t have “topics”, but it has “pieces” and “chunks.” Its aesthetics are understated, functional, and wearable. To O’Rourke, pieces must work, and “work” means that the objects provides the wearer with the tactile, sensual qualities of movement, fluidity and integration with the body – a subtle and decorative enhancement.

Seven years ago marked O’Rourke’s “change, when, persuaded by a jeweler friend that she needed to subcontract more of the work, she left her originals with an Albuquerque caster. The originals from the 1970s and ‘80s that she continues to show have a cherishable quality. One wants to be feel them, as if the forms reveal their process of evolutionary development, long before any trips to the caster.

The beginnings of O’Rourke’s jewelry making coincided with the end of her first marriage. Most of her early pieces were large, flat-hammered silver, inspired by Egyptian and pre-Columbian designs. She made a linked belt of elaborate brass eagles, wings outspread and overlaid with silver feathers and each one with a turquoise eye. After the belt she created arm-cuffs to be worn above the elbow, large earrings, and a breastplate that draped from the collarbone to the back. 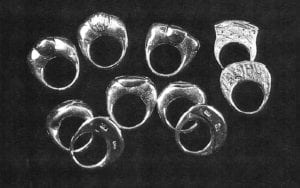 By 1972 O’Rourke had met Michael, her second husband, who worked at the Arizona Sonora Desert Museum “and could bring home lots of feathers”. His zeal for animal life – badgers to seals – helped inspire many depictions in metal. O’Rourke began working more dimensionally, fabricating pieces out of sheet to get double layers that would be rough on the outside and smooth on the inside. “I never drew anything,” she says. “I used scrap silver and had a strong feeling about the size and shape. I would start with a heap of scrap on the board, a tool in one hand and a hardware store torch in the other, with the tank balanced on my shoulder. I’d heat the metal to a viscous state and work it like clay. At a certain temperature I’d cool, quench, hammer and heat it again. I did this three or four or five times until I’d get the texture and shape I wanted and start working with a hammer, then file and grind [the work].”

By the late 1970s O’Rourke had added rings to her line and was making Koros, which is her name for the pendants grouped together and worn on cords. These biomorphic forms were hand-fabricated from silver, copper, and brass. Old Navajo stamps became another inspiration and tool for O’Rourke. The stamps which have symbols from Navajo cosmology are used to create gridded designs directing both the form and the iconography of the pieces. Today the stamps are always near her hand at the workbench.

O’Rourke says that the years after 1982 of coming to grips with some difficult times in her past marked her transition to becoming a serious jeweler when she began her first experimentations with steel. The first were ring sets with steel backs, and bracelets with steel and silver overlay. Texture became all important. She would use the Navajo stamps to create and visually complex surface designs while she explored the notion of wearable architecture in combined groupings. 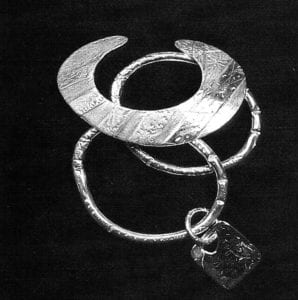 The intractability of the steel posed the biggest challenge for the artist. “I was hand sawing from 20-gauge steel and it took a long time to get the shape out. It was a long process where I had to figure out how to solder other things to steel. You learn what the right temperature is because if it gets too hot, the steel will oxidize and get a crusty later on it and won’t solder at all.” Yet, it finally was her ability to work the steel that propelled both her aesthetic and her career forward. A two-sided steel and silver domed bracelet provoked much publicity.

Important source materials for O’Rourke are the gifts that friends give her on her October 31 birthday: Halloween kitsch, death-head stuff, and some more serious objects. Another unusual source is weapons which, for O’Rourke represent one of the highest design aesthetics. “I love folk tradition arts, from simple, tea ceremony pieces to sword-making with its more elaborate processes,” she says. Therefore it’s fitting that an African wrist knife hangs alongside many of the hand Milagros that friends have given her, talismans to protect those parts of us we most need and value from harm.

Increasingly, the demands of her business have left her with less time for herself, and she says she’s now feeling the need for one of her periodic, self-renewing getaways. Even though her professional life over the past seven years has involved subcontracting parts of the process to casters, she still involves herself in the processes, not wanting to loose those moments of discovery. She fabricates the models in metal and later solders and assembles all the cast pieces by hand. Link bracelets have became a large part of her inventory – big, ergonomic links with designs on every piece, and charm bracelets that she produces with surface etchings. 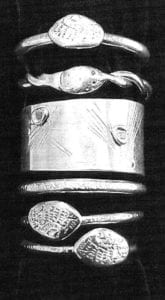 “In looking at what I’ve done I see I have almost gotten more primitive, not more complicated and slick. I just went back to what works to do new pieces…. I feel strongly that jewelry should be worn all the time. What’s the point otherwise? It’s like putting the good silverware away.”

“With subtlety something can be extremely rich and understated at the same time. I like my jewelry to feel good. I always wear it and handle it. I have my camping jewelry, my driving jewelry.” O’Rourke laughed out loud recalling the last time she went on a diving trip with Syd, “it dawned on me later that possibly I should make diving an exception. I came out of the water, looked down at my hands (covered in glittery, shark-attracting rings) and said, ‘that was good, Kathleen.’”

Ellen Berkovitch is a writer who resides in Santa Fe, New Mexico.