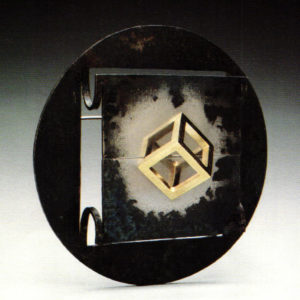 by Patricia Harris and David Lyon

Joe Wood says he was first attracted to jewelry for its economy – the opportunity to focus a great deal of intensity in a small object. That is, he likes to make big statements in small forms. Wood’s artistic impulse over the years has been primarily sculptural rather than ornamental, architectonic rather than organic. And yet … “Right now I’m interested in the psychological reasons for ornament – the impulse to ornament,” he says.

Wood has a restless mind. He graduated from SUNY Buffalo with a bachelor’s degree in art education and design (with a concentration in jewelry). Dissatisfaction with production work sent him back to graduate school to earn an MFA at Kent State University in 1984. Since then his extremely varied body of work has followed two continuing threads: the exploration of abstract ideas embodies within objects and the manifestation of the inherent properties of his materials. 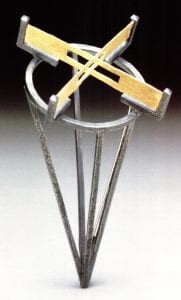 Concepts, he finds, present themselves, but not always in a fully formed fashion. For example, he relates, “I was driving down the road and saw a new way of making retaining walls by piling rocks inside chain link fence.” He was intrigued by the juxtaposition of disordered loose material within a highly ordered structure. “The two were working together in a funny kind of way,” he recalls. “I wanted to make something that was about that.”

One of Wood’s first pieces to deal with caged forms was Black Halex Neckpiece, 1986, a work he cites as a personal breakthrough. Black, painted ping-pong balls float freely within the steel frames, which are in turn hinged on black-plated brass T-connectors. The juxtaposition of the abstract spheres within the artifact of the frame creates a kind of tension between the ideal and human that is always present in Wood’s work, though not often as explicitly. 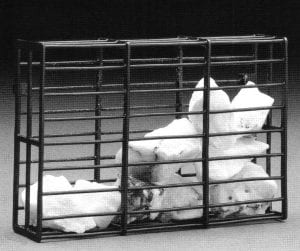 This contrast of hard-soft or ideal-artifact is one of the most persistent themes in Wood’s jewelry and other metal work. The 1987 Reflective Brooch contemporaneous with the caged work but involving a different approach to composition dramatizes the tension between two materials (oxidized steel and 14k gold) rather than two forms.

Long Cage Brooch and Square Cage Brooch, both 1988, demonstrate Wood’s further exploration of the explicit metal cages (both contain alabaster chips that stand in for natural rock) as they relate to states of being and becoming. The strongly vertical, tapering structure of Long Cage emphasizes the binding forces of gravity and friction: compressed into the base of the cage, the rocks are immobilized. Despite their unformed appearance, they are contracted into stasis by the restriction of the cage. The structure of Square Cage, however, permits lateral movement, allowing for random rearrangement within limits imposed by the cage.

During this same period, Wood began to introduce cordage, usually nylon threads, into his pieces. Brown Shell Brooch, 1988, brings together a number of his technical and compositional fascinations with a shell inside a cage a round form: displaced natural material, cage, and radial symmetry.

“I’m drawn to hypnotic imagery, especially centrally located fixed-point images,” Wood says. The beauty of such images, he believes, is that they are not illustrative or allegorical – they’re simply focal points from which formal relationships emerge. In the case of Brown Shell Brooch, it takes a moment to realize that the front and back of the cage holding the shell are not composed of metal bars but of black string, an antithesis of the imprisoning strength and rigidity of metal. Same form – different properties.

In subsequent piece using nylon string in lieu of metal bars, Wood begins to dissolve the physical imprisonment of the cage into purified, abstract lines of force. Suspended Rock Brooch employs nested circular forms with a rock suspended in the center on string that literally holds the entire piece together. The effect is of floating parts, with the string as a physical reminder of the force vectors that would stabilize such a system.

By the time Wood reached Stem Grill, 1989, the strings were demoted to sketches, perhaps because his primary interest had shifted to the properties of materials. This Furunoff bowl of steel and sterling silver was the first piece in which Wood used a burned oil patina.

“I wanted to do something where silver does best on its own – takes a mark and gets stained,” Wood explains. “I had used black plating on the metal to get a saturated color, but it was unsatisfactory because it had no character.”

Wood began experimenting with smoked and burned oils, discovering that he could achieve the effects he sought by coating the metal lightly with oil and heating it in a furnace or with a torch to temperatures from 700 to 900 degrees. To get even coverage the metal needed to have “a real tooth to it.” So he took a piece of granite and struck it against his bench hammer to mar the hammer face, then used the hammer to texture his metal. “It gives a tooth to hold the oil and gives the metal an ambiguous age,” he says.

Wood learned that different oils have different properties. For most of his work he favors linseed oil for its tendency to pull apart into vein-like structures. He also uses olive oil. “As I experimented with the oils I discovered that under the right circumstances, I could achieve an effect like paper. That led me to thinking about drawing.”

Indeed, Wood called his next body of work the Drawing Series. The simple geometric projections drawn on the metal with carbon “look just like textbook drawings on white paper,” he says. “They deal with relationships between centers, the locus of points, how a circle is inscribed.” The brooch Reach, 1989, illustrates his basic approach. Lines drawn on three overlapping circular plates of silver define the rhythmic and dramatic relationships of forms. The smoked oil patina creates a parchment effect on the surface and Wood enhances the drawn geometry by removing a portion of an arc – a physical manifestation of boundaries imposed by an abstract line.

Wood notes that many who had championed his earlier work found the Drawing Series perplexing, perhaps because his signature objects (shell, rock, and thread) were absent. But Wood doesn’t believe in consciously trying to develop a recognizable style. “If you’re going to pursue ideas, you have to vary your material, vary what your directions are,” he shrugs. “Maybe in thirty years you can look back and see a continuity….” Continuity in Joe Wood’s work lies less in the resemblance one series of work may have to another and more in the permutations of his struggles to elucidate the abstract with the tangible.

Given Wood’s propensity for construction, it is unsurprising that he followed the austere and abstract Drawing Series with a return to the solidity of three-dimensional composition. The sterling and gold pieces of the Moment Series, 1990, demonstrate a continuing geometric concern, but one that involves the intersection of one-, two-, and three-dimensional space. Each silver cone defines volume on its open end and a single point at its tip. The gold crosspieces, rendered as if they were two-dimensional, vary in the placement of their central cutouts to define a point at the mouth of the vortex.

But even as he pursued these geometric concerns, Wood was pondering his personal attraction to architectural ornament. “I’ve always been drawn to the rosette, especially the smallish ones you see over windows or doorways in the Boston area,” he says. 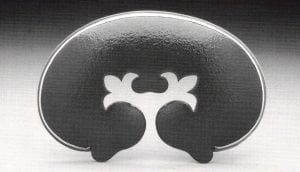 His exploration of the significance of ornament began with a series he calls Penannular Ring. Attached to the breaks in the circumference of the rings are gold ornamental devices. At the same time, Wood integrated rosettes of varying degrees of abstraction into brooches such as Drift, 1992, that also combined his fascination with surface and the drama of geometric definition. Hints of his earlier cages also persist in the bars that define top and bottom.

But consideration of the rosette and other architectural ornament, particularly the Victorian decorations so common in Boston, where Wood is an associate professor at the Massachusetts College of Art, led him to nineteenth century designers, who had looked to the natural world for forms. “I became very enamored of the nineteenth century positivism that says we can make an idealized form of nature in our own work,” he says. 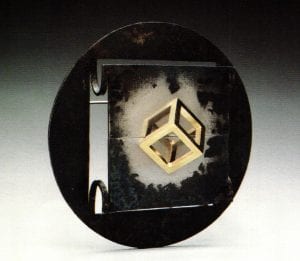 That interest became explicit in November Campaign Series, 1992, where leaf forms are inset with abstract rosettes. Perhaps as a way to emphasize the human hand, which can produce infinite repitions of a form, he cuts out a sequence of numbers (003, 004, 005, etc.) in each brooch. The cold objectification of a manufactured object neatly dampens the romanticization of the natural form.

Logically enough, producing in a series led Wood to consider the ramifications of the series in an architectural sense – as a frieze. Two groups from 1995, Scallop Brooches and Samples pick up the frieze theme and the secondary meaning of series: the progression of time. 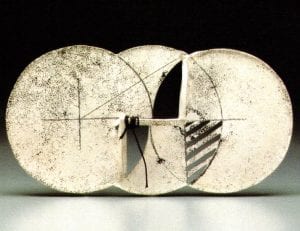 The three brooches called Samples were executed as part of a large exhibition in which artists from various media were invited to contribute their interpretations of fiber sampler tradition. Wood’s designs draw from sampler motifs, but they have been partially deconstructed as if the cloth had decayed. (The smoked oil patina furthers the effect of apparent oxidation.) Says Wood, “The idea of using silver’s properties to acknowledge the passage of time was important to me. It provided a way to dissolve sentiment.” 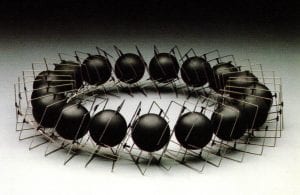 Another approach to detaching image from sentiment is to appropriate forms that have lost their emotional specificity over time. Wood did this in his most extreme exploration of ornament, a group of intensely colored enameled pieces made in 1994 and 1995 that are modeled loosely on medieval ornament. Seemingly a radical departure from the constructed nature of his earlier work, they are, in fact, a schematized extension of forms with which he has been working for several years. For example, the cutout portions from Scarlet Series, 1994, have appeared in variations going back at least to 1989, more variations on the rosette, Red Floret #2, 1995, recapitulates both the trefoil and, as the name suggests, the form of a blossom. 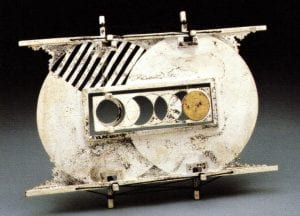 Essentially monochromatic and convex in a gently pillowed fashion, these pieces play neatly with positive and negative space, harking back in spirit if not in form to the Drawing Series, while achieving on essentially heraldic effect. Although Wood was “extremely picky” about the colors, he was more concerned with cultivating a stippled surface for the glossy enamel. “I wanted to freeze the idea of crystals melting and fusing together,” he says. So he has experimented with time and temperature to find the point at which the individual granules of colors have not quite become a single smooth surface.

The desire to incorporate the properties of his materials as an essential element in the finished work is characteristic of Wood. “When material is integrated into an application,” he explains, “it connects the object to the world. It becomes an object that is a material that is an object.” 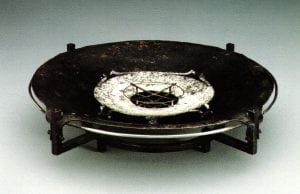 Patricia Harris and David Lyons are writers who reside in Cambridge, MA. All photographs by Dean Powell