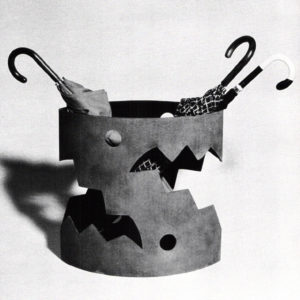 “The creative process is basically a process of focus. …If I look at things that I think are related, other work, other things in nature, things in industry, things that I think will trigger me off, feed those in, and intensely concentrate on it and do a lot of drawing in my sketchbook, the good ideas just blow in.” 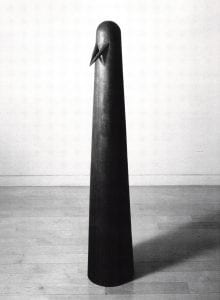 In his latest body of work, Noon Marks this transition from conceptual framework to elegant expression is beautifully manifested. Despite their austerity of form, Bonner’s Noon Marks offer the viewer a wealth of associations. They could be discussed in purely formal terms and with references as diverse as Celtic stones, commemorative monoliths, garden sun dials, and the works of contemporary sculptors. They also make a connection between art and nature, but it is nature explained by science, not a Romantic’s view.

Bonner’s intellectual starting point is “to mark the daily azimuth of the sun, when it is due south and at its highest point in the sky. When the shadow crosses the line on one day to the next day, the earth has done exactly one rotation. It indicates the solar system. It’s a representation; it’s evidence of what’s going on and I find that to be intriguing.” 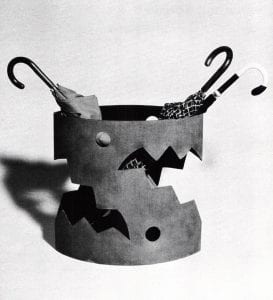 The Noon Marks interpret in tangible terms that abstract description of our world, translating the explanation of physical science into art. The rigorous mindset required of science is evidenced in the clarity of Bonner’s forms, in the reduction to the defining characteristics of a sun dial – a simple support with a marker and line. The fact that Bonner’s father is a microbiologist and his grandfather was a scientific glass blower makes this interest in the scientific seem legitimate. What Bonner has done is to marry art and science as The Providence Journal-Bulletin arts writer Bill Van Siclen noted in his review of Bonner’s 1991 mini-retrospective at the Newport, Rhode Island, Art Museum. He was responding to Bonner’s 1992 sculptures that took as their inspiration mathematics and topology, Klein bottles and Möbius strips. With his background one expects Bonner to profess a deep curiosity about such complex issues, but the reality is his curiosity is from the point of view of a form maker. Bonner says simply that he found the Klein bottle “cool”.

Named for the German mathematician Felix Klein who studied infinity, the Klein bottle can be described as a one-sided topological surface with no inside or outside. Bonner manifests it as a sphere with a hole that is a continuation of an attached U-shaped tube, making the interior surface continuous with the exterior. It is a physical representation of an abstraction and Bonner was drawn to the form before he started to explore its theoretical basis. 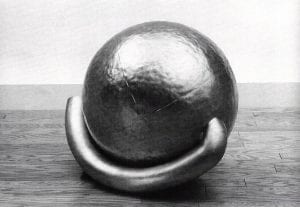 Other works in this 1992 series also illustrate this topological description. For example, Inverted Bottle is apparently a sphere pierced by a tube at one end. The tube and sphere, however, are a single surface, the tube rising from the interior as a continuation of the skin of the sphere. If one could tug on it, the sphere would, theoretically, be pulled into the tube, turned inside-out and destroyed. This possibility may not be readily apparent and for Bonner who disavows any interest in topology per se, it is the form that remains paramount. As Van Siclen writes, Bonner is “an artist whose fascination with science and mathematics is always firmly grounded in the traditions of craftsmanship and sculptural form.”

Bonner’s commitment to craftsmanship contributes to his clear articulation of form. This allegiance to meticulous execution derives from his undergraduate days at the Philadelphia College of Art. “It was a very ’60s philosophic approach, that everything was important”, explains Bonner. “The back of a brooch was just as important as the front.” 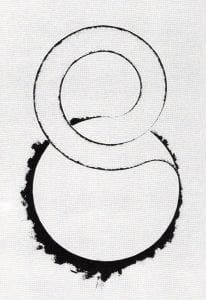 This attitude has shaped his work and perhaps rendered it unfashionable in today’s art world, something that does not concern Bonner at all. He is very persuasive in his advocacy of fine craftsmanship: “It took cons for people to figure out how to craft various different materials, how to work various different materials. In one way it’s appropriate to take advantage of that body of knowledge. The other thing is that to approach the nature of a material, the more skills you are aware of in working, the more you can take advantage of the material. To ignore it, for me, misses an opportunity. I’m not talking about overkill as in finish. What I’m trying to say, the more skills you have, the more, the wider, the better opportunity you have to get at the essence of the material.”

Metal is his material of choice, but he started his undergraduate career focusing on wood. Unlike many artists, he did not grow up knowing what he wanted to be. Bonner came to it in his late teens and at least partially because he had friends in art school. His principle teacher was Dan Jackson and he credits him with instilling a desire for perfectionism: “He demanded a lot and no matter what you did, he always wanted more. There was something about that experience that was tremendously beneficial.”

At PCA Bonner minored in metalworking with olaf Skoogfors. Skoogfors’s emphasis on the totality of design has certainly left its mark on Bonner’s work where each element is essential in both the sense of completing the whole and of being distilled to its simplest and most potent expression. In Bonner’s latest series, the Noon Marks, he has fulfilled his theoretical brief with the simplest of elements – a monolith of stone or metal with an incised line and a marker to cast the requisite shadow, as important an element as any of the tangible ones. It could not be a simpler nor more powerful physical expression.

Bonner did not focus his attention on metal until enrolling in the M.F.A. program at RlSD after completing his B.F.A. at the Philadelphia College of Art in 1971. He intended to pursue furniture making, but soon switched to metal in order to study with Jack Prip. Bonner is not inclined to wax poetic about metal as a medium, although he does admit that wood has certain limitations. “It has to be architected; you have to adhere to structure. Metal’s structure is more congruent with the way I am. It’s looser, offers more possibilities. Its appeal now is that I know it so well that I feel comfortable making work.”

An important part of Bonner’s creative process is his strategy of working in series, which he learned from Prip. After graduating from RISD with an M.F.A. in 1973, he did a number of “typical silversmithing commissions”. These included two ceremonial maces for educational institutions, but as he wryly notes “the trade in maces has fallen off considerably since the 15th century”. Beyond the fact that they did not generate further commissions, “the worst part was the work wasn’t making a progression. I would do one piece that was one thing and another piece that was another and 20 slides looked like a group show. Not that I care about that, but my work wasn’t progressing in a way that was fruitful.” He also wanted to get away from the mode of working whereby he made drawings to be approved by the client and then executed the piece exactly. He “bagged it” and started a series of pieces where he just cut the metal, making the work more material-oriented and spontaneous.

Even though he eschewed notoriety, by the beginning of the 1980s he found himself showing in galleries. This was also the beginning of his well-received weathervane series of which he has made approximately 200. Like all of his work, even the most overtly sculptural, there is an element of function to the form. The first weathervane came about because his father had one on his shed that needed to be repaired. Bonner who had been interested in the format made him a new one. As with the Noon Marks, all of the weathervanes can function, but as Bonner says, “Nobody who bought the weathervanes cared which way the wind was blowing, but they do tell you which way the wind is blowing”. 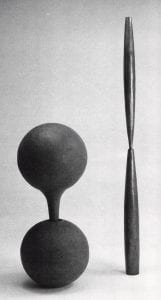 The idea of function does indeed underlie Bonner’s work in an almost seditious manner. Even in his topologically inspired sculptures of 1992, the critic Eleanor Heartney espies it as an underlying concern: “No longer actually functional, his works instead investigate the idea of functionalism through reference to objects whose forms have taken shape under the logic of a specific purpose.” Bonner isn’t interested in a Romantic view of function, recalling the decorative arts heritage, or appropriating forms. Rather he distills the concept and expresses it in equally reductivist formal terms.

His vessels of the early 1990s fulfilled the basic requirements of a vessel by containing space and having an access point even though their forms were initially read as purely sculptural. In House Cat the viewer perceives the object as an archetypal house form. By painting it in orange tiger stripes, the chimney turns into a tail and the peaked roof into an arched back. This touch of whimsy is not uncommon in Bonner’s oeuvre. Early on there were umbrella stands of comically menacing, open-jawed sharks and crocodile candle sticks, but the humor derived from Bonner’s interest in the essential form, which is the basis for caricature as well as a hallmark of Bonner’s career.

There are other points of view for Bonner’s aesthetic explorations, for his series of series. They can be seen as an expression of material and technique. They can be discussed in light of their theoretical and visual sources. And there is the humor with which Bonner endows even his most abstract and serious work i.e.: Five Bottles from 1991, with its allusion to Brancusi’s Endless Column, is not devoid of humor. Regardless of the point of view, the forms themselves always demand our intellectual attention as well as eliciting a more emotional response. This is where Bonner excels, endowing his simple, elegant, skillfully crafted forms with enough content to induce contentment in the mind and eye of the beholder, regardless of their focus.

Karen Chambers is a writer on art and craft who lives in New York, NY.

All articles by this author
Previous Bettina Dittlmann: Power of Subtlety
Next Studio Multiples/Portfolio
Social media