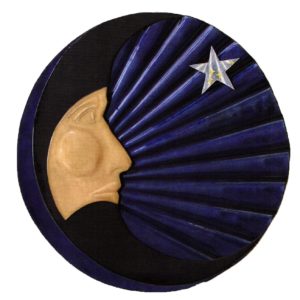 The Enamelware of John Smith

His background is in large scale metal work. He has worked more than 30 years creating and marketing diverse metal pieces nationally and internationally. He is best known for meticulously crafted knives.

John has been a dedicated conservationist of resources for decades. In 1972, he and two other friends started a recycling center in Charleston, Illinois, ‘The Great Leftover Plate ‘ which served the community for several years. Since then, John has recycled, repurposed and reused everyday materials and items as part of a lifetime commitment to responsible living.

When the opportunity arose to provide work for an Art Show at Kaskaskia College, it was natural for John to incorporate salvaged materials and objects into his pieces. The repurposed items are easy enough to identify and lend an element of whimsy to the work in some pieces and a bit of anxiety to others. Recycled copper sheet was reused as foundation material for the application of vitreous enamel. The body of work displays enthusiasm and energy. It is obvious that John had a lot of fun building the work for this show.

For this exhibition many of his works were based on the theme of “Man in the Moon” and others were realistic sculptural representations of exquisitely executed copper roses.

“Man in the Moon”

“When I started out to build the pieces for this show, I began making various images of the man in the moon that most all would recognize. The challenge was, simply put, to create an image in a more or less, three dimensional manner. As I worked along from piece to piece, things changed, though I did not consciously seek the changing.

What began as straightforward presentations of images became expressions of emotion and ideas or concepts, and gained energy one to the next. After months of work, and nearing an end, it occurs to me that we of the earth have for all time (up to now)looked at the moon in the night sky and placed it into one context or another without actually effecting much of a change of the moon itself, “one small step for man” notwithstanding.

Soon, clearly within our lifetime , mankind will attempt to colonize the face of the moon itself, and forever alter its appearance by that act. It will be a revisiting of our human nature extended beyond earthly bounds. It is in my mind, inevitable. The moon in the night sky will never be viewed as we view it now, but will always show the fingerprint of mankind upon its face.

The newer pieces reflect thoughts and emotions about the coming encroachment. It is my hope that the work as a whole will help raise awareness of the impacts of our human activity. The immutable night sky is about to be changed by the hand of man.”

Striving to create a rose that more successfully imitates the natural beauty of a blossom, John forms, forges and textures copper sheet, coaxing each piece to join with the others to make blooms and leaves that will try to convince you a natural flower has been dipped in molten copper. But beware, the attending thorns are every bit as threatening as those on a freshly cut long stemmed rose. With the skilled application of heat, the copper bloom takes on the blush of red that will further augment the appearance of the
natural flower.