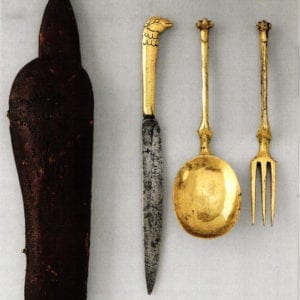 Cutlery: A Matter of Taste

Eating and drinking have been part of life forever. And people have always striven to make something special out of this necessity. This included how and with whom one ate. The development of the tools of eating followed along with the refinement of customs. 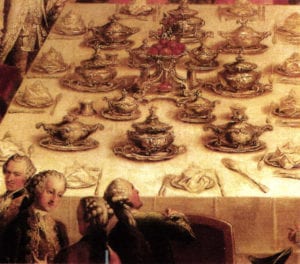 Martin van Meytens (1695-1770), banquet in the Römer in Frankfurt, Germany, on the occassion of the election of the King of Rome, the future Emperor of the Holy Roman Empire, Joseph II, in 1764 (detail), Schönbrunn Castle, Vienna, Austria 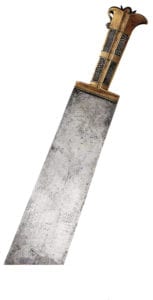 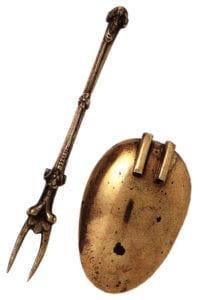 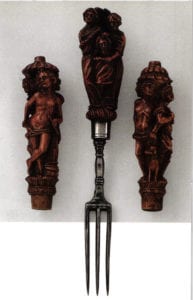 It began with rather more modest utensils. Even the cultured Romans brought solid foods to their mouths with their hands. Fine manners meant not wiping ones fingers on one’s clothes or on the tablecloth, but rather on napkins. It was not uncommon to see the leaders of the ancient economy using napkins made of valuable gold materials. The “feast emperor” Heliogabel even had napkins decorated with artists’ paintings. No wonder that every now and then one of the notables gave in to temptation and took a napkin along as a souvenir. 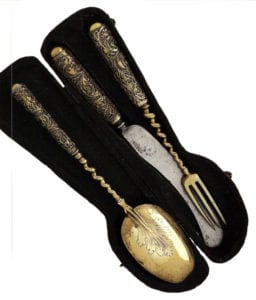 Many a Roman would certainly have wrinkled his nose at the rough table manners of the Middle Ages. Minstrels who otherwise inhabited higher spheres used their neighbors’ spoons and tossed gnawed bones into a common bowl instead of throwing them under the table as the elegant custom dictated. Only on feast days the oak tables were covered with low-hanging cloths that were used to wipe greasy hands throughout the meal. Before and after the meal, noble youths nevertheless brought hand towels and water. 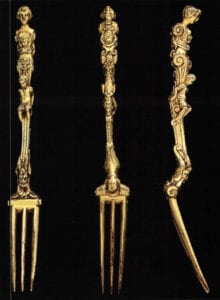 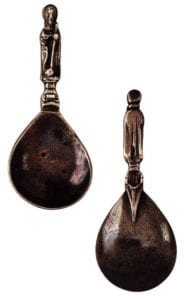 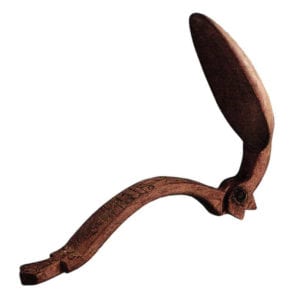 Diners in the courtly age had to be satisfied for a long time with just spoons and knives, which they also brought along with them. At the belt hung a sheath containing one’s knife, the function of which gives us the word “cutlery.” At the tables of simple folk there were only two or three knives in all, and those sharing the meal also found themselves taking turns to slice off a piece of roast. The use of the table knife began to spread at the end of the 16th century. From then on, elegant houses offered each guest a knife with his or her meal. The fork made its appearance on the scene relatively late. As legend has it, a first timid attempt to introduce the fork was made in the 11th century by a Byzantine princess who went to Venice as the wife of the doge, bringing this table custom along with her to the canal city. These particular utensils bore little resemblance to our forks, however. Used in the Near East since as long ago as the 7th century, they were sharp, two-pronged carving skewers that held pieces of meat more securely than the sharp knives that had earlier been used The Venetians used the new utensil to advantage when eating blackberries, raspberries, and cherries, because they did not want to stain their fingers. 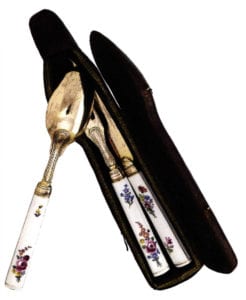 Another legend of the origin of the fork has it that one of the dukes of Naples had one made on the model of the pitchfork, so that he would not have to eat his pasta with his fingers. 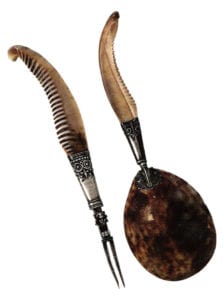 One thing is certain: the fork accompanied Catherine de Medici from Italy to the court of her husband, Henry II, in France. The nobles were, however, embarrassed to the core by their use of the pronged instrument. Because they could not learn to use it properly, they lost half their food halfway to their mouths. 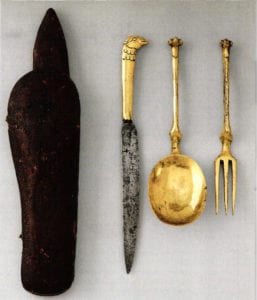 No wonder that even the reformer Martin Luther sighed, “God protect me from forks.” The Church denounced the fork as a devil’s claw, and in the British army, it was despised as an unmanly eating utensil right up until 1897. 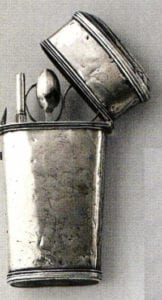 What we now understand to be “cutlery” meaning the unified set of knife, fork, and spoon, all designed to go together, first became known in the beginning of the 17th century. Together with the nightshirt and the handkerchief, the place setting is one of the three accomplishments of bourgeois society. In the course of the eras that followed, cutlery takes on a variety of forms, attaining an artistic and aesthetic high point in the 18th century, in the Late Baroque and Rococo periods.

Many traditional cutlery sets have richly ornamented handles. There is hardly any material that has not been drawn upon for cutlery over the course of the past few centuries: gold, silver, enamel, amber, precious stones, rock crystal, marble, cactus wood, ivory mother-of-pearl, glass, coral, horn, plastic, porcelain, tin, and even iron, refined by artistic engraving and metal inlay. A history of taste and artistic trends is clearly visible here. A history that is continually being written anew and always leads to new, fascinating designs.

Whether the style is old or new, a treat for the eye as well as the palate. Precious and originally designed cutlery also conjures up joie de vivre and enjoyment of life. Baron Vaerst, who in the 19th century composed one of the wittiest cookbooks in the German language, commented, “A gourmand often spoils his appetite, but a gourmet enjoys foods and table with all the senses.” 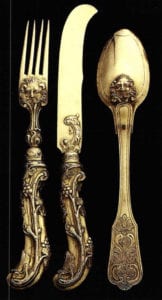 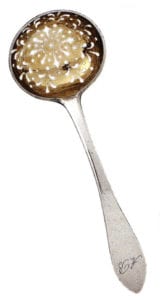 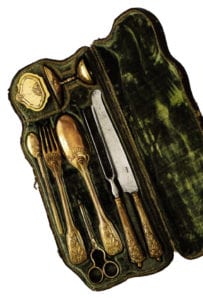