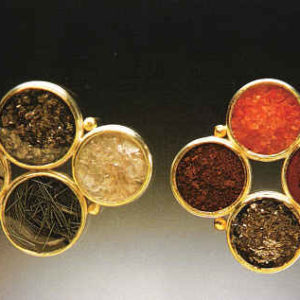 The Work of Jennifer Trask

by Patricia Harris and David Lyon

Jennifer Trask sometimes seems to approach jewelry like a natural historian, filling locket-sized, glass topped silver and gold cases with specimens isolated from the world around her. She likens herself to a Victorian taxonomist, and a whiff of the musty museum case does attend her forms. She affirms the association by inscribing the backs of the cases with the common and scientific names of the objects within.

But Trask borrows the formal accoutrements of taxonomy to achieve a far subtler artistic effect. By definition taxonomy is a reductive science. Once an object or an experience has been named and categorized, it loses its individuality and becomes merely part of a larger structure. The taxonomist plays the role of the Biblical Adam, who asserted his dominion over all the animals by giving them their names. In contrast, Trask’s art derives its tension from juxtaposing her meticulous presentation with a sheer wonderment at what’s inside those perfect little cases.

By isolating objects under glass, Trask transforms the mundane into an object of adoration by focusing on color and form. She sets the iridescent carcasses of Japanese beetles into gold as if they were cabochon gems An entomologist would mount the beetles as type specimens; Trask bids us to marvel at the transubstantiation from scourge into splendor.

Contrary to the distance between observer and observed that is the bedrock of Victorian science. Trask’s jewelry invites intimacy and complicity. The scale and shape of the cases in each piece deliberately invoke the jeweler’s tradition of the locket. Made of precious metals, the pieces are meant to be handled or worn on the finger, around the neck, pinned over the heart. They are vital and personal-always right next to the pulse.

Unlike traditional lockets, Trask’s constructions reveal rather than conceal their contents. Some of her bestknown pieces contain rare earths sold as painter’s pigments, and Trask employs that sheer color to marvelous effect in bracelets, necklaces, and rings. The sifting powder within each receptacle provides a texture every bit as pleasing as the refractions of a gemstone. She treats the earths as precious, and they become precious as a result. Far from the Apollonian impulse for order Trask’s enthusiasm evokes a Dionysian impulse to joy.

Her ability to balance the analytical and the celebratory enables Trask to find unexpected beauty, even in conventionally pretty objects such as peacock feathers. In her Pavo series, she dissects the iridescent feathers into their constituent forms, each presented in a manner that calls attention to its abstract beauty. She encases a loose jumble of unfurled feathers beneath a glass bezel and says, in effect: “Behold the potential wonder.” In another piece, she selects just a slice of me feather and twists it in a spiral – a sword – which evokes the magnificence of the whole structure.

Trask’s recent wall pieces, which integrate brooches into mounts, delightfully subvert her taxonomic impulses through sheer sensuality Perhaps one of the purest examples of this process centers on the delicate gleaming lace of katydid wings mounted beneath a magnifying glass. The jumble of structures belies its rationalist presentation. Unlike the taxonomist, who consigns the wonders of the world to their appropriate drawers and shelves Trask holds them up for all to see. Here, she seems to say, is the end point of all contemplation: to come face to face with the world in miniature.