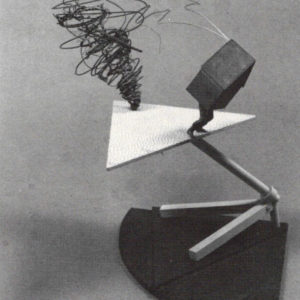 This show provided an overview of some of the new directions and esthetic concerns of metalsmiths in the 1980s. Curated by Janice Kluge, it included approximately 50 small metal sculptures and pieces of jewelry by 18 artists from throughout the United States, most of whom teach metalwork in university art departments. As this exhibition clearly demonstrated, in the domain of metalwork it is not possible to separate “art” from “craft.”

Although the metalwork on display was extremely diverse in both its technical and esthetic approaches, a number of general tendencies could be observed. Art of the 1980s is frequently characterized as eclectic, and this was certainly true of the work in the show. Today’s metalsmith still values fine workmanship and traditional forms and methods, but is also willing to take chances, such as combining plastic with metal or exploring titanium coloration. Also evident is an interest in Post Modern color. Although some of the work in the exhibition was abstract, the majority of the pieces were figurative, often with autobiographical allusions or references to nature. This, along with an emphasis upon individual style, is in keeping with today’s art trends, which include a concern with the decorative and a return to narrative and expressionistic imagery.

Christine Clark’s mixed-media pieces were among the most unusual and least traditional works in the show. That Shrine Out There, What’s It For? posed a riddle for the viewer. A shrine usually contains something sacred, but in this case it sheltered a transparent plastic pillow filled with metal shavings topped by a tiny metallic fish. The colorful cutout plastic shapes had a childlike simplicity, but the treatment of color and surfaces was highly sophisticated. <div class="adframe"> <div class="adframe300x250"> <div class="adframe300x250label"> <i class="fa fa-gem icon"></i> Ganoksin is sponsored by</div> <center> <div id='div-gpt-ad-1479837244275-0' class="ad-item" style='height:250px;'> <script> googletag.cmd.push(function () { googletag.defineSlot('/87578358/ganoksin-paragraph-1', [ 300, 250 ], 'div-gpt-ad-1479837244275-0').setTargeting("topicid", ['behind-the-design', 'jewelry-design', 'business-and-marketing', 'exhibition']).addService(googletag.pubads()); googletag.pubads().setCentering(true); googletag.pubads().enableSingleRequest(); googletag.enableServices(); googletag.display('div-gpt-ad-1479837244275-0'); }); </script> </div> </center> </div> </div> 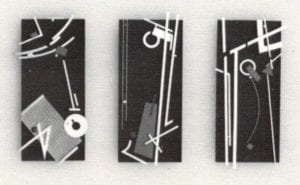 Stuart Giles’s Struck by a Storm combined steel, copper and found objects in a bitingly humorous piece. The little house with feet which always ends up in precarious situations is a self-portrait of the artist. In this case the steadfast little house confronted a sinister tornado of coiled wire. Also highly personal in imagery were the works by Holly Cohn, such as Lost Secrets which featured photoetched portraits of herself in a spatially expansive house. The photoetching process developed for metalwork by Eleanor Moty has been taken up by her students Holly Cohn and Martha Glowacki.

Linda Threadgill also used photoetching in works such as Shutters, a wall relief which seemed to unfold like a book. She has created a fascinating range of textures using silver, brass and wood. By spraying acid on thin sheets of metal she has been able to simulate the diaphanous effect of falling leaves. Kate Wagle’s gleaming blue 3D B. C. soared in space, suggesting a bird in flight or a phoenix rising from the flames. Wagle has opted to work on a monumental scale and to incorporate modern materials like auto-body paint and glitter. However, here the reflective blue surface was reminiscent of traditional enamel work. The form itself was dynamic and sleekly modern. Although Thelma Coles’s Confinement Denied and Mutual Dependency employed a modified cubist vocabulary, their titles had human references. In Confinement Denied the artist experimented with the relationships of planes and lines in space, contrasting the highly polished metallic surfaces with the irregular soldered silver wire fringe at the top. 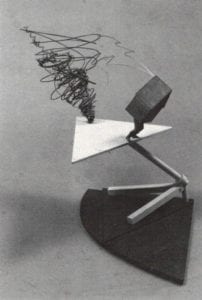 The jewelry in the show was extremely varied, ranging from the constantly changing colored surfaces of Edward DeLarge’s titanium pieces to the machine-age esthetic of Susan Hamlet’s plastic and metal jewelry. Edward DeLarge introduced titanium coloration to the United States where it has become popular in the last five years or so. DeLarge’s absolute mastery of the technique permits him to create painterly effects such as the “titanium landscape” on one of his necklaces. While the flat, stylized shape of his Banana Torque referred to earlier jewelry the piece was modern in its use of titanium and humor. Sarah Nelson colors titanium in a more stylized and less painterly manner than Edward DeLarge and experimented with folding metal in Wishing. Much of the jewelry, like the sculpture in this show, involved mixed media. Robert McCall’s glittery brooches were built up like cubist collages. Susan Hamlet’s plastic and metal pieces had an Art Deco simplicity and a classical feel despite their machine esthetic. Bruce Metcalf’s Lunette Stickpen with Beans and Knives used food imagery and rapid unexplained changes in scale to capture the viewer’s attention in a post-Pop idiom.

The National Invitational Metalwork exhibition in Birmingham displayed a refreshing diversity and a richness of personal imagery and style. The uniformly fine craftsmanship and varied techniques demonstrated that metalworking is alive and well in art departments across the United States. Other artists included in the show were: Fred Fenster, Gary Griffin, Munya Avigail Upin, and Linda Watson-Abbott.