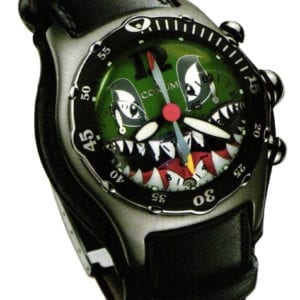 The latest watch and design trends in 2004 make it obvious that the trend is going towards larger casing sizes and more colors while especially integrating motifs into design of the face and the watch straps. 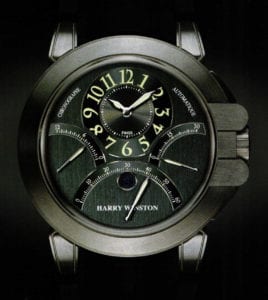 Radically new design – The new Project Z1 presented by Harry Winston in spring of 2004 was three world premiers in one: the material, the clockwork and a radically new design. They chose zalium as the new material that was previously used in aviation and space technology. The clockwork dazzles you with its eccentric triretrograde display with a chrono-second at six o’clock, 30-minute counter at four o’clock and 12-hour counter at eight o’clock. The Project Z1 casing shows a fresh face even though you can’t miss the design feature of Harry Winston’s watches, namely the popular rounded arches and the strap joints. However, the designer shifted it so that it forms the crown protection with Project 1. www.harry-winston.com 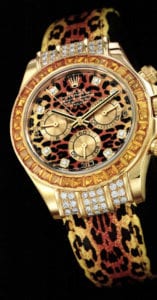 Design elements from nature – Thanks to an imaginative exotic aura, a legendary classic of the art of watchmaking is experiencing an exciting change. It’s no holds barred for the Cosmograph Daytona from Rolex because the Daytona Leopard model is studded with diamonds and yellow sapphires. www.rolex.com

Ganoksin is sponsored by
Design elements from nature – Thanks to an imaginative exotic aura, a legendary classic of the art of watchmaking is experiencing an exciting change. It’s no holds barred for the Cosmograph Daytona from Rolex because the Daytona Leopard model is studded with diamonds and yellow sapphires. www.rolex.com

Optimism and joie de vivre are the key words for the summer fashion season of 2004. Fresh and brilliant colors, opulent prints, lightweight fabrics, vibrant cuts and athletic themes are dominating fashion these days. And the watch collections in the lower and medium price categories are following this fresh summer breeze. While fashion is picking up very directly on the quartz models with its stylish seasonal watches, it’s the high standards of workmanship and aesthetics that figure prominently with the mechanical watches. All qualities of watches vary in material, clockwork and the straps as a fashion topic. For instance, men covet mechanical watches that exhibit engineering excellence and feelings while the watch collections for ladies put their faith in elegant colors and designs. Watches with large straps are continuing to lead the way while functions are becoming increasingly important, making the casings larger and higher. As much as 50 mm diameters catch your eye while offering space for additional functions and details. Circular casing designs, such as circular on the inside and slightly beveled on the outside (or vice versa), are being formally reinterpreted, although rectangular watches are also keeping ahead of things. 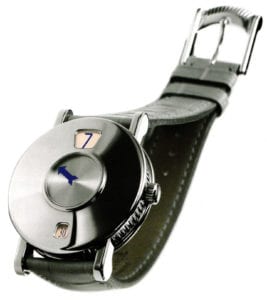 Design without hands – The jumping hours of Goldpfeil Genève shows time in a new light. Instead of the conventional hour and minute hands circling around the face along the minutes, a window at 12 o’clock here shows the current hour and a second at 6 o’clock the date while a rotating circular disc shows the present minute with the blue Goldpfeil logo. The upper side of the casings made of solid gold replaces the conventional face in this subtle play of geometric shapes with symmetry. www.goldpfeil.com 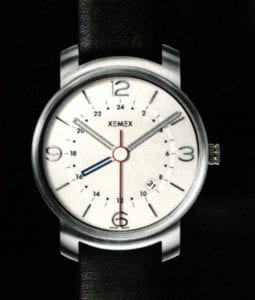 Reductionist design – The Xemex Piccadilly GMT dazzles you with its independent design reduced to the essential elements. The second time-zone and the data display at 4:30 are harmoniously integrated into the watch design. www.xemex.ch

Ganoksin is sponsored by
Reductionist design – The Xemex Piccadilly GMT dazzles you with its independent design reduced to the essential elements. The second time-zone and the data display at 4:30 are harmoniously integrated into the watch design. www.xemex.ch 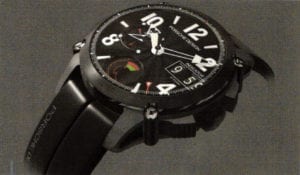 Design elements from Porsche GT – The Porsche Design Indicator is painstakingly designed watch that links chronograph functions for the first time with a purely mechanical digital display. The design of this extraordinary watch takes its cue from a number of elements of Porsche GT, one of the most expensive series production cars in the world. www.porsche-design.com 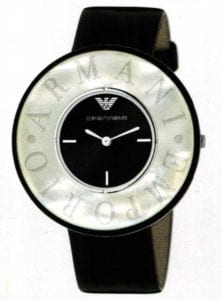 Mother-of-pearl is in – The new AR 1300 from Emporio Armani model shows that vintage styles have a distinct influence on its design with a strong feeling by the circular mother-of-pearl colored stainless steel casing that has embossed label lettering on the front and back side. www.emporioarmani.com

Classical shapes that radiate elegance are coming to the fore in this season. For instance, we notice a return to the purist design of the 50’s with a lot of brands. The watch strap trend is obviously heading towards the leather strap since it appears in a variety of widths, colors and shapes. But caoutchouc is also a favorite. Women’s watches continue to be big, but their aura (like fashion) is becoming increasingly feminine. Cheerful colors on faces, hands, numerals, push pieces and straps are a hot item especially with women’s watches: blue and pastel tones are up and coming instead of shrill colors. 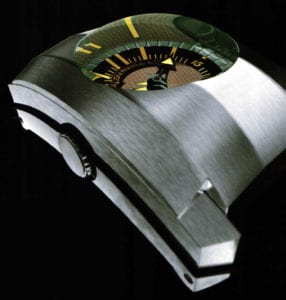 Sliding push pieces – A brand-new watch collection with an innovative design and function by Alfred Dunhill was presented at the Salon International de Haute Horlogerie 2004 in Geneva. This watch was created by Tom Bolt who was able to create his first collection for Dunhill with his longstanding experience and knowledge of the art of watchmaking. The Dunhill Bobby Finder SP30 choronograph with a tachometer function has a revolutionary sliding lunette that draws in the chronograph push piece when you turn it. www.dunhill.com 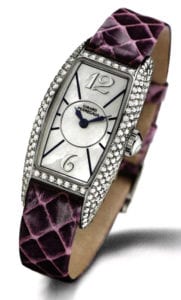 Sophistication in motion – Girard-Perregaux’ elegant lady’s model Baguette diamonds plays a clever trick on time. As always with Girard-Perregaux, sophistication in motion with its subtle aura of nostalgia is underscored by the long casing horns that give the entire creation more dynamism. The white gold casing bedecks itself with a diamond-studded lunette or two rows of diamonds, although versions without precious stones or with diamond pave are also available. www.girard-perregaux.com 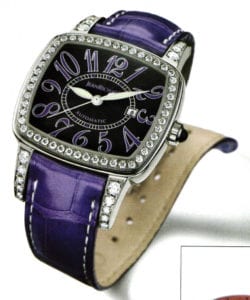 Ganoksin is sponsored by
Strong and permanent identity – Elegant and seductive, Jean Richard TV Screen Milady is a symbol of femininity. The Jean Richard model is produced according to the purest watchmaker tradition to appeal to women who feel good about the time they live in and are open for a daring creation as an expression of a strong and permanent identity. www.jeanrichard.com 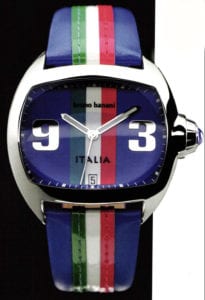 Strong brings people together – 2004 is the Year of the Nations and major athletic events. Portugal will not only be hosting the much coveted European Football Championships, but the Olympic Games will be returning to their birthplace and renaissance in 2004: Athens in Greece. That’s the reason why Bruno banana is declaring 2004 the Year of the Flags. This cult brand will be presenting their successfully launched Magic Union Jack along with three other symbolic representatives of the latest flag series: Magic, USA Türkiye and Magic Italia. www.bruno-banani.de 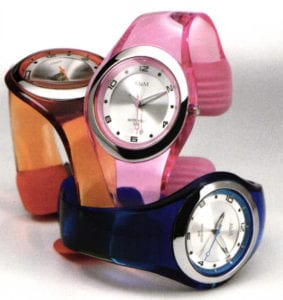 Colorful transparency – The hallmark of M&M’s new clasp watch is transparency and color. Radiant watch straps have been one of its foremost design features for a long period, however linking it to transparency gives this model its own special appearance. www.mumuhren.de 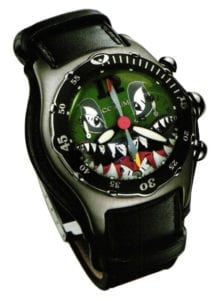 Oh, that shark has pretty whites, dear – The new Bubble Dive Bomber watch model from Corum is dedicated to everyone who belonged to the  legendary Flying Tigers at the beginning of the 40’s – one of the most glorious volunteer combat units and a legend in the history of flying. The special symbol of these models is faces with a drawing of a shark’s mouth or the head of a tiger. www.corum.ch