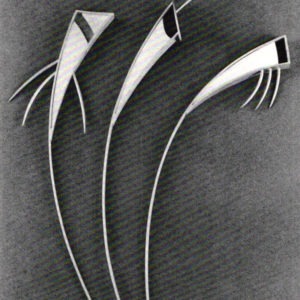 Projects of Exploration: The Art and Science of Line

This is the third in a series of projects for students, created to provide a forum in Metalsmith for provocative and innovative work. We determined that a problem-and-solution approach would be fair and open, encouraging creativity and exploration.

The projects will be assigned by a different professor each time. In this way, we hope to spotlight issues in all areas of metalwork, from sculpture to body adornment, from scale to preciousness.

This third project was assigned by Billie Jean Theide, Professor in Art and Design and Co-Director of the Metals Program at the University of Illinois at Urbana-Champaign. 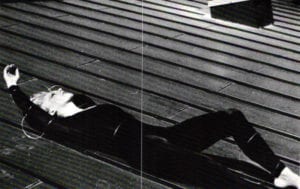 The problem was line, the elementary means of visual communication, used subjectively to suggest or describe distinct expressive and emotional states. Her commentary accompanies the work she has chosen as most successful.

Information on the assignment for the next project appears at the end of the article.

The Greeks (640 B.C. to 100 A.D.) introduced the earliest systematic method used in the study of geometry. They acknowledged the beauty of geometry as a discipline with a structure and understood that the proof of a formula was more exciting than the discovery of a practical application. The monumental work of Euclid in 300 B.C. collected and systematized all previously created geometry. Euclid set out to make definitions, and, in doing so, compiled a set of statements to be accepted as “true.” From these, all theorems were deduced as logical consequences.

For centuries commentators, both critics and defenders, have discussed and argued Euclid’s “Definitions.” Defenders of Euclid contend that he did not intend statements 1 and 2 to be definitions but was merely pointing out the abstract, nonspatial characteristics of the system. If so—if Euclid did not intend to define point and line—then he is in this respect a contemporary. Today point and line are viewed as primitive or undefined words—those from which all other words in the system are defined.

Point and line do not exist in the real world—line can only be approximated, for example, by a length of rope or wire, or the mark made by a tool. The concept of line, however, can be applied and used in a practical sense without the knowledge of its supporting formal analytical system, For example, in the ancient pre-Greek development of geometry, the ancient Babylonians and Egyptians knew geometry well—their applications involved measurement, particularly earth measure. They understood the properties of the right triangle to the extent that a knotted rope held tightly by three men formed one. They used this and other geometric realities to survey their lands and to construct the pyramids.

Just as early civilization used devices without the knowledge of formal and analytical reasonings, so does the contemporary artist. Visual artists use the concept of line without attributing its basis to Euclidean geometry; line remains a primitive word, which is interpreted in numerous ways. The richness and excitement in an expression depends in part upon a variety of meanings inherent in visuals as well as upon the vagueness and ambiguities of the ideas expressed. 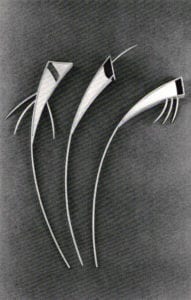 The work submitted for this problem exhibits widely differing approaches and conclusions—only one, however, addresses the true character of line and that is the work of Linda Oliver-Matt called Structural Bodies. The minimal linear elements (wire) extend the natural curves of the human form—addressing pans of the body seldom dealt with. These wire elements also extend to the linear elements of the architectural environment (building wails, roofing and plumbing elements). Jewelry is no longer additive but pan of a total visual environment. The others are presented here because I find the diversity rewarding.

In Denise Seif’s pin series For Better Reception, there is a reference made to the Russian avant-garde, specifically the two-dimensional works of Kasimir Malevich. Her controlled, planar assemblages are in the constructivist style, and abstraction, precision and regularity dominate.

In contrast is the work of Nancy Montgomery. Her planar brooch titled Blue Figure begins to address the idea of narrative through representation. Restrained facial features, motionless gesture and repressed posture, in addition to the simple, straightforward use of material and technique invite contemplation.

Line is an abstraction, manipulated and developed by man as an agent for the simplification of statements of visual fact and for symbolizing graphic ideas. Its importance stems from our tendency to want to make order out of chaos and our desire to order ideas and emotions to reflect intentions. As have scientists, artists have attempted to isolate and define such terms. Yet, we should not forget, in our isolation, that Euclid also said, “The whole is greater than the sum of the parts.”

Project: To create a pair of earrings that do not match but that complement each other when worn together. Each should be a strong enough idea visually to be worn independently. One should be obviously more major than the other. Each should address the problem of visual intricacy.

Avoid anything that reflects current design clichés endemic of Seventh Avenue fashion-jewelry preoccupations, Memphis/New Wave idioms or the Paloma Picasso/Big Rock complex. Strive to make a personal contemporary statement that can become an heirloom—a pair of earrings, which, when worn singly or together, becomes the major jewelry of the wearer.

Deadline for submission is April 1, 1988: Students must be currently enrolled in a metals program at the undergraduate or graduate level. Black-and-white photographs and/or 35mm slides documenting the work should be forwarded to:

IMPORTANT: Photographs are critical to the success of your work in print. Please pay attention to lighting, composition, focus and background color.

Ganoksin is sponsored by
IMPORTANT: Photographs are critical to the success of your work in print. Please pay attention to lighting, composition, focus and background color.

All articles by this author
Previous Mark Jordan: Hero with a Thousand Eyes
Next Heat-Induced Web Textures on Anodized Aluminum
Social media