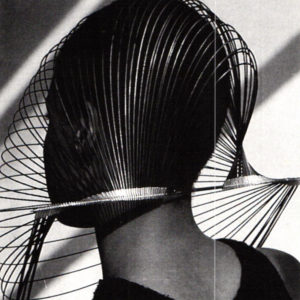 Home » Learning Center » Jewelry Design » Behind the Design » Projects of Exploration: Performance and Beyond

Projects of Exploration: Performance and Beyond

This is the second in a series of projects for students, created to provide a forum in Metalsmith for provocative and innovative work. We determined that a problem-and-solution approach would be fair and open, encouraging creativity and exploration.

The projects will be assigned by a different professor each time. In this way, we hope to spotlight issues in all areas of metalwork, from sculpture to body adornment, from scale to preciousness.

Information on the assignment for the next project appears at the end of the article.

Project 2: Performance and Beyond

This second project as assigned by Sharon Church, Head, Crafts Department, Philadelphia College of Art, is on ornament that fully engages the space around the body, amplifying movement, perhaps even altering one’s perception of the human form. Her commentary accompanies the work shown here. Information on the assignment for the next project appears at the end of the article. 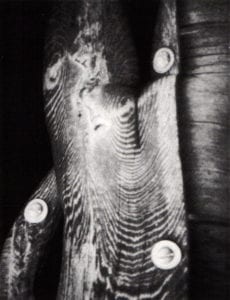 Body ornament that extends beyond the purview of traditional jewelry design—it is a subject that reaches into performance, theater, costume and image-making. While the concept is not novel—centuries of artists have regarded the body as a vehicle for both social and personal expression—never before has the individual artist enjoyed such ready access to information concerning cultures spanning thousands of years and the myriad ways they chose to clothe and adorn the body. The decade of the 60’s brought conceptual an, followed by performance in the 70’s, and, most recently, a pluralist approach has made an impact on every medium. AII of this has affected the young artist; thus it is not surprising to find today’s student of jewelry and metalsmithing taking a fresh look at the issues of Body Art and Body Adornment.

Traditionally, student work has contained the seeds of things to come. Work elicited by this project clearly demonstrates widespread interest in performance and in stretching our contemporary understanding of body ornament. Symbol and metaphor are being used as effective devices to convey concept, often seen in the context of theater or dance. Many of these works impart character or personality to the wearer—transforming, enhancing, disguising. Much of this work strives to go beyond the frivolity of ornament to say something profound about the human condition. It seeks to provoke, and it succeeds. 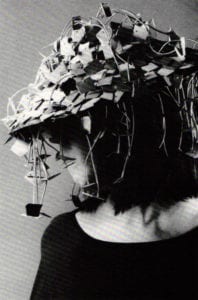 Susan Clark’s photographic image projected onto the human form reveals or camouflages the body, symbolizing the psychological and emotional being within. The act of projection promotes a duality that is both real and metaphorical; the tattoolike image can be seen as applied, or as emanating from the personality within. The twining of leaves around the skull of Brita Saunder’s Options bracelet symbolizes life surrounding and embracing death. In performance, the bracelet’s relationship to the wearer(s) asks, “Can we dream each other into an embrace?”, evoking thoughts of sleeping, waking life and death. The poem, performers and piece move together through time and space in poignant conveyance of the artist’s vision.

It is gratifying to see Ann Ackerman explore several differing approaches to a single concept throughout her Burdens series. In Paper Burden, the artist relies on performance and the photographic image to convey the impact of the piece, while in Burdens of the Past, Present and Future she works within a much more traditional format of sculpture and base, or mannequin and ornament. The one is ephemeral, the other durable, having a life that extends beyond the theatrical moment. 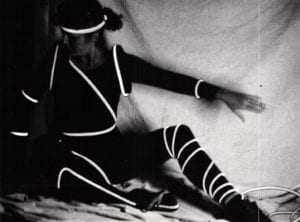 Suzanne Stokes’s piece entitled Death pays homage to Gijs Bakker’s Embracement Necklace of 1982, but in format only. Instead of Bakker’s gentle enclosure, here we are confronted with the menace and despair more closely associated with the forms of Bruce Metcalf. The piece stands out in its dimensional reality as it encircles the body, and though it configuration portends doom, the threatening arms give the wearer plenty of room.

Mark Alderete’s series of minimal caricatures gives us bittersweet insight to our social behavior. He is succinctly inventive in his choice of material and resolution; common household objects force the wearer into a state that we recognize as unnatural and uncomfortable, quietly but sadly familiar. In contrast to this stripped-down version of ornament is Dee Fontans’s boisterous, flirty party hat. She brings instant personality to the wearer through a fiesta motif that is almost baroque with its layerings and drippings of basic color and simple form. There in no subtlety here, but rather a celebration the wearer cannot avoid. 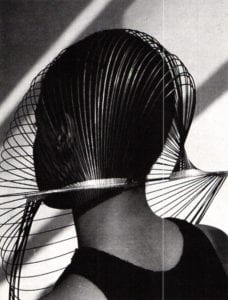 Marianne Coutu’s Colour Flow sets up a dichotomy where fluorescent tubing mandates the body as its support, while the seemingly carefree arrangement of glowing linear elements has little to do with human skeletal form. The body becomes ghost-like—a disjointed vehicle for an unearthly show. This piece begs to be seen in motion.

Fortunately, the photograph of Anne Peter’s costume for the character Anima eloquently demonstrates the interrelationship that can exist between the moving body and its ornament. Here the dancer’s entire physical gesture is at one with the sweep of swirling plastic, complementing her character of idealized femininity. In an entirely different way, the relationship developed between body and ornament in Missy Chang’s hat is equally dependent, where her hair is requisite to the finished piece. Like Mark Alderete and Susan Clark, each of these three artists has designed ornament that is lifeless or meaningless when separated from the body, making performance or photography integral to the work. 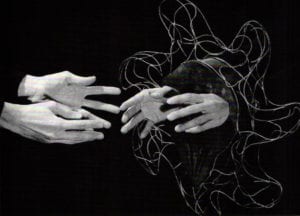 NoAm Ben-Jacov’s work modularly veils the face with a series of slats and wires, referencing at once European armor and the striated bronze heads of the Ife. These pieces seem to effortlessly combine the coolness of the technical age with the sensibilities of a primitive culture. To me, they bespeak our society’s psychological yearning for protection in a most elegant and restrained manner.

Darrin Morrison’s Untitled neckpiece, with its test tubes, stark naked tree branches and bracelike, birch bark collar, summons a flood of associations, while the dreamlike stance of the wearer flatly denies the presence of the piece. It is a fantastic vision that brings to mind the fragility of our environment, or a 20th-century Daphne as she flees from her pursuer. Even in the title, the artist gives us no definite direction. It is mysterious in its ambiguity and fascinating in relation to the human form. 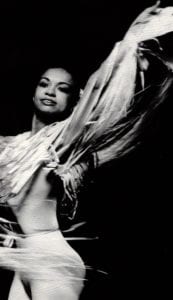 Going through the many excellent submissions to this project, the enthusiasm of the response poses many questions: Does this work have a life beyond academia, or does it remain an exercise? Is there a public for it, and, if so, how will it be found? There is no doubt in my mind that this is important work. As these students leave their respective programs to enter the profession, how will this art develop? The current work is full of promise, but will these artists pursue it, and will a place evolve for them within the field of jewelry and metalsmithing?

The third project is presented by Billie Jean Theide, Professor in Art and Design and Co-Director of the Metals Program at the University of Illinois.

Line, the elementary means of visual communication, used subjectively may suggest or describe distinctive expressive and emotional states. The importance of line, therefore, lies not only in its ability to convey or describe a specific form but in its very quality to express or arouse a mood, an emotion or to create an impression.

Using predominately line, exploit its expressive qualities. The resulting work may be a wearable, a utilitarian object, a sculptural form, an environmental piece or a performance. All media and techniques are acceptable.

Deadline for submission is June 1, 1987. Students must be currently enrolled in a metals program at the undergraduate or graduate level. Black-and-white photographs and/or 35mm color slides documenting the work should be forwarded to: Professor Billie Jean Theide, Metals Program, School of Art and Design, 143 Art and Design Building, University of Illinois, Champaign, Illinois 61820.

IMPORTANT: Photographs are critical to the success of your work in print. Please pay attention to lighting, composition, focus and background color.

All articles by this author
Previous Origins, Evolution and the Practice of Enameling
Next Galleries: Concepts Gallery
Social media