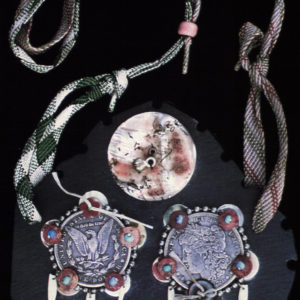 Naive, primitive, anonymous, magical are characteristics that often accompany our image of the folk artist. In reality, he is an artisan who seeks to understand, preserve and reflect the beliefs, traditions and customs of the common people, often with untutored methods and humble materials. 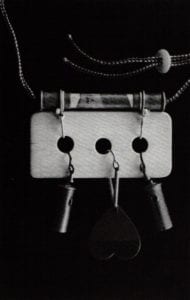 The challenge of the folk artist is not an easy one. As society changes, so do its customs: As new myths arise, old ones are displaced. Rendered irrelevant, material, imagery and technique must be thought anew. What remains constant, however, is society’s need for the folk artist, someone to communicate the commonplace, to speak in the vernacular, to reveal its evolving mythology. 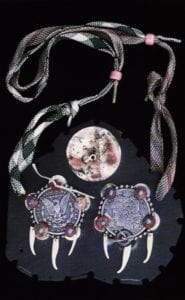 “Waiter there’s a Shark in my Avocado”
Pendant is a slice of fresh avocado pit with the hole carved larger than the petrified shark’s tooth. The pit is put in the sun to dry, shrinking around the tooth to form a natural bezel. Necklace is made with black beans, pampas grass, rose-bush twigs, glass beads and copper tubing

Society needs these objects, which in the words of Soetsu Yanagi “are made without obsessive consciousness of beauty; thus we catch a glimpse of what is meant by ‘no-mindedness,’ whereby all things become simplified, natural and without contrivance. These are the qualities that provide a permanence of strength throughout the social and aesthetic edifice.” 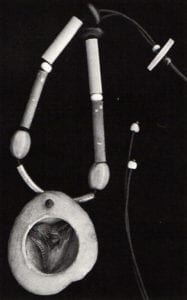 Flotsome & Jetson: A bottle of 10,000 still lifes
Hold by the end horizontally and rotate the bottle very slowly toward yourself. Each time, a different composition of juxtaposed object appears from the well over 100 different elements (new, old, and antique)—40 or more I have altered in some way from their original state: colored, coiled, cut, shaped, sawed, bent or connected to other objects

Van LeBus appears as an outsider. His Pan-like features, small stature, devilish goatee and impish smile seem to be taken out of the pages of an ethereal mythology. He is an esthetic itinerant, associated with neither school nor style. His art goes where he goes, though he can often be reached in Abilene, Texas. He is an American prodigy, nonetheless, and a true contemporary folk artist. 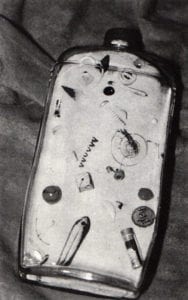 Junk is extra precious to Van LeBus and central to his tale. Junk is the residue of experience, of culture, of the language and feelings for the objects we make and possess. If the folk arts are to be rejuvenated in contemporary society, it must be through the appreciation of the objects that define our culture. If we are to regain the feeling for a common experience, we must reexamine what we discard. 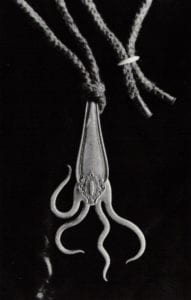 Van LeBus’s compositions retain much of the formal attraction of “native” American arts, yet his material and technique are decidedly contemporary. He is a “materialist” in a materialist society, using objects to carry sociological meaning. With machine made, previously worked or natural artifacts, he re-presents the suppressed histories that resonate in these objects. They are jewels of a strange sort. 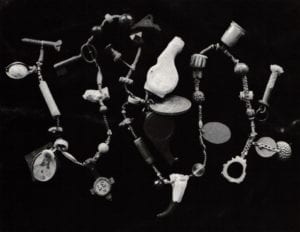 His technique is a testament to “American ingenuity.” In a whimsical way, he unveils the grandest of American myths, the belief that there is no problem that we cannot devise a tool to solve. His reworking of found tools, like his approach to form, imagery and materials is directed by random, almost insouciant, experience. Throughout his notebooks, from which the quotes on these pages are taken, he speaks in a spirit of play and discovery that reflects the social function of his art.

My education started long before the days of plastic garbage bags, hunting for treasure and adventure down the alleys and vacant lots of Abilene, Texas; searching for wealth and security in haunted houses and deserted mansions; seeking all the lonely, dusty, grassy, sunny, happy, forgotten places a boy could find. I had potential various lofty professions: witch doctor, medicine man, royal jeweler, fetish maker, shrine builder.

My biggest hardships: schools, parents, teachers—all tried to disillusion me.

Ganoksin is sponsored by
My best teachers: Boy Scouts of America kept my sense of adventure high; gave me an interest in Indians, beads, explorers, sailors; taught me ropework, knots, collecting and trading, carving and fashioning personal objects.

Degrees: a little degree of hope for modern progress, a high degree of faith in daydreams and magic and a great degree of love for abandoned things.

My work is an outlet for the frustrations of feeling like a misfit in middle class America.

My strong feelings for the product components create its design and invent its construction techniques.

I try to put objects with other things—or embellish them—in ways that will attract other people’s attention buy not distract from or destroy the beauty of their original form and function.

Ganoksin is sponsored by
I try to put objects with other things—or embellish them—in ways that will attract other people’s attention buy not distract from or destroy the beauty of their original form and function.

I don’t think I would ever have to justify junk or rationalize rubble, but other people put doubts in my mind so I have to make something that will elevate them from the category of trash.

All articles by this author
Previous Recent Sightings: Designer-Craftsman
Next Fads and Fallacies: Art is Life
Social media