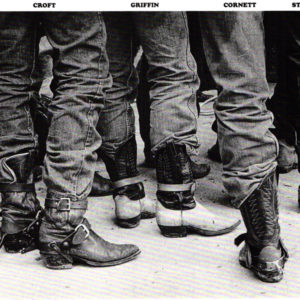 This article is one of a series of articles from Metalsmith Magazine “Fads and Fallacies”.  For this 1987 Winter, A. Stiletto talks about fashion fads.

Annually for many, not so frequently for most, the elite of what is loosely called the metals world packs its bags and ventures to some amiable universal for that mysterious ritual, the conference of the Society of North American Goldsmiths. The focus this year was the mythic terrain of northern Arizona, home of the Grand Canyon, of Red Rock country that trolls the heroics of John Wayne and the tales of Zane Grey, and where the group resolutely pitched camp at Northern Arizona University, Flagstaff. Here was a fitting place, a fine spot to track the rising stars, discern the powerful constellations and scan the horizon for the big idea.

Soothed by the climate, this natural sanctuary and the prospect of professional enlightenment, the faithful established ties, bestowed kudos and shared secrets. Not all was bred of sobriety, though, as the members employed carnival-like diversions throughout their stay. They donned the persona of colorful clowns, lions roaring in defiance, barkers dispensing snake-oil bromides, acrobats with glittering slides and magicians, so many magicians, with their powers of alchemy, patination and electroforming. In the end, it is the members themselves who fascinate, for they are a curious lot. Bound together by the tenuous code of precious metals, forged over the centuries, they arrive in modern dress that disguises their gilded heritage. They come as tenured educators, master gurus and solitary artists, as entrepreneurs, scholars, designers and technicians. Some make jewelry, some don’t; some work with metal, some don’t; some know what a goldsmith is, some don’t. They all come searching for something lost and for something not yet found. They exude the confidence in the search that will bring them back another year. Like the 49s of old, their mind is rewarded ambition.

Back in the real world, the search is validated by results. Amidst the insouciant speculation and creative temper at these meetings, there always creeps the shadow of reality, asking for credibility and a mortgaged security. 1986 was no different, as the anxiety for “real” success rendered succor to the big idea. Aspirant, seeking the glamour of the spotlight, offered their vision of the mother lode. They jawboned for an inner search, for the tabula rasa that is rid of artspeak and the dialects of the intelligentsia. They trumpeted the glories of fabricating a satchel of fanciful trinkets. They prophesized the Xanadu of electrodes, diodes, high tech and high touch. They painted a grim picture of the “market” as the Silver City of wet dreams.

The anxiety for the big idea, the ready made, foolproof formula, seems fueled by a latent fear of fashion. An onerous term, fashion connotes temporality, even glibness; it qualifies an idea as that which is to be dismissed in time. The big idea, on the other hand, resonates with permanence, an enduring truth upon which art, science and even commerce are built. But the search for the big idea rarely yields its intended results. And many have been vanquished in its pursuit. Time and experience offer a humble alternative in the existential satisfaction of knowing we are simply on the right road. 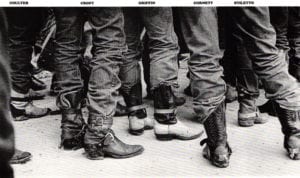 Jewelry’s dual burden as an ephemeral form and a profession of dispensible ideas has understandably led many of its ranks to seek solace elsewhere, to escape the doldrums of the minor arts. However, maybe it’s time to shed the paranoia that reinforces anxiety and to reexamine with confidence some of the “small” ideas that have slipped out of the limelight as a result of neglect or ignorance, to reexamine the “minor” achievements that have paved the path to jewelry’s progress. Maybe it’s time to define the direction rather than the goal.

For this writer, there is no better way to reclaim jewelry’s future than by confronting the strawdog of “fashion.” Already, the myth of fashion’s impotence is under attack from all corners of the intellectual spectrum. Kennedy Fraser, fashion critic of The New Yorker, has said: “Fashion usually is neither named nor noted but is simply the lens through which our society perceives itself and the mold to which it increasingly shapes itself.” What more relevant activity is there for jewelry than to engage social conduct through the perspective of the jeweler’s “lens”? Roland Barthes, the semiotician and streetwise philosopher, has produced a tome on fashion’s efficacy in which he concludes, “Countless objects that inhabit and comprise the image system of our time will increasingly derive from a semantics and will become the scene of any imagined universe.” What more intriguing purpose is there for jewelry than to exchange the verbal language with a language of objects worn in quotidian parlance?

Jewelry’s own practitioners have also contributed to “fashion” as a legitimate exercise. The “body sculpture” movement in Holland and England can be counted as an innovation in portraiture. The ability to enliven the body’s façade with spatial empathy and structural form has taken the dialogue on jewelry’s art to a higher plane, no less significantly than issues of context and appropriation have done for painting in recent decades. The ability to invest objects decades. The ability to invest objects with personality traits common to the user is no less profound in the “frivolity” of much of this jewelry’s esthetic than in the “hedonistic” furniture of the Memphis group.

On this side of the Atlantic, fashion is the very fabric of our democratic vista, where the sacred and profane exist in harmony, where the vernacular reigns supreme. The sign systems that obsess Barthes have no more fertile terrain than in the U.S., as our coveted individualism requires a full repertoire of imagery, both symbolic and narrative, to clothe its character. From the T-shirt and designer label to pop art jewelry, the modern talismans, the badges of controversy, the provocative portraits on a pin, nowhere are cultural myths more profusely illustrated.

What causes me to think about fashion is the memory of those cowboy boots, so ubiquitously worn at this year’s conference. In the East, they appear as a style affectation, a kick-ass idiosyncracy. In the West, their  natural habitat, they are a functional necessity, sometimes worn as a symbol of heritage, or maybe a metaphor for rugged individualism, or possibly the esthetic pride of a different sensibility. I have a pair somewhere in my closet. They are well crafted, fabricated from an ignominious hide . . . snake, lizard or something. They were made by an artist, Lama, Lucchese—I don’t really remember who . . . I think I’ll wear them more often.

By A. Stiletto
Metalsmith Magazine – 1987 Winter
In association with SNAG‘s