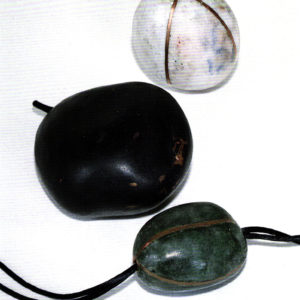 Joseph Albers, a colorist par excellence, always said that in visual perception a color is almost never seen as it really is—as it physically is. Color is the most relative medium in art; it deceives continually. To apply color successfully we must learn that the same color evokes innumerable readings.

But there is a problem in Albers’s theory of color, especially for craftsmen and other artists who use material plastically Albers preferred to see color as an illusion of the eye; emphasizing the immateriality rather than the materiality of color. Both he and his wife. Anni, became interested in color from viewing primitive textiles. While Joseph proceeded to abstract the effects of color in his paintings. Anni produced weavings that forced the recognition of color as inseparable from the recognition of fiber. Behind every visual image in her textiles lies a mechanical stability the physical structure of the weave. The human beings relationship with the object is validated by a material support rather than an illusion Anni Albers’s “truth to materials” is the veracity of color’s expression, which contrasts with Joseph’s credibility of color as a purely optical language. 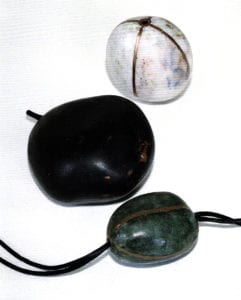 In jewelry, the supreme colorist is the enamelist. In a painter’s hands, enamel is a pigment that can be used to decorate surfaces with an illusion of color that Joseph Albers preferred. But for the jeweler, enamel is more importantly a thin coat of glass, which when heated becomes fused to metal. It not only has the optical effects of surface but also structure and composition that are tangible and thus expression that is palpable. Its color is unique to the material and cannot be separated from knowledge of the material. Unlike paint, enamel rivals the jewel because they share the properties of translucency/opacity, reflection/refraction and mutable pigment that are organic by nature and appreciated as such. Enamel attracts us by the structure of its color.

John Iversen’s pursuit of enamel has led him in recent work to apply techniques of carving as a time-honored, reductive technique that excavates the inherent physical properties that constitute the final form. Jewelers have always respected the art of the gemcutter, and work as disparate as that of Margaret De Patta and Deborah Aguado attests to the valuable contribution it makes to the ultimate interpretation of the piece. But currently there seems to be a new interest in finding the root cause of the gems esthetic rather than utilizing its effects. Jack Prip has been carving stones and Pavel Opocensky has brought a new realization to the industrial material Colorcore, carving away its coloristic illusion to find its material reality. 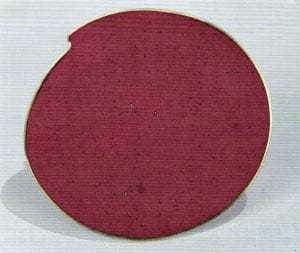 The best way to describe John Iversen’s attack on enamel is to see it as analogous to stone, ivory or plastic. Take the case of how ivory used to be manipulated. The elephant’s tusk is an organic compound of enamel, dentine and bone. During the elephants life, the enamel erodes from the tusk and what remains is natural material that upon inspection and investigation through carving reveals a complex structure of fibrous patterns, chemical hues and biological formations that are susceptible to light and temperature.

What John Iversen does is file away and carve through the colored enamel surface that he has fused onto copper stone shapes, removing that psychological boundary of illusion. It is no longer the surface of the enamel we are looking at but the structure of the material that suggests a relationship with color as a product of growth. What are the true color properties of enamel, what is the truth of the material and what is our superficial appreciation of its conventional use, once we get beneath the surface?

John Iversen was chosen as the Society of North American Goldsmiths’ selection for exhibition in the New Designer room at the Jewelers of America Show this past summer. His work has most recently been shown at the Helen Drutt Gallery, New York/Philadelphia, December 7, 1988 – January 7, 1989.

All articles by this author
Previous Recent Sightings Artlike Jewelry
Next Exhibition in Print: Metalsmiths Win The West
Social media