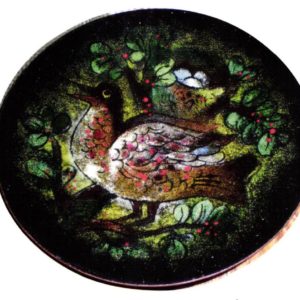 The Influence of Enameling

My earliest awareness of the art of enameling occurred when I was only ten or eleven years old. My father, a prominent eye surgeon, had received a few of Karl Drerup’s beautiful plates as payment for treatment given to Karl’s young son.

The boy had an unusual eye condition and the Drerups had been referred to my Dad. They had just recently fled Hider’s occupation of Austria, and had very little money. Karl was very proud, and though my father refused to charge him, Karl insisted on giving five or six of his pieces as payment. My parents recognized them as museum quality, and carefully wrapped them, and stored them away for my brother and myself. One is pictured here.

After the death of my father, the plates were given to us. My three were too precious to risk in the constant changes in my life and location. I wrapped the smallest one, to keep, and boxed it in a drawer of my china cabinet. One was sold to a museum in California) one to an east coast collector. The enameling was so amazing that I never connected it with the schoolroom craft, with which I was familiar.

I always aspired to be an artist. In high school I joined the art club and took every art course offered. In college, I majored in Art, but World War II interrupted all our lives. I married, had my first child, and lived with my parents until my husband returned from overseas. During those years, I visited local hospitals, which received wounded soldiers, and wrote letters, or did portraits for them.

After the war, my life was pretty much that of any young wife and mother, until Dell Publications rescued me. My creativity had been concentrated in writing and illustrating bedtime stories for children published in our local 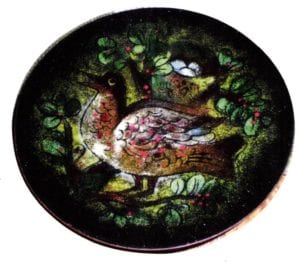 newspaper. Oskar Lebeck, an editor at Dell, liked a few of my illustrated stories. A six year stint of free-lancing in the comic book world followed. I wrote for the characters, Howdy Doody, Tom and Jerry Woody Woodpecker and a variety of others.

I had earned a Masters Degree in Elementary Education, and was augmenting the family income by teaching in Westport, Connecticut. During the summers, I co-owned and directed a summer camp for girls, here in the Adirondack Mountains, where I now live. Since I was an artist, the Art program was of prime importance to me. It had to include crafts, which would encourage campers to spend time being creative. They would have special things, which they had made, to take home as gifts, or as memories of a happy summer.

One of the craft catalogs featured a small box kiln, and a kit with all the necessary equipment to begin enameling. The instructions seemed simple enough, but the counselor hired to run the studio was unable to achieve results. At summer’s end, the kit was virtually unused.

Since I was not willing to waste the investment, and the idea of fusing glass to metal intrigued me, I “played” with copper shapes, colored powders, colored glass threads, and beads for the remaining weeks of the summer. Then it was back to Connecticut and my job as an elementary teacher.

When we closed the camp in 1970, all the art materials, including the enameling supplies, were brought home. I bought a few “How-To” books for beginners and worked in a small area of our furnace room before and after teaching hours. By 1980, my first enamel pins sold to a gift shop in Lake Placid. I drew and cut stencils of ice skaters, and miniature scenes. I began using the “overlay” method, and cutting numerous overlays for each design. It was the beginning Naml-On (see page 44 to order). Since I was selling production pieces and store-buyers wanted consistency, I had to design a way to work rapidly and do more exact replicas. The Naml-On Color Controller was the result.

Large enamel pieces like plaques, plates, boxes and other items are not for production. They are individual creations, and I love doing them. They require much work and thought, and many firings. The Color Controller is for small items, up to 2-l/4 inch diameter, and for any shape accommodated within that diameter. It has been a great help to me, and I’m certain will prove a doorway to a successful career in enameling for others.

Karl Drerup’s genius as an artist and enamellist keeps me humble, knowing what can be done, keeps me trying. Although two of his lovely designs are no longer in my possession, the poetic imagery of them is imprinted on my mind. His gift to my father has had a lasting influence on my creative life, as it has had, I’m certain on the careers of many others, who work with glass on metal.

Ganoksin is sponsored by
By Stevie Copozio [Volume 28, Number 2, April, 2009]
In association with