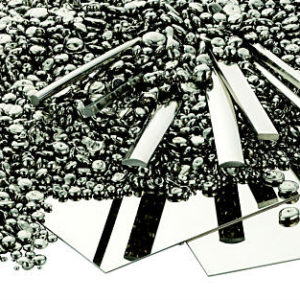 When it comes to white gold, my customers want the brightest, whitest white they can get — and some are not willing to pay the premium prices palladium can command. So where do manufacturers turn for a bright white alloy that doesn’t require rhodium plating? Stuller Inc. in Lafayette, Louisiana, may be the place.

When I first saw the company’s new X1 nickel-white gold alloy, which falls into the Grade 1 category of the White Gold Whiteness Index, I was impressed by its color. But the true question was how it would perform in my casting shop.

X1 is available in 19k, 18k, 14k, and 10k casting grain, as well as sheet, sizing stock, and matching solders. (Although the alloys contain a significant amount of nickel, Stuller states that finished X1 product has passed the EU Nickel Release tests.) I decided to put the 18k, 14k, and 10k alloys to the test in my facility, as these are the most common karats requested by my customers.

Prior to testing, I consulted the brochure provided with the alloys to obtain suggested casting temperatures:

I conducted all the tests with my pressure-over-pour vacuum-assist induction casting machine, using UltraVest MAXX investment from Ransom & Randolph, which is specifically formulated to handle the high temperatures associated with many white gold alloys. I used my standard 10-hour burnout schedule, but all 12 test flasks were placed in a separate test oven and not cast with production work.

In the first test, we cast some small ladies’ signet rings to determine how the metal behaved under the suggested casting temperatures, as well as to assess basic fill and surface characteristics. I set up four trees with 12 rings per tree: one tree for each alloy type, as well as a sterling silver reference tree. All three alloys were cast at the lowest temperature suggested for each, using a flask temperature of 1,000°F/538°C. The first melt was done with all new material, using argon as a cover gas on all the test flasks. We kept all the charges the same weight on all the flasks for consistency, which affected the size of the buttons on the higher density alloys.

We cast the sterling silver flask first and let it cool for 20 minutes before quenching. The tree was normal –slightly dark after breakout, but bright and clean after devesting and pickling.

We cast the 18k X1 alloy next. We followed Stuller’s recommendation to quench just after the red glow is gone for all the alloys in this test. If this procedure is not followed, you won’t get the optimum as-cast hardness. After a recommended four-minute cooling period, the flask was quenched and de-vested. The castings showed a slight oxide formation; however, after pickling and ultrasonic cleaning, the tree was a nice, dull white.

Checking the casting ma-chine before flask three, the 14k alloy, I found a small amount of residual material left in the crucible. Since this doesn’t usually happen with other 18k white golds, I assumed it could have been a result of heating the metal to too high a temperature. We collected the residual material and cleaned the crucible for the next test.

The 14k flask was cast and quenched. Upon inspection, the 14k tree seemed to be slightly brighter and better in color than the 18k. I would guess that this is because the 14k contains a slightly greater amount of silicon than the 18k does. Despite the added silicon, I didn’t see any increase or change in grain size from flask two to three , which I would normally expect with this type of addition. This could be due to the fact that a grain refiner is used in all of these alloys.

Flask four, the 10k, was cast in the same manner as the previous three flasks, using the same temperatures and quench times. The 10k left a considerable amount of material in the crucible when cast at 2,000°F/1,093°C; essentially, it was an incomplete pour. Therefore, I decided to increase the casting temperature for the 10k alloy to 2,050°F/1,121°C. After cleaning and pickling, the 10k had the greatest amount of surface oxide. Despite this, we achieved a fine finish during polishing.

Next, we wanted to examine the surfaces of the castings to determine their reaction to the investment. To do so, we cast plates measuring 1 1/4 inch by 2 inches at the same flask temperature used for the rings, 1,000°F. For this trial, we used a 50/50 charge of new metal to re-cast metal. The same procedure for casting was used on all the trials except the 18k gold; due to operator error, no pressure or vacuum was used during the casting. This gave us some non-fill results, but did not affect the surface test.

All four casts gave us the same results as the first set of tests: We achieved smooth surfaces with no finning, cracking, or spalling. The 18k had a small amount of residual material left in the crucible. The 14k cast very clean and bright, with very little surface oxide on the plate before cleaning and pickling. The 10k poured completely at the in-creased casting temperature of 2,050°F, and there were no visible effects of investment breakdown in the finished castings. As a point of comparison, the sterling silver tree cast normally.

I attribute the significant increase in fill in the 10k to the increase of superheat in the melting temperature. Based on this hypothesis, I would assume that you could increase fill by bumping up the superheat on the other alloys. However, this method could also lead to shrinkage porosity.

Overall, the three alloys behaved better than expected, given their high nickel content. We did not experience the typical cracking or gas porosity common in most high-nickel white golds.

However, it’s important to note that this is not a perfect white gold alloy. A perfect Grade 1 nickel-white gold alloy that doesn’t require rhodium plating doesn’t currently exist. First, these alloys will not hold up to being abused during melting and require good melting and casting practices. I would find it difficult to get good results with torch melting, due to the lack of control of melting temperature and no cover gas. Manufacturers who have poor burnout schedules would also have difficulty with these alloys. Carbon left as residue in the flasks from a bad or incomplete schedule will affect the results and finish of the castings.

The X1 alloys will be a great asset to manufacturers who strictly monitor their casting processes. The 14k white is the whitest white gold alloy that I have used. Due to its bright white color, good casting characteristics, and the availability of mill products and solders that match in color, this alloy can fill the needs of manufacturers who are seeking a premium white gold that doesn’t need to be rhodium plated and also meets the requirements of the EU Nickel Directive.

We are pleased that Mr. Drogs’ results are consistent with the independent reports we have received from other manufacturers who have been using X1 for several months. Look for additional products manufactured with X1 from Stuller in the near future.