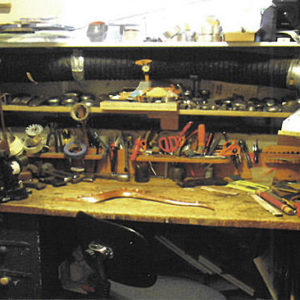 The approach to Cynthia Eid’s studio reveals nothing of what lies inside. A steep driveway off a suburban street leads to a simple red house tucked into a hillside. As you walk down the path to the front door, the only indication of the studio within is an assortment of rocks and objects sandwiched between window blinds and glass.

Once inside, one sees little delineation between work and living spaces. Rather, there is an observable change of texture as the densely covered walls and shelves shift from African art to family photographs to metalsmithing books to racks of hammers. In between are curious collections and hints of the family’s other fives: musical instruments, an arrangement of metal purses, and a beautiful silver mezuzah (made by Munya Upin) on the studio doorframe.

Consisting of three small rooms crammed with tooks, boxes, and books (including a spare bathroom complete with shower stall/patina spray booth), the studio is part and parcel of Eid’s home. This is not a grand sanctuary, it is the workspace of someone who has carved time and place out of a full family life. By the confines of the available square footage, the studio seems to have grown like a bonsai tree: small yet fully formed. The bench space is painfully tiny and the soldering area appears totally inadequate considering the scale of the commissions Eid produces. But, whether it is through disciplined and methodical work habits or by an ability to just “make do,” Eid creates pieces that defy this constriction and exist fully and beautifully in large and magnificent spaces.

This is also clearly the space of a curious technician. Flanked by two hydraulic presses (one large, one enormous), the workbench is stacked high with forms and adaptors for the deep draw press, parts for doing microfolding, as well as traditional forming tools but. with little evidence of traditional approaches. There’s no room for giant stumps, stakeholders come out only when necessary, and forming is achieved by what the artist calls a “crazy mix” of hammering and machine. Eid (along with Anne Larsen Hollerbach and Phil Poirier) is considered an “Official Product Tester” for Bonny Doon and has provided valuable research and feedback to Lee Marshall. In addition to evaluating the tools and suggesting improvements, they help write the instructions and, according to Marshall, “meet the needs of the end-user that simply can’t occur in another manner.” You can also tell that Eid loves playing with possibilities. “Thor,” the larger of the presses, gently hums as she demonstrates its slow-motion dance. New tools often lead to new designs as well as the need to solve technical problems leading to new techniques. While there is the danger of these “tool and technique” packages producing dull or cookie-cutter results, Eid manages to use them as a means for exploration and exploitation rather than an aesthetic end in of themselves.

Ganoksin is sponsored by
Bonny Doon and has provided valuable research and feedback to Lee Marshall. In addition to evaluating the tools and suggesting improvements, they help write the instructions and, according to Marshall, “meet the needs of the end-user that simply can’t occur in another manner.” You can also tell that Eid loves playing with possibilities. “Thor,” the larger of the presses, gently hums as she demonstrates its slow-motion dance. New tools often lead to new designs as well as the need to solve technical problems leading to new techniques. While there is the danger of these “tool and technique” packages producing dull or cookie-cutter results, Eid manages to use them as a means for exploration and exploitation rather than an aesthetic end in of themselves.

True to the necessity of “making do,” a full-scale drawing of her current commission is pinned to the wall of a narrow hallway outside the forming room. Even after backing up well into the room it was still difficult to see the entire drawing in proper perspective. Upstairs, the parts in progress sat on the family pool table.

Appearing as musical notes on forged brass lines, stylized letters of the Hebrew alphabet spell out “hallelujah.” The organic and fluid quality of Eid’s metal forms seems well suited to the graceful movement of Hebrew calligraphy. Formed out of thick copper, with flowery hammered edges. the pieces float along the surface of the horizontal lines, creating a sense of movement in the shadows and patterns on the wall. As she often works on many things concurrently, shifting from jewelry to holloware to large-scale installations, there are bits and pieces and experiments tucked everywhere. Looking at Eid’s work in different stages of completion seems to reveal more of her aesthetic and inventive approach than is necessarily evident in the finely finished end product.

During the visit there were several times when Eid’s eyes brightened: while describing her two sons, Eric and Andy, and their achievements (musical and otherwise); her participation in the Reiner Family Band (which includes her sons and husband, David Reiner); and, in particular, the Judaic commission work she has done over the years. To be able to combine the technical with the spiritual seems deeply satisfying to her and there is a distinction between how she describes those commissions and, for example, a lucrative jewelry commission. This subtle but clear difference was very moving.

As her sons neared the age of their Bar Mitzvahs, Eid became interested in making Judaic objects for her family. A Seder plate exhibited at the Spertus Museum in Chicago was the entree to her first large-scale commission for a synagogue. For her, this work has turned out to be the perfect blend of the gift of making and the belief in what you’re making. On her desk is a paper model of an Eternal Light she created for her synagogue. Each member’s hands, from young children to the very old, were photographed and photo-etched into metal. The cut-out hands surround the light, appearing at first as an oversized unfolding flower, but a closer look reveals the individually expressive shapes of worshipping hands. A simple but powerful statement of faith and community, the sculpture illustrates one of the key themes of Eid’s artistic life.

Despite working in a small and isolated studio, a strong sense of community awareness is apparent in most everything she does, whether it is through commissions, teaching, her team Bonny Doon explorations, her 20+ year participation in “Forge and Gorge” (a women metalsmiths potluck discussion group), or playing banjo and backup vocals for the Reiner Family band. The “meaning” in her work, when it is an important element, comes from the successful blending of her ideas. her spirituality, and her family.

Ganoksin is sponsored by
By Claire Sanford [Metalsmith Magazine – Spring 2005]
Claire Sanford is a metalsmith, jeweler, and partner in Top Dog Studio in Gloucester, Massachusetts.