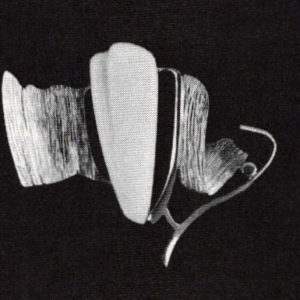 Reviving the virtually dead enameling technique plique-à-jour, which means “the light of day as seen through a membrane,” has been a challenge to Jean Sampel and Susan Noland since the late 1960s. Their interest in this technique, perfected by the Russian enamelist, Peter Carl Fabergé, and the Art Nouveau jeweler, René Lalique. began during their student years at Drake University in Des Moines. When the two designer-craftsmen collaborated their business efforts as The Goldsmiths, their jewel-tone plique-à-jour objects were displayed along with jewelry and holloware. “Beauty is always in vogue,” Sampel reminds us.

Prior to opening their studio & shop in 1978, each woman had been teaching and maintaining a studio in her home. They stopped teaching and started their business without a bank loan or financial assistance. The extent of their capital was a $3000 commitment by each proprietor. Since then each has been able to support herself entirely from business-derived income, which greatly exceeds that of craft teaching at the university level. The business has attained top rating by the Jewelers’ Board of Trade and a favorable listing in Dun & Bradstreet. (The listing resulted from a credit rating check by Dun & Bradstreet at the request of a diamond supplier. The actual or estimated net worth of a business plus the composite factors of ratio of debt to investment, cash flow and promptness in bill payments determine the Dun & Bradstreet evaluation.)

Very soon after The Goldsmiths opened on a small shopping street in a public high school neighborhood, a silver-haired woman asked them to shorten and file some old-fashioned, white metal hairpins which were too heavy for her thinning hair. It was hardly a test for the talents of a designer-craftsman, but the job was done. “Since then,” says Sampel, “we have made several custom pieces of jewelry for that woman and her friends. She has become a patron as well as a customer.”

Many of The Goldsmiths’ customers had become familiar with their work at local exhibitions and fairs. However, it was primarily by word-of-mouth that their reputations were established. Even now they do not advertise; it is their clientele which does that for them. It is not unusual for a customer to walk into the studio, lean across the half wall which separates the display area from the workbenches and say, “I just want you to know how much I am enjoying the piece you made for me.”

In addition to a limited clientele, Sampel and Noland each brought to the business equipment, sound credit with suppliers and some antique wooden wall display cabinets and standing cases. What had been a T-Shirt factory wedged between Pappagallo’s and a travel agency was transformed into a 600 square foot studio & shop. Except for the carpeting in the display area and the sink in the work area, The Goldsmiths did all the renovations themselves—painting the walls, hanging a large cork display board, handlettering the business name on the door, making the outdoor awning, painting and installing the eight-foot shutters across the storefront window and refinishing the massive old safe with black Chinese lacquer. During the two months it took to complete the work, friends and shoppers dropped in to watch and, occasionally, to offer advice or lend a strong arm. 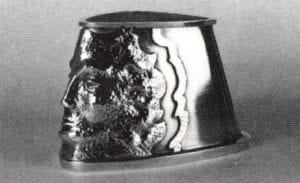 Although the design of the objects displayed is sophisticated and much of the jewelry gold set with gemstones, the atmosphere remains casual, friendly and comfortable for even the shopper with limited means. Depending upon who can stop working at the moment, either Sampel or Noland will talk with the prospective customer, explaining the craft process and suggesting something appropriate, if it is available. Custom design and commission orders have increased to the point at which The Goldsmiths have difficulty maintaining a retail inventory. One year after they opened, they decided to close on Mondays so as to have uninterrupted studio time. Now, they are also closed during August to prepare for the Christmas season.

Noland expresses delight in the custom-design orders, “We get to be in on so many special occasions and surprises for our customers: a 40K amethyst ring replaced for an elderly mother by her children who remember playing with the original ‘rock’ in their childhood; a plique-à-jour box for Los Angeles relatives celebrating their 30th wedding anniversary; a sterling silver Kiddush cup for a granddaughter’s Bar Mitzvah.”

By combining studio and shop The Goldsmiths involve their customers in the metalsmithing processes. When odd numbers and shapes of stones are brought to them for new designs and mountings, their creativity and design originality are stimulated and expanded by the customer’s ideas. “Because so few customers are able to visualize the finished piece, even though they have seen it in various stages of progress, we are thrilled by the trust placed in us,” says Sampel. She recalls a very wide, old ivory bangle bracelet which had a deep crack. The customer had asked Jean to break the piece and make a hinge so that it would be wearable again. “The next time I saw the bracelet with its gold and silver hinge and jewel-topped holding pin was at a designer-craftsmen show as one of my entries!” 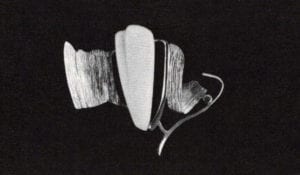 Men watch the activity in the studio with fascination. An orthopedic surgeon, dentists and men who enjoy manual arts as a hobby are at ease there. Accessibility to the public is an advantage to The Goldsmiths—the customer better understands the techniques and processes. However, they acknowledge that it can also be a disadvantage. Helping browsing shoppers as well as chatting with regular customers reduces work time.

Even this limitation does not stop Sampel and Noland from entering local exhibitions because they are committed to the high standards of the art community. Still, they no longer attend art fairs. Occasionally, they submit work to national shows. Sampel’s Beetle Box received the Merit Award at the 1976 International Enamel Exhibition in La Jolla, California. Noland’s sterling silver and Biwa shell caviar spoon and silver honey dipper were in the 1980 “For the Tabletop” exhibition at the American Craft Museum in New York. The women are willing to exhibit any piece they make. “We do not differentiate between work made specifically for exhibition and that for the retail trade. Every piece worn or used by our customers is ‘on show.’ “

The Goldsmiths have established a unique learning-while-shopping experience in their studio & shop and have made the Des Moines community conscious of the role designer-craftsmen can have in choices of contemporary jewelry and metalwork.

Joan Mannheimer is a collector of contemporary ceramics and serves on the advisory committee to the University of Iowa Museum of Art.