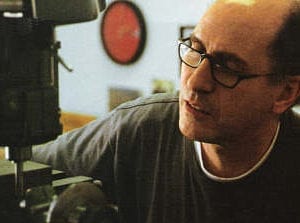 Abrasha’s studio on the sixth floor of the Shreve Building in downtown San Francisco, there’s a photograph of the area just after the 1906 earthquake, in which his building stands in lonely splendor amid the rubble. It’s good to know in this quake-prone city that one’s place of work is reasonably safe. It’s also useful that the building is still home to many in the jewelry business and its ancilliary trades, and even its namesake, Shreve.

Abrasha occupies about 300 square feet of neat, well organized space. Unlike many jewelers, who make do with garages, kitchen tables, barns, and industrial offices, often characterized by a lack of light, he enjoys a corner office with large picture windows. Against the walls are an office desk, jewelers’ workbenches, and fabrication equipment, and in the center are more heavy-duty items, such as rolling Milk, a lathe, and milling machine; most are old but still in fine working condition.

Abrasha-who dropped his unpronounceable surname in favor of the Russian diminutive for Abraham does not refer to himself as a jeweler. “Don’t call me that. Please call me a goldsmith!” He does not even call himself an artist, but admits to being pleased if others so regard him.

Dutch-born and European-educated; Abrasha is justifiably proud of his special hallmark, awarded to him in Amsterdam for achievement as a master goldsmith. He earned it the hard way, by studying for two years at the School for Goldsmiths in Pforzheim , Germany . After that, he served a one-year apprenticeship with a commercial firm, took a state exam that certified him as a goldsmith, then worked for the late professor Klaus Ullrich, one of Germany’s leading jewelry artists. In 1977 he left for the States.

He has kept a handful of souvenirs of his tough student years. There’s no art among them, nor wacky design, nor alternative materials-just impeccably crafted samples of basic metal fabrication techniques, including a bank of stones, set “a jour.”

Today is not the best day to visit. He is working against the clock to finish a ring for an international jewelry competition. Like most of his pieces, this is an essay in sleek, post-industrial design: stainless steel, gold, and diamonds, mostly cold-connected. However, Abrasha is focused, high-energy, and able to multitask sawing, fitting, answering the phone, and talking nonstop. He pauses for breath only long enough to give his sawblade a careful lick (“Spit is the best lubricant there is, and doesn’t leave a sticky trail like Bur Life or beeswax.” He’s right!).

Abrasha does not particularly like to talk about his artistic vision. He does, however, concede the influences of the work of his teacher Ullrich, the Bauhaus movement, and Japanese design, which share the appearance of effortless simplicity but in fact require consummate execution.

He revels in technology, particularly clean geometric forms, combining gold, platinum, and diamonds with such nontraditional materials as stainless steel, used C02 cartridges, and Pachinko balls. He is attracted to all kinds of machinery hardware, machinists’ catalogues, nuts, screws, and odd metal parts, which either inspire whole new designs or get converted into ingenious cold connections. His work is as smooth as a seal in water, colored only by counter-sunk gold rivets or playful ruby beads in mini stainless steel cages.

Like many jewelers, he pays the rent with wedding and engagement bands, and limited-production pieces, sold either through galleries, shows such as SOFA and ACC, or via the Internet. He also does commissions, some of which are inspired by his secular Jewish roots, such as mezuzahs, menorahs and ceremonial vessels.

Abrasha is happier talking about one of his major passions-high standards of craftsmanship in jewelrymaking. And he’s pretty opinionated about giving the U.S a low rating, as compared to much of Europe. ‘Each year, art schools in the U.S. graduate more artists than worked during the entire Renaissance,” he says, between licks of his blade. “Over 90 percent will never earn a living in their field. I have nothing but contempt for most of the crafts and metals education in this country.”

While some people might dispute Abrasha about this, his professional record speaks for itself. His honors and awards include a Diamonds International Awards Certificate of Merit (1986), a first-place award in the American Jewelry Design Council competition (1992), a first-prize Niche Award (1998), and “Best of Show” awards at the American Crafts Council show in San Francisco (1999 and 2001). He has pieces in California ‘s Oakland Museum , and in the Renwick Gallery, Washington, D.C. He’s also been a metals instructor at the California College of Arts and Crafts in San Francisco and the Revere Academy .

Like many artists, Abrasha is a control freak, even to the extent of making his own high-karat gold alloys, a time-consuming and irritating process he endured for about 20 years, mainly to produce material that was acceptably zinc-free. “While zinc makes the alloy paler and easier to work,” he explains, “it adds to the volumerather like adding bread to meat loaf.” A year ago, he abandoned this particular chore and began buying zincfree alloy from David Fell.

Abrasha is no St. Eligius (the patron saint of jewelers, 588-660 A.D.), however, creating modern masterworks the medieval way. A confessed computer enthusiast, he embraced computer assisted design, which he found ideal for his largely geometric designs. CAD replaced his 10-year-old 2-D program, and liberated him from ever needing to create more of his exquisite colored pencil or drypoint renderings. After many hundreds of hours struggling on his home computer, he mastered the trueSpace program, which he values for its flexibility and speed In making 3-D models. When finalized, he mostly constructs the designs himself or sends out some of the components to a machinist who’s familiar with computer assisted manufacture.

An extremely hard worker, Abrasha molds his studio time to meet the needs of his family and share some of the work of child-raising with his wife, Maria, a professional “life coach.” Abrasha takes the earlymorning shift, preparing breakfast for his sons (ages 10 and 6), supervising violin practice, and taking them to school. Hitting his studio by mid-morning, he works alone until 7 P.M. or later, and often works Saturdays, though he makes time to volunteer at his sons’ school art classes. A late father, Abrasha’s boys were born when he was in his fondles, and he will be glued to his bench until retirement age to see them through college. It’s fortunate he loves his work.

Jennifer Cross Gans is a writer and studio jeweler in San Francisco .