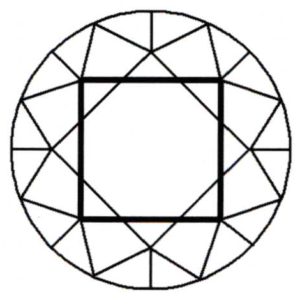 When setting a round brilliant diamond in a four prong setting there is some debate among stone setters on how to orient the stone. This is also known as ‘squaring the diamond’. Some feel it should be set ‘square on’ while others feel it should be ‘off square’. 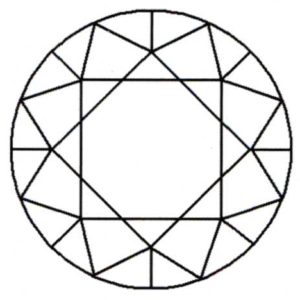 These terms are derived from the fact that if you look straight down on a round brilliant diamond the table facet and the star facets, when combined together, create a square.

There are two overlapping squares created by the table and the star facets, which form an eight-pointed star. 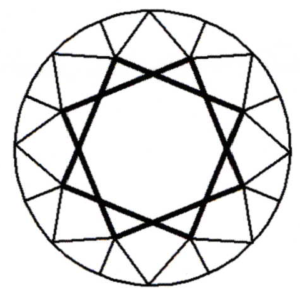 To set the stone ‘square on’, you would set the prongs over the facet lines between the upper girdle facets and the prongs would point directly at the corners of one of the two squares. This would line up the square evenly between the four prongs, which looks very pleasing to the eye. 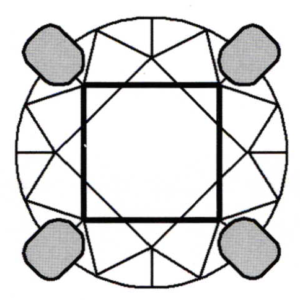 To set the stone ‘off square’ you would rotate the stone slightly and set the prongs onto the bezel facets, which are the large kite shaped facets on the crown. 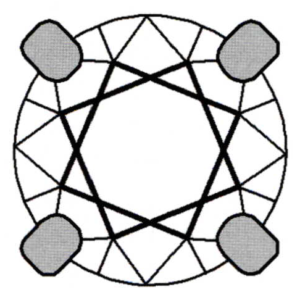 Although setting the stone ‘square on’ is slightly more pleasing to look at, I prefer to set large round brilliant diamonds in four prong settings ‘off square’. The reason I do this is a matter of security. 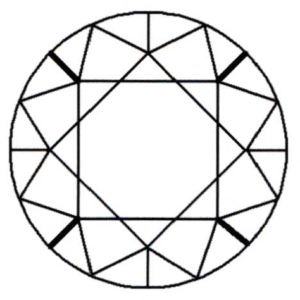 If you set a stone ‘square on’ the prong is placed directly on the facet line between the upper girdle facets. This line runs from the girdle to the point of the star facets and the star facet continues to the table of the stone. 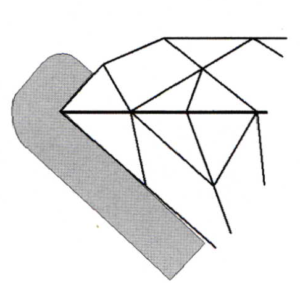 You can see from a profile view that there are two separate angles to reach the table, which means this is a higher plane going from the girdle to the table. 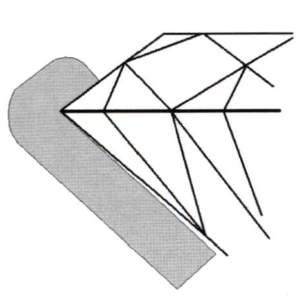 If you set the stone ‘off square’ you’re setting the prong on the bezel facet, which creates a straight line from the girdle of the stone to the table, which is a lower plane. 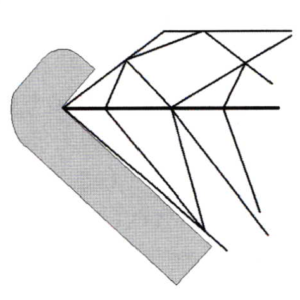 If the stone is set ‘square on’ and the customer bumps the stone, the stone could rotate slightly causing the prongs to slide over to the bezel facet, resulting in a loose stone. lf the prong is placed down tight on the bezel facet to begin with, it is set to the lowest point on the crown and the stone cannot rotate or become loose.

In addition, when the prong is placed over the facet line between the two upper girdle facets it is set on two different planes. You can see from an end view, looking down from the table, that the outside edges of the prong are raised slightly off of the stone because the facet line is holding the prong up in the air. Although this gap is very slight, it is still enough to snag the prong on clothing or catch a piece of thread under the prong. This is not only annoying to the customer, but it can also cause the prong to be lifted up, causing the stone to become loose or possibly breaking off a thin prong. 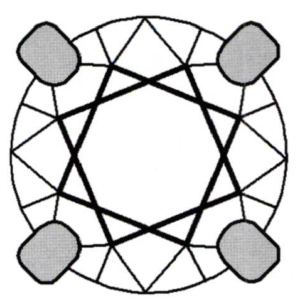 Because of these two reasons I feel it is more secure to set the stone ‘off square’ and place the prongs down fully on the bezel facets.

By Bradney W, Simon – © Bench Magazine
In association with 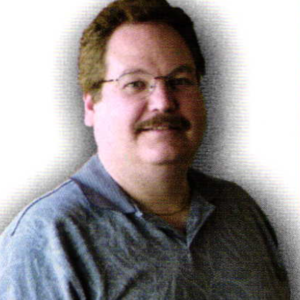