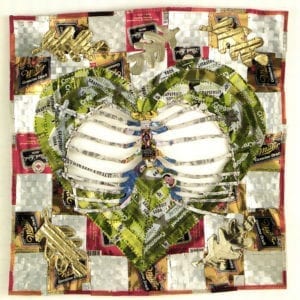 The Yankee qualities Ross Palmer Beecher mentions in discussing her art – thriftiness, tradition, waste not/want not – are almost as mythic as the stories, forms and genres she invokes. Whether emulating New England churchyard gravestones, quilts, flags, or various types of tramp art, Beecher draws upon a wide range of aspects of American culture to make her point: simple is beautiful, we can get by with less, the handmade is the key to salvation in an increasingly materialistic, throwaway society.

Born and bred in Greenwich, Connecticut, Beecher comes from the wrong side of the tracks. Instead of country club values, she was imbued with older Yankee myths: work hard, don’t borrow, and I-can-do-it-for-myself. Blue-collar rather than Peter Pan-collar, the 42-year-old artist left Rhode Island School of Design after two years in 1978 and headed west. 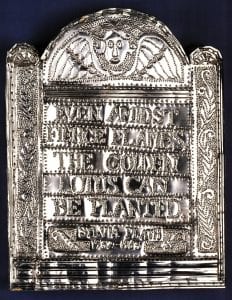 Once in Seattle, she undertook a series of odd jobs – “deli work, parking cars, and working in a laundromat” – and quickly realized that, although she had left RISD and “a lot of sophisticated equipment” her interest in making art was stronger than ever. Avidly riding her bicycle all over town, she frequently came across discarded materials like gas caps, bottle caps, auto tail light fragments, and empty soft drink cans.

Partly out of an urgent need to continue making art even in the cramped living quarters she still favors, and partly out of a desire to recapture the spell of her New England roots, she began a series of metal-and-mixed-media wall sculptures which today (17 years later) have gained regional and national attention in galleries, museums, and private and public art collections.

Faux-folk art is a strong trend in the Pacific Northwest. For nearly 20 years, various practitioners besides Ross Palmer Beecher (Buster Simpson, Wally Warren, Alison Slow Loris, John Rice and others) have adapted their art school training to emulate the innocence and wisdom of untutored artists along with their fresh, non hierarchical attitude toward materials. This is the milieu and context of Beecher’s art.

By 1986, she was being invited to participate in folk art-inspired exhibitions in Texas, Illinois, Louisiana, and California. Her early art does have closer link to the work of unlettered artists but is still individually quirky enough (in technique and subject) to separate her out from true Outsider or folk art.

Function is an oblique link between folk art and Beecher but none of her constructions are in any way usable. The quilts and flags operate as commemorative backgrounds for her over-the-top, obsessive material indulgences. Appropriately flat and two-dimensional, they proffer an image-ground that accumulates within each piece. As the social referents of the recycled materials are unraveled by the viewer, (Coke cans, chewing tobacco tins, BIC lighters, olive oil cans) the meaning of each piece emerges as a fusion of fragment, detail, and the whole.

Talking with Beecher reminds one of Emily Dickinson in logging boots (“I’m Nobody! Who are you?”) but the poet Sylvia Plath (1932-1963), is probably a more apposite comparison. Beecher’s 1983 Homage to Sylvia Plath uses only one material, perforated tin, and updates America’s first real art form – carved stone headstones – to both pay tribute to and claim Plath’s suicide as a warning and cautionary tale.

Using the same epitaph as Plath’s real gravestone in England: “Even amidst fierce flames/The golden lotus can be planted”, Beecher and Plath remind us that beautiful things can emerge out of turmoil. The aggressive punching of the metals is an expressionistic strategy that is obviated by the strict upright composition. Unusual among the artist’s work because the text is so central, it marked a point where language became image. Words serve as fragments of ornament in later works, whether product logos or ad slogans, downplayed in favor of the more obvious workmanship and visually complicated, not to say cluttered, compositions.

Homage to Sylvia Plath was also inspired by examples of Mexican folk art Beecher saw in Seattle’s many import shops. Rigged so that a candle may be inserted to illuminate the punctured letters, this work has distant links to Mexican Day of the Dead paraphernalia.

More Unitarian than Puritan, Beecher moralizes in ways that most New Englanders would recognize as an inescapable part of the Yankee conscience. Secular and humorous instead of religious and castigating, however, Beecher’s works embrace myth only to deflate it or point out how fictional our memories of American heroes and heroines can be. Subsequent works dealt with Halloween, Washington Irving’s Sleepy Hollow legends, Richard Nixon, Mickey Mouse, Willy Loman, T. S. Eliot, the Pilgrims, Abraham Lincoln, and Uncle Sam.

Gradually, in works like Green Heart, 1989-90 and Rib Cage, 1995, Beecher began to address the human body. This interest in anatomy and mortality grew out of a part-time job as art therapist at an AIDS hospice, Bailey-Boushay House. The elements of Green Heart (leaves, beer cans, green grapefruit soda cans) may read symbolically as a narrative about love. Autumnal imagery suggests the ending of an affair. The valentine shape of the heart moves it away from a medically correct heart. The green cans may stand in for “green-eyed jealousy”.

The exposed rib cage in Green heart with its see-through center breaks any pictorial illusion and prepared the way for Rib Cage, 1995 which may be about smoking and health. Disposable cigarette lighters are within the lungs behind the ribs made of metal and cut-up vegetable steamers. Far from polemic or partisan, Beecher presents the breathing organs as cluttered, crowded, and possibly impaired. The flattened film cans surrounding the ribs may also allude to Hollywood’s glamorization of smoking. 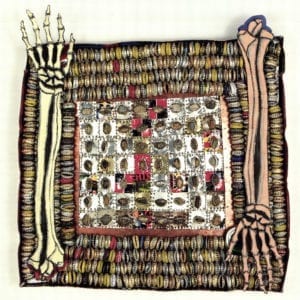 The artist’s affinity to metal has only increased with the years. Its pliable hardness, especially tin, appeals to her as well as the “sensual feeling of pounding its hardness into delicacy. It’s something very strong that you can control”.

Two Arms on a Quilt, 1994 is a transitional piece between the quilt format and the anatomical fragments Beecher concentrated on in her 1995 Greg Kucera Gallery exhibition. With bottle caps as the wide border, Beecher summons up the skeletal arms and hands of dead quilt makers in another memorial tribute. A small stone is inserted into the center of each of the 56 smaller squares at the center. These might symbolize the quilt makers’ stone foundation as a part of American folk art heritage.

Beecher has straddled a delicate line between references to cultural heritages and current events. Guitar (for Kurt), 1994 is one of a number of works by Seattle artists created in response to the tragic suicide of Nirvana rock group singer and guitarist Kurt Cobain. Coming a decade after Homage to Sylvia Plath, this work is more sculpturally adventurous, incorporating a real guitar which has been over layered with a skeletal metal spine and pelvis.

On a more global level, Beecher’s response to the fall of Communism and the end of the Cold War, Red Flag, 1990 is a wry commentary on the merging of Communism and capitalism through a shared need for consumerism. The elaborately woven, cut-up Coca Cola can form a beautifully rippling American flag that is faintly covered in one corner by a yellow hammer and sickle made of carpenter’s tape measures. The white stars of Old Glory are abruptly stapled around it. One of the artist’s most compelling works, Red Flag epitomizes Beecher’s dry humor and is also a tribute to a distant possible ancestor, Betsy Ross, the Boston seamstress who purportedly made the first American flag.

On a more materially complex note, Stag, 1994/96 combines recycled metals on a carved and painted wooden background. This time, the accompanying plastic cigarette lighters are decorated with animals who have become product logos: Joe Camel, rabbits, bald eagles, etceteras. With no let-up in sight, Beecher is reminding us how, ever since Disney’s Bambi and Dumbo, Mother Nature can be sacrificed to pushing a product. 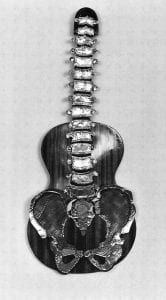 The male deer is an assaulted trophy head by now, literally composed of dumpster garbage elements like coffee cans, rolling tobacco can labels, hubcaps, cigar tins, and even painted-tip cigarette butts. Disgust and pity come to the fore in this, one of Beecher’s toughest pieces. More enraged than grieving, the tone of Stag may foretell an emerging engage quality in the Seattle artist’s work.

As in much of the best contemporary art today that favors the handmade, material is the vehicle for meaning in Ross Palmer Beecher. As her skills at cutting, weaving, bending, punching, and stapling together pieces of metal grows, her power over conveying meaning on complex and varied levels has increased. Allowing the found materials to speak of their humble origins does link her to folk art, to be sure; but her sense of color, design, and stringent moral satire place her in a current vein, on a plane of art that criticizes American culture and myths while reverently mimicking and altering prior craft traditions.