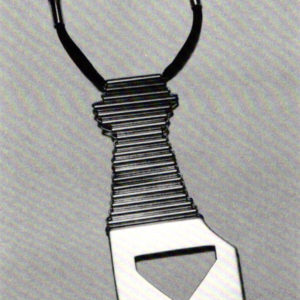 Naum Slutzky Jewelry at the Bauhaus

From 1919-23 the Bauhaus also had a jewelry workshop run as a private enterprise by Naum Slutzky. He was on the of the only teachers at the Bauhaus at this time that was both an artist and a technician. Born in Kiev in 1894, he had learned goldsmithing at an early age from his father who had trained with Fabergé.

He later studied fine art with Itten in Vienna and in addition received a degree in engineering from the Vienna Polytechnic. Gropius met him while Slutzky was working at the Weiner Werkstatte. Impressed by the similarity of their ideas, Gropius hired him to establish a jewelry studio as well as to assist in the metalshop, despite the fact that Slutzky was only 21. 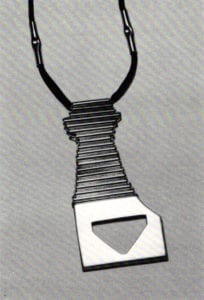 Years later Gropius wrote, “Mr. Slutzky was not only a technical master but also creative and experimental in his approach to metalwork. From the most basic element he could achieve great innovative effects.”

In his jewelry Slutzky favored geometric shapes, especially concentric circles, yet without the machinelike precision that characterized later Bauhaus work. He combined diverse materials, often incorporating wood and ivory as well as semiprecious stones into his designs. His bold pieces, obviously influenced by Expressionism, may also have been inspired by German folk art which was quite influential in the early years at the Bauhaus, especially in the ceramics workshop. 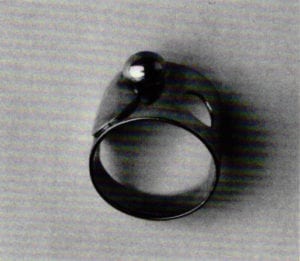 Folk art’s pure and direct use of basic forms and decorative motifs was a way of avoiding historical styles and the arbitrariness of personal taste. Although he was intrigued with the idea of making production jewelry Slutzky never had the business sense to coordinate the effort, and thus all his work was one-of-a-kind.

Slutzky left with the 1922 change toward art and technology, but most likely for personal, rather than philosophical reasons, as it is known that he a personality conflict with Itten’s replacement. In any case his resignation permanently terminated the jewelry workshop. 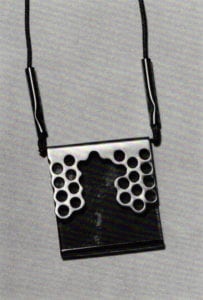 All information here comes from a conversation with Mrs. Naum Slutzky in London, December 6, 1985. The Gropius quote is from a letter dated May 29, 1934 in Mrs. Slutzky’s possession.

This year Edition Teunen was authorized by the Bauhaus Archives in Berlin and Mrs. Slutzky to replicate a necklace and ring by Naum Slutzky, each in an edition of 50. The replicas were made by hand by a German goldsmith. For more information, see Art Aurea, 3/86, pp. 62 & 93.

All articles by this author
Previous Galleries: Galerie RA
Next The Bauhaus Metal Workshop, 1919-1927
Social media