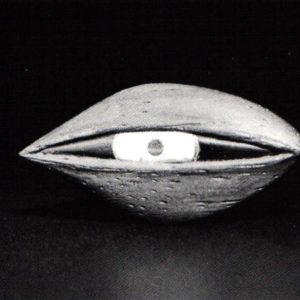 The Transparency Theory has long maintained an indomitable position at the core of any philosophy of art. Simply expressed, the theory claims that the work of art is only a means of facilitating a knowledge of mankind. It is a window through which we see the deeper realities. The work of art is seen through but is not itself to be seen—so the more transparent, the better the art. Esthetic response, accordingly, elicits a sense of discovery, a disclosure of life and nature whose immediacy is contemplated through the work of art before us. 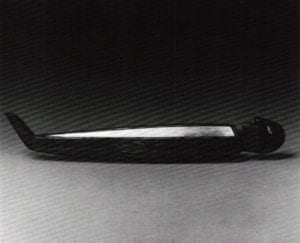 The ideal of this self-diaphanizing art is ancient. Traditionally, the fantasy of representation requires that the work of an present to eye and ear only that which would be presented by the object imitated. A painting of a tree looks just like the real tree, or, in the case of Mark Jordan, an eye is just an eye, but we recognize that the art of the painting is something other than the tree.

Then why paint the tree, or fabricate a representation of an eye? Because when reality and representation negate each other, what is left is the artistic illusion, the gauzy essence of art, the goal made real through the artist’s medium. The artist, like the seer, the actor, the musician, the dancer, sacrifices himself for the sake of something other; whether you characterize it as meaning, idea, content, knowledge of reality, etc., it is something other than what the artwork appears to be. 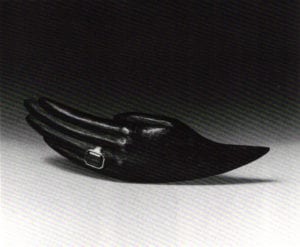 Here, what is the other that Mark Jordan is sacrificing himself for? He appears to be unveiling an archetypal inventory of psychic jewelry that spans both primitive and modern societies. Today, as in the premodern world, metaphysical concepts are not always formulated in theoretical language but in the symbol, the myth, the rite, a complex system of affirmation of reality. It is, however, essential to understand the deep meaning of all these symbols, myths, rites, in order to succeed in translating them into our habitual language—in the case of Mark Jordan, the language of jewelry. 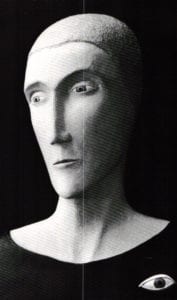 If we observe the general behavior of man, we are struck by the fact that neither objects nor human acts have autonomous intrinsic value. Objects and acts acquire a value and in doing so become real, because they participate in the reality that transcends them. Take the commonest stone. It will be raised to the rank of “precious,” impregnated by magical or religious power by virtue of its symbolic shape or origin, or because an oath has been consecrated with it. 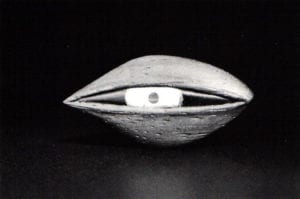 Primitive man acknowledged that no act is his own, that he is living a life of ceaseless repetition of gestures initiated by his forebears and ultimately traced to a higher power outside the realm of humanity. Modern man, on the other hand, acknowledges the history of archetypes but feels more comfortable positing its genesis in the collective unconscious of his psyche rather than in some otherworldly power.

It is here, on the border of eternal myth and collective psyche, that Mark Jordan works his magic. His jewelry discloses the animating principle in man that is the source of vital activities—the soul or spirit that in mythology is sometimes considered to be capable of persisting in a disembodied state after separation from body and death. Mark Jordan’s work is the personification of psyche distilled through the eternal myths and the medium of jewelry.

He writes: “I am now extending this idea of bridging the inner/outer schism with ornament by making it spring directly from the physical body of the subject as if it were a manifestation of inner workings. My ‘ornament,’ though, is usually a physical aspect of a subject which has symbolically assumed enough power to compete with or dominate the appearance of an individual. Inevitably, I find myself working in and around that gray area of human existence that gives rise to myth and dreams.”

The series of maybe 10 lamps are made of copper and put together very roughly, with lots of lead solder, very obvious seams—kind of Frankensteinlike. They have to do with summer in Georgia—it’s often 100 degrees here. 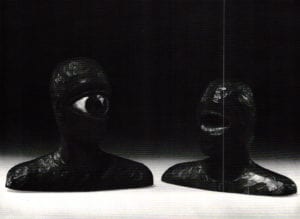 I was thinking that jewelry is a bridge between the inner workings, our inner self, and the social self, or jewelry as a social manifestation. I started making sculptures in which the ornament had taken over, or gained more importance than it normally would on a person. This started to say something about what was going on inside that person or a reaching out, a showing of what was going on in their mind.

The carving might be a head with hands reaching out of it. In a piece like Tenor these forces stated to take over and all the features of the head went away except for the mouth, which was singing or shouting or laughing—giving some information coming out of the person. There wasn’t any intake going on. It wasn’t about any specific individual but the state of an individual.

As opposed to Tenor, Monitor has to do with intake, just watching, through the eye. 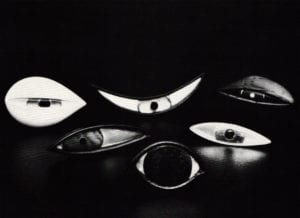 The eye is charged with symbolism, and always has been. As the mythologist Joseph Campbell says, the eye is the symbol of conscious awareness. And I believe that’s true. It’s like a window to our souls. If you look someone in the eye, you want to find out where they’re at. I think that the eye has a lot to do with jewelry. People started wearing jewelry to avoid the evil eye, to avoid that connection.

People would wear something glittering that would attract the eye away and avert the evil eye. Or a woman would wear a bead in the ear so that the infant could focus on something like an eye while it was breast feeding and couldn’t see the mother’s eye. And this focusing on the bead would calm it. There’s something really deep, right at the core of things, with the eye and jewelry; and so I started making a bunch of jewels that were eyes.

All articles by this author
Previous Designing Contemporary Flatware
Next Projects of Exploration: The Art and Science of Line
Social media