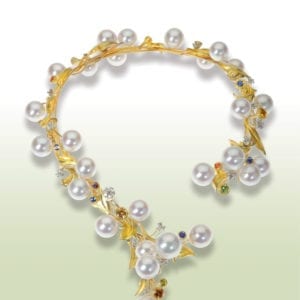 Let’s say you are given 27 of the largest freshwater, cultured, round pearls in the world, and told that you can make anything you want with them as long as it’s a necklace. Other than that, what you do with them is left up to you and your vision. Tempting? That’s exactly how Brenda Smith, a jewelry designer from Atlanta, got her start on creating her Vision Awards Custom Distinction winning piece. Featuring pearls ranging from 18 to 21.5 mm in size, the 18k gold necklace with sapphire and diamond accents was a commission for Somewhere In the Rainbow, a not-for-profit collection used for education about the highest standards of mining, cutting, designing, and crafting of jewelry and gemstones. The collection’s curator approached Smith at the 2016 AGTA Tucson Gem Show based on her success in designing with pearls. 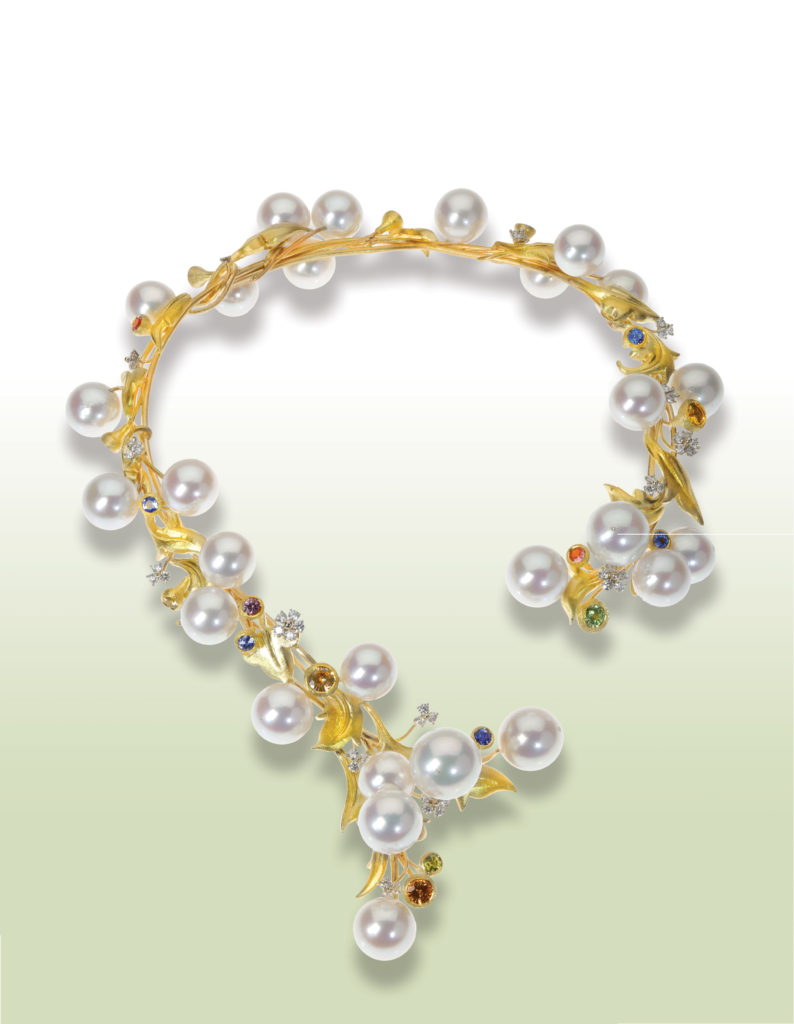 “This client purchased these pearls before they commissioned me,” she says. “They were looking for a designer they could feel comfortable with using the pearls. I had won first place in the International Cultured Pearl competition two years in a row, and had placed in it every year since its inception, so I think that influenced their decision.”

Here’s where Smith discovered the first challenge in this custom job. The only criteria she was given was that she had to make a necklace, and, based on what the client prefers to wear, it had to be 18 inches long. The problem was that, given their size, the pearls, measured as a string, take up roughly
23 inches.

As far as custom orders go, having only those two things as must-haves allowed Smith a lot of leeway. In addition, there was no set deadline for delivery. “They didn’t want to infringe upon any kind of creative direction,” she says. She just needed to figure out how to get down to the requested 18-inch length.

Back at her studio, she considered options. “I asked myself, how do I make 23 inches of pearls into 18? First I thought I could make an ensemble. Two pearls become earrings, more pearls become a bracelet, and then I make a necklace. I played with that for a while, but I ruled it out because I didn’t feel that would [result in] a necklace the caliber of what they were looking for. They approached me because I’m a designer, not because I’m a pearl stringer. I needed to push it further and come up with something totally different than a strand of pearls.” 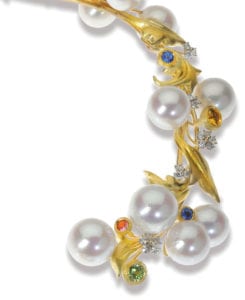 Much of Smith’s aesthetic involves organic, nature-inspired forms, and she turned her attentions in that direction as she began to sketch. “I did my very first sketch of this piece as a doodle, about one inch by one inch, during a meeting,” she says. With an idea she liked in hand, she began work on the piece. However, because of the pearls’ high value, she could not consider drilling them or otherwise working with them until she had an absolutely definite idea of how they would be added onto the piece. “I couldn’t risk drilling them to the point where I couldn’t go back,” she says. “In my mind I had to decide, do I want them drilled all the way through, or do I want them half drilled? Is this design even going to work?”

To get around this, she created a model in copper, with foil leaves, faux gemstones, and “pearls” made from polymer clay, exactingly accurate to the dimensions of each one in the collection. “At least as much time went into the model as into the fabricated piece because I had to work out all the problems,” she says. She used this model to make various tweaks and changes, and after roughly a week of work, she felt she had the piece where she wanted it. Then, in a reversal of how things might usually be done, she sat down with photos of the model and created detailed drawings.

“They approached me because I’m a designer, not because I’m a pearl stringer. I needed to push it further and come up with something totally different than a strand of pearls.” 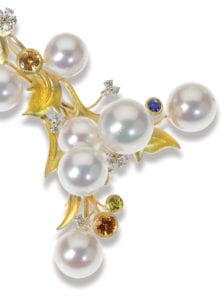 “The model was too crude to show the client,” she says. “I had to convert it to a drawing.” Calling on her background in fine arts, she produced a portfolio of sketches to show not just the piece in its entirety, but also many of its various elements up close. “I did a full-color rendering of the necklace, front and back, with a close-up of each leaf,” she says. “Each leaf is individually made, each one is different. I did a close-up of the colored- stone flower buds.”

In the finished piece, the main body of the necklace is 18k yellow gold, a choice dictated not just by the client’s elevated standards, but also by Smith’s vision of how all the colors play together in this idealized version of a garden and vines. “I wanted a rich yellow color against the pearls and colored sapphires,” she says. Those sapphires, which Smith chose for their consistent brilliance, simulate flower buds. Some of the pearls are graced with tiny diamonds that simulate dewdrops. The diamonds in the piece are meant as a subtle accent to the visual impact of the whole. “They add a little sparkle, but not so much that they steal your attention,” she says. “They add to the orchestration of the whole.”

Time was passing as Smith worked to get the model just right. Although the client had not requested a delivery date per se, they did text her several months in to ask if she’d had any ideas. She sent along a photo of the model in a more finished state. They liked what they saw, and told her to keep going.

Six and a half months after receiving the commission, Smith had a chance to meet again with the curator, as a business trip was bringing her to Arizona. At the meeting, she handed over the sketches. “They were in a presentation folder with the front of the necklace on one side and the back on the other. The curator opened the folder, opened her mouth, and couldn’t speak. She closed the folder and said, ‘Go for it. It’s beautiful.’” 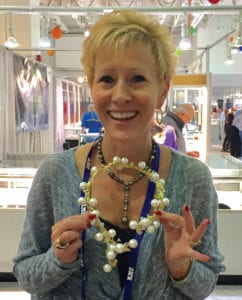 With that green light, Smith got to work in earnest. However, she hit a minor roadblock when it came time to drill the pearls. Their size and value presented a new set of challenges. Typically, when pearls are drilled they are securely set into a jig, similar to a vise. Looking for an artisan to do the drilling, she soon learned that there are no commercial jigs made to hold pearls of such large sizes. This meant someone would have to do it by hand, but no one she initially spoke with was willing to do so because of the very real risk of damaging such valuable pieces.

Culturing pearls of this size requires a seed bead larger than for standard-sized pearls. Whereas many pearls grown around the world get their start with seed beads taken from mollusks in the Mississippi River basin, these oversized pearls began with a bead made from the thicker parts of the shell of a giant ocean clam. This creates a nucleus that is almost like granite in its consistency. “The nuclei are so hard, the tiny bits they typically use to drill pearls would overheat or break inside the pearl before the job was done,” Smith says.

The only person willing to take a run at drilling them was the farmer who’d cultured them in the first place. However, “He said there could be a 20 percent chance of breakage,” Smith recalls. Clearly, she needed to consult with the client. The response was not exactly what she’d hoped to hear. “They said they would not tolerate any breakage,” Smith says. “I thought, ‘If one breaks in half, I’ll make earrings.’ In my opinion, there’s always a solution. I couldn’t tell him not to drill them. We had to proceed.” Thanks to the pearl farmer’s skilled drilling, every one of the 27 pearls survived the operation and the piece was completed. 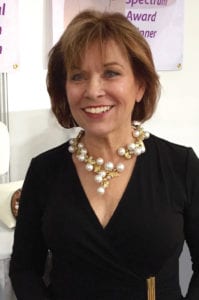 A year after receiving the commission, it was time to reveal the results. Smith intended to present it to her client at this year’s Tucson show, back where this piece’s story all began. And she did…sort of.

“[The sketches] were in a presentation folder… The curator opened the folder, opened her mouth, and couldn’t speak. She closed the folder and said, ‘Go for it. It’s beautiful.’”

I was taking the piece to the vault at the convention center where AGTA has their show, because I wanted to keep it locked up until I gave it to the client,” she says. “That took me past the Cultured Pearl Association of America (CPAA) booth. Because it’s pearls and because they know me, I thought they might be interested to see this necklace. I showed it to Bo Perry, from the CPAA. He took it out of my hands and placed it in their showcase. I thought, well, I know it’s safe with him and I know where to find it when I need it! I saw the curator for the collection at a reception they were holding at the University of Arizona, and I told her where it was when she was ready to pick it up. I did not get to actually see the curator’s face when she first saw it. But she was ecstatic, and had Perry text me a picture of her holding it.”

Her smile was every bit as large as those beautiful pearls. And that customer satisfying necklace not only won Brenda Smith a Vision Award, it also won her another commission from Somewhere In the Rainbow.