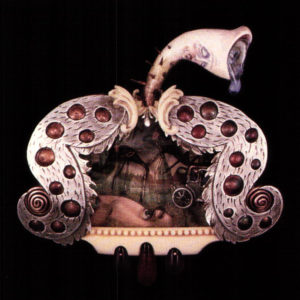 Much American jewelry in the 1980s mirrored the decade’s excess: an abundance of found object forms flooded the galleries. This profusion was echoed in many of the individual pieces; quantities of disparate elements were recycled in the pursuit of a new jewelry for the ecologically aware. While the appeal of this jewelry’s seeming randomness paled quickly, the potential for narrative jewelry expanded when the rich choice of palette was coupled with ideas. The reemergence of content with ornamentation has a strong American appeal, a literalness that aligns itself with the metalsmith’s recurring interest in representational imagery. 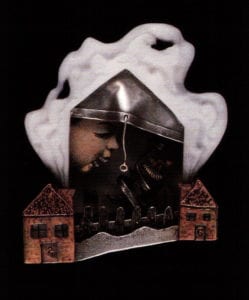 Adapting these concepts to a wearable scale presents special challenges to the makers. In the mid-1980s, Robin Kranitsky and Kim Overstreet began to create wearable dioramas inspired initially by found objects. They embellished them with fabricated components to enhance the tableaux. Calling themselves “Lost and Found,” they formed one-of-a-kind spatial narratives. The complexity of the imagery and the limitations of body scale dictated the creation of a world in miniature. We are invited to peer into a lilliputian universe of the makers’ combined imaginations. 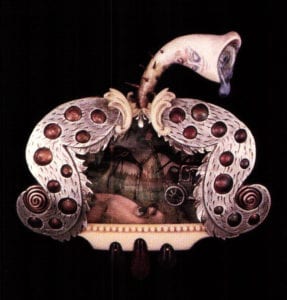 Kranitsky and Overstreet share a fascination with fairy tales and science fiction, surrealism and Victoriana, Frieda Kahlo and Joseph Cornell, animation and dramatic theater. Their vocabulary of recurring images is as varied as the range of moods and issues their stories encompass. They create allegories to embody emotions, conflicts and dreams, setting their stage with human and inanimate objects in architectural settings enriched by dramatic references to nature. 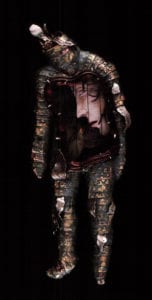 Kranitsky and Overstreet have a unique collaborative relationship in which they work through ideas, division of labor and choices of technique and materials with an aesthetic harmony. As their tales have become more complex, their needs have required them to fabricate more of the components, reforming found objects in order to preserve the mellowed nature of a recycled palette. Their materials include silver, copper, brass, polymers, nickel, lead foil, paper, Plexiglas, Micarta, balsa, glass, bone, clay, stones, cotton, Corian, acetate, epoxies, wire, wood putty scratchboard, Fimo and Sculpy, hair, metal dust, sand, watch faces, postcard fragments, rhinestones, crystal, bamboo, spoons, currency, artificial turf and beads. They carve, mold, inlay, assemble and Fabricate with a virtuosity of skill and technique. They prepare patterns and layouts of inside and outside collages, fashion the components, alter found objects to better juxtapose them with fabricated elements, integrate the frames, enclose the acetate “window” and mount the structure on balsa conforming to the free shape. The backdrop collage is articulated to make the objects appear to float in minute space. Then the environment is sealed with great care, achieving a rareness of combined effort harking back to a medieval workshop. 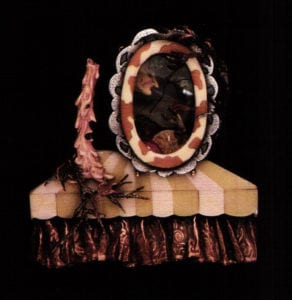 The collaboration began with objects special to the artists and remembrances of nursery rhymes. In Dandling inspired by an antique postcard and charm, the mood is playful. We share a common childhood: a moment in life is frozen, a time of security. The point of view is child centered; a perception of oneself is reflected in the over scale and the delight in the performing pet. The shade blowing in the breeze beckons us to experience the memory of a time when a village could represent one’s whole cosseting world. The design is highly articulated to invite us through the large window of recollection. We are enticed to look into many “windows” in the artists’ work. They explore the shaped canvas as picture frame within another, larger picture whose forms take on an unlimited variation of contour. Design is carefully manipulated to emphasize complexity within what is actually a tiny area. Visual depth is created by layering and forced perspective. These illusions create a monumentality within a miniature domain. Every aspect is so completely worked through, with not one association left to chance, that we are left with ever more mystery. 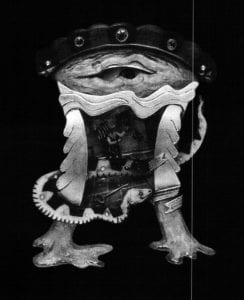 Anybody’s Journey is a stage set with stylized baroque rears and heavy emotion, using an antique ivory razor handle and glass beads set in silver. The lily bows in grief; the drapes part to present a fragment of a commanding melodrama: a carriage pulled by black crows is about to overwhelm a fearful female. The anticipated chaos is juxtaposed with the formal elegance of the design. Through fairy-tale imagery, much of their work addresses pending crises, surviving relationships and overcoming obstacles.

Themes of women’s issues recur, both times of frailty and those of strength. The use of childlike story images to convey these weighty messages has a curious power. The competence and value of the female are addressed in The Story Told, which was inspired by an excerpt from the novel Eva Luna. The vanquished figure is without a past. His posture and worn, heavily patinated armor with torn messages in metal stuffed haphazardly through the chinks emphasize his defeat. His hollow head allows no memory, no hope. Will the madonna-like woman share her strength and her history with him? Will she instill hope, the budding flower, for a new life? Her understanding of the past offers power and optimism for the future. 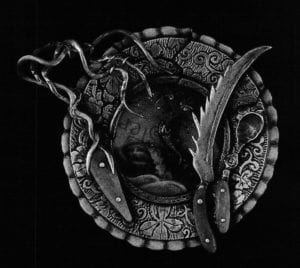 The fantasy is intensified when objects become animated, as in Friend or Foe. The gutted candle views the errant flame struggling to survive. He is either watching his past or hoping for the survival of another. The flame is trying to get back to the candle. We are awed by the power of nature: relentless wind and bleak landscape, aggressive roots and branches and lush, voluptuous cut fruit contrast with the restrained patterns of the furnishings. The stories invite individual reaction and engage viewers to pursue their own conclusions. There are always elements which leave us fascinated.

Some pieces become dark and surreal, dealing with isolation and fear. In Monocular the female figure is seeking sanity in a world of confusion. The overbearing watchful eye allows no peace. The undulating snake prevents her from reaching the key to escape. The tension is enhanced by the stylized art nouveau design which overwhelms the diminutive female. The carved Micarta and varied metals create a beautiful, jewel-like world in which the environment is embellished from a wall painting to a brick floor. But dangerous implications are to be understood on intimate examination.

Intrepid takes the familiar form of a circle pin to a new dimension. We are led through levels of the unexpected, slightly open doors with glimpses and hints of yet another direction in which to go. A richly embellished place setting poses undulating utensils as a threatening force. Within, a merman attempts to defend his space. We set up our defenses but cower inside. There is everything personal and individual about this, and also universal. With each scenario Kranitsky and Overstreet delight in dressing the set for a full visual experience: the play of cool silver juxtaposed with warm copper and wood, the visual power of gesturing tendrils and utensils extending beyond the circle and the intricate etched silver patterning. They invite us to succumb and lose ourselves in these tactile embellishments. 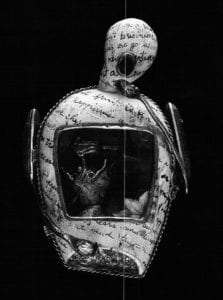 Hunger celebrates the surreal with a tattered, mummylike figure covered in delicate calligraphed messages. The script talks about success. This work was influenced by Dali and his dream image book. Inside the belly of the prosperity box is a figure that is energized by eating very ripe cherries (as in “Life is just a bowl of …”). The arms on both figures have simply become spoons, whose gestures echo one another and lead the viewer’s eye around the piece. The gaping mouth, individual teeth and absence of eyes remind us of what is all-consuming. We think of excess and satiation and unfulfilled appetites. By illuminating our inner desires and fears, we may find them to be universal.

Kranitsky and Overstreet have taken found object jewelry to a new level. They make us aware of the potential of jewelry to be theater. We step through the frame and enter another reality which is at the same time both exotic and familiar. They ask us to consider that the miniature may encompass psychological reality as well as fantasy. The nature and content of their work are about the same concerns: power and fragility, monumentality and preciousness. They have created a new context for our perception of these ideas. Values become intensified and enriched when viewed in this scale, a scale which makes one peer so intently to absorb the details that contemplation of ideas inevitably follows.

Gail M. Brown lives in Philadelphia and writes on jewelry and fine craft.