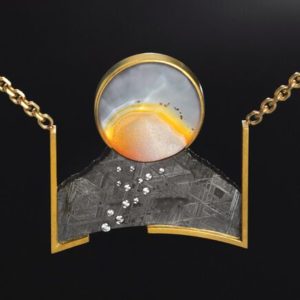 Like many jewelers, Jacob Albee of Jacob Albee Goldsmith in Burlington, Vermont, buys stones without always knowing what he’s going to do with them. That was the case with a near-perfect circle of agate. “It was just a very cool translucent stone with one druzy area,” he says.

Although he’s worked with meteorite many times, this pendant presented challenges: The agate and meteorite faces had to be parallel, the “mountain slopes” of meteorite and druzy needed to align perfectly, and heat control was essential. “It’s always a dance,” says Albee, “because you’re treating a ferrous metal like a fine metal. If you get the meteorite too hot, the intrinsic crystalline beauty of its structure is somewhere between reduced and gone. It’s a very unforgiving material that way.” 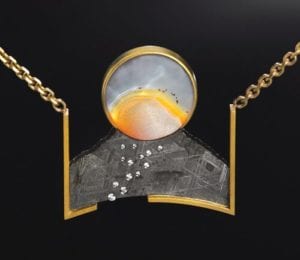 To begin, he formed a bezel in 18k gold for the agate. After scribing marks on the inside of the bezel wall, he cut away the wall where it touched the druzy. He then cut a semi-circle in the meteorite, refining it until it matched the curve of the druzy. “The real key was to have no gap, or as little of one as possible, between the stone and the meteorite to create the flow of the mountain,” he says.

He then soldered an 18k gold border along the bottom and sides of the meteorite, cutting away one section to create space for the diamond flow. Using 14k solder, he soldered another piece of meteorite to the back of the original piece, creating a tab onto which he would later solder the seat of the agate bezel.

The trickiest part about soldering the bezel to the meteorite was that the heat required for that much iron was much more than was needed to solder a thin ring of 18k. Also, the pieces of meteorite had been soldered together at a relatively low temperature, so the joint between them could melt when exposed to the greater heat required to solder on the bezel. (“If I were to do it again,” says Albee, “I’d rivet the meteorite!”)

To address the heat issues and keep the pieces perfectly aligned, Albee arranged the bezel and meteorite, face down, on a soft firebrick so that the meteorite tab and bottom surface of the bezel were flush. To protect the bezel, he pushed its thin front edge into the brick’s surface and placed a small steel weight on part of it: The brick and steel protected the bezel from the heat and also held it in place so it wouldn’t lift up as the cooling solder contracted.

After successfully soldering the pieces together, Albee fine-tuned the spot where meteorite and druzy would meet. He carefully shaped the meteorite edge with a fine Cratex wheel to ensure that the edges fit tightly, but leaving enough space to later squeeze the agate into the bezel.

For the diamonds, Albee drilled fine pilot holes in the meteorite and cut the seats with a ball bur. He began with the largest diamond, which hangs off the bottom edge of the meteorite, to give him options; in case of failure, he could use a larger diamond or tube set one. “Setting a stone like this means cutting an exact seat for only 60 to 70 percent of the stone’s circumference,” says Albee. “The leading corner likes to grab your ball bur and blow out the seat if you don’t keep a very steady hand.”

After he successfully secured the first stone, he seated the remaining stones using a brass punch with a flat end and a light touch with a chasing hammer. Once he confirmed that the angle of the diamonds was such that their tables would light up “in unison,” he used a fine, blunt-tipped steel tool to lightly tap around the perimeter of each stone to immobilize them. He then used a burnisher to burnish a fine edge around each diamond.

The final step was to set the agate. It was a tight and nerve-wracking fit, Albee says, given concerns about breaking crystals or chipping the druzy’s edge. But the careful construction paid off. “It was a matter of thinking it could work, thinking it should work, and hoping for the best!” he says.