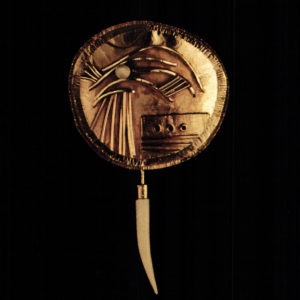 A Dedication to Olaf Skoogfors

Born in Bredsjo, Sweden, June 27, 1930, Olaf Skoogfors initially came to the United States when he was four years old; his family permanently settled in Philadelphia before the Second World War.

I knew Olaf all of his adult life. He came to the Philadelphia College of Art (PCA) just after the Second World War when most colleges were experiencing great increases in enrollment as a result of the influx of thousands of returning GIs. Olaf, however, was not one of those wonderful, boisterous, eager and demanding ex-soliders; he was, rather, an extremely quiet and shy young man, who as a youngster had already studied drawing for several years at the Graphic Sketch Club. He was, from the beginning, clearly a marvelously talented person, but his gentle nervous manner (belied by his extraordinarily deep set, piercing eyes) was the quality I most remember about him as a student.

He was deliberately reticent, but also extremely thorough and it was in relation to Olaf that I coined my ever present paraphrase of Mies van der Rohe, “Slow is Fast.”

While teachers (Kay Finkbeiner, Virginia Cute and myself) found them rewarding, Olaf had a difficult time dealing with crits and evaluations. It wasn’t that he feared or did not accept criticism well. Instead, there was always a kind of impatience with himself as he would glimpse, or see, notions of how he could have done better, or more. He possessed a deeply rooted and insistent drive to challenge and surpass himself each time he started or completed a piece of work. He knew that he was a good designer, that his craft was excellent and that he did, in fact, lead the class, but he took great pains to keep it all inside of himself. All the time he was an undergraduate student, he remained a very quiet, shy, retiring and introspective person. 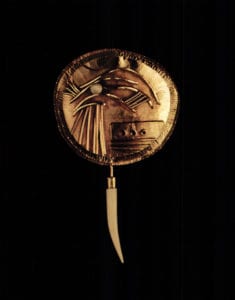 When, in 1953, Olaf graduated, we managed to get him a partial scholarship that would have enabled hint to continue his studies at Rochester Institute of Technology (RIT) in the School for American Craftsmen. Unfortunately, his induction into the army prevented him from doing so at that time. We were all very concerned that this fragile young artist might somehow be harmed by this alien interruption so early in his career, bur happily this was not at all the case.

During his tour of duty in Germany, Olaf took advantage of the situation by spending as much time as possible reading, drawing and enjoying a marvelous sense of emergence with his bride. When he returned, he was, at least outwardly, a completely changed person. He was openly gregarious and talked freely about his travels, work and plans to continue his education. His eyes no longer pierced; they simply twinkled and danced as he poured out his ideas and notions of how he would proceed to get on with his life. He did go on to RIT to study with Hans Christensen and quickly established himself once again as an excellent student. It was during this period of his life that he formed his deep and lasting friendship with two other great metalsmiths, Ronald Pearson and Jack Prip.

Soon after his stay in Rochester, he returned to Philadelphia, opened a small shop and commenced his relatively short journey to the very top of his profession. He was recognized early as one of those rare persons whose work clearly transcended jewelry as adornment and became a personal statement of art.

In 1959, he joined the faculty of PCA, and, later, after I relinquished the directorship of the Jewelry and Silversmithing Department to teach in the Industrial Design Department, we recognized that OIaf was already establishing himself as a leader among the gold and silversmiths, and we prevailed upon him to take over the metal area at PCA.

It was a fortuitous move. Olaf became an excellent teacher, well liked and deeply respected by his students and colleagues. By the late sixties. Olaf was chairman of the Craft Department, an area responsible for instruction in metal, wood, ceramics and fibers. His status as a teacher was constantly enhanced by the continuing preeminence of his professional work. He exhibited nationally and internationally. He was a founding charter member of the Society of North American Goldsmiths and was much sought after as a visiting lecturer at schools throughout the country. He was a marvelous model for his students to study and emulate, for, with all the pressures of the College and his professional fame, he never shortchanged them. There are many young designers who owe him a great debt for his insights, with respect to their education.

When I was Dean of the Faculty in the early seventies, I came to rely heavily on Olaf for his clarity of thought, sharp wit and true dedication to the Craft Department of PCA. All during this time, Olaf served his family with rare devotion, sat on many important college committees, was a source of much good humour with his didactic precision concerning parliamentary procedure and was in every way an exemplary professor.

It is significant to recall that while he gave so freely of himself to his family and the college, he continued to relentlessly pursue his extraordinary art. It was during these years that he produced most of these brilliantly conceived, keenly proportioned, wonderful, wonderful pieces of exquisite jewelry.

Excerpts from: Economic Alternatives for the Goldsmith
A symposium held at Tyler School of Art, Dec. 1972

I have a shop and produce jewelry for sale with a view to profit. Luckily, my generation has caught up with me, that is to say that the people who were in art school at the time I was and had “good taste” have now reached the point where economically they are able to purchase my pieces. So, if you wait long enough, you’ve got it made. In the meantime, you’ve got to figure out some way to make a living. . . . 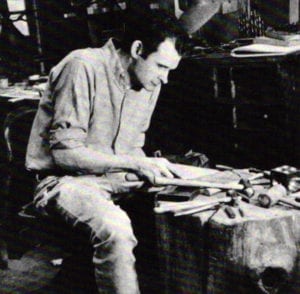 Olaf Skoogfors in the studio

I started my little shop in Philadelphia to produce so-called production jewelry, which I learned from Ron Pearson. I did not work for him, but when I attended the school for American Craftsmen I passed Shop 1 every day on my way home, and I used to stop in and visit. Finally I made such a pest of myself that they started treating me civilly and answering my questions. After a while I learned how to price and how to go about setting up a shop and how to make a living at this thing. I practiced this pretty regularly from then on, starting out a production line. In 1957, when I came out of the School for American Craftsmen, I spent the summer working on models. I had those models cast, I made a series of production pieces. In September of that year I went to my first shop with a suitcase full of jewelry. And I sold it, to my great amazement. The owner bought it and re-ordered. This was the beginning of my career in production jewelry. Since then I’ve had the opportunity to do many other things. I’ve done some great compromises. I’ve had to accept jobs that are not in the least bit aesthetic, which nevertheless I will not apologize for. One in particular was a trophy for the gas meter company here in Philadelphia for their executive golf tournament. It’s a model about 12″ high of the old Philadelphia gas lamp. 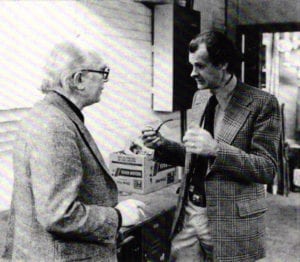 The one thing about making a living in crafts, jewelry in particular, is the fact that it depends on the lifestyle you want to pick. You can adapt your craft to any lifestyle you want to pursue. You can choose to be away from the commercial end of it and live as independently as possible, or you can be right in the center of the trade. I waver somewhere in between, being very interested in earning a dollar and making money at what I’m doing and also equally interested in not working very hard.

Believe me, I started out working 7 days a week, 12 hours a day. There’s no way out of it. But the similarity is the dedication. The need and desire to do the thing you’re going to do. Because one thing is for sure, it doesn’t come to you. You go for it. You work at it and you work towards it. And eventually if you are lucky and you hold out long enough, you can make it. I’m still working pretty hard. I divide my time among many different pursuits: teaching, administration, as chairman of the dept., supervising production work, I have someone working for me part time, doing commissions, and then just doing the things I want to do, and fortunately now they’re selling.