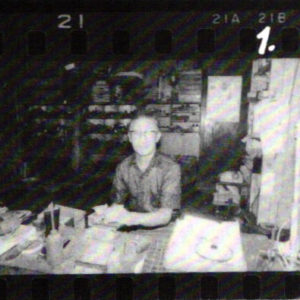 I stood on Kawaramachi Street in downtown Kyoto. Kyoto, capital of Japan, home of the emperor from 794 to 1868, center for the three great schools of the tea ceremony, city of Noh drama, Ikenobo flower arranging and enigmatic Zen Buddhism.

I stood in front of the McDonald’s. It was a good place to stand at 6:30 on a February morning, despite the aroma of Egg-McMuffin wafting out onto the street, because large heat lamps were focused on the sidewalk by the entryway and it was bitter cold outside. 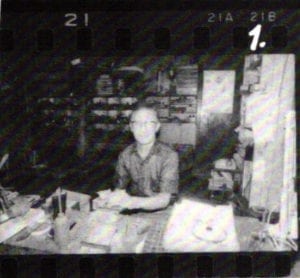 My bus arrive, I got on board, sat and stared out the window daydreaming as I was carried through the streets of Kyoto to the fat southwest corner of the city. I got off in a residential area and walked along small back street, past a frozen field of rice stubble. I could already hear the banging of metal against metal emanating from a small tile-roofed building ahead of me. As I approached, Mr. Tanaka’s little dog barked ferociously, growling and snarling as if he would tear me apart, but when I reached top open the gate he retreated hostility to his little hut. I would have to come here for three more months before that animal would permit me to enter without barking. I never did learn his name, I just called him Inu-chan, meaning “dog.”

When I entered, the apprentices looked up and nodded to me without halting their work. Mr. Tanaka was not present. I had been coming to this shop for almost two weeks and I knew what to do. I changed from my street pants into some sweats and from shoes into thongs. Then, as I stepped out of the thongs and up onto the platform, where most of the hammering was done, I picked up the strip of metal I had been working on when I left the day before. It was a piece of copper about two inches wide and 12 inches long. It had originally been shorter and quite thick. It was only one of several that I was reducing in dimension. I took the forged strip and proceeded to the shelf of stakes where I picked out a flat-topped anvil, a planishing hammer and a mallet. 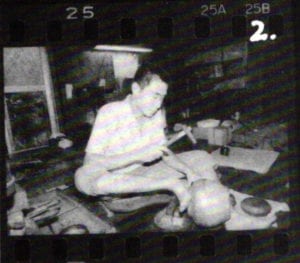 At my place I sat down on the worn planks and adjusted the stake in the square hole in the wooden stump set into, and even with, the floor. Placing wedges on either side, I drove them tight with the mallet to secure the anvil in front of me. I shifted myself, trying to get comfortable. But sitting on the floor, working for hours in a hunched-over position had made my back and buttocks sore. I looked over at Masatoyo, Mr. Tanaka’s head apprentice. His were focused on his work, raising two identical copper water vessels, but I thought I noticed a slight smirk on his face.

I gritted my teeth in determination, prepared to do what ever was necessary to complete my task. I laid the copper on the anvil and started to evenly, systematically planish the strip. And I did quite well.

I should have, I had been working metal for 15 years. I have a degree in metalsmithing from Tyler School of Art and a masters from Southern Illinois University.

My back began to ache.

I had been teaching metalworking at the college level for eight years; some of my students were now teaching.

My hammer blows became a little erratic, I was leaving a few tiny spaces unhit.

I held the respect of at least a few of my peers. 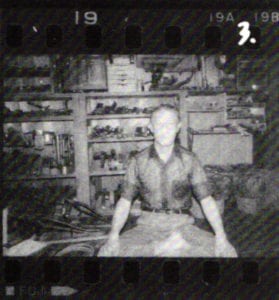 Already perspiration was breaking out on my forehead, although my toes were so cold they were numb.

Masatayo scooted over to check my progress. He shook his head critically and help up his hand for me to stop. He took the hammer and copper from me and said in Japanese, “Like this.” He tapped with the rhythm of a metronome and the marks he left behind had the precision and order of fish scales. “Not like this,” he said. He smacked at the metal in a lunatic pantomime of someone with a double-jointed arm swatting flies.

I am a patient person by nature, not prone to fits of anger. But I must admit that, like anyone, my pride can be wounded. And at that particular moment the idea of throwing the hammer through the sliding glass door into the camellia bushes passes, if only for an instant, through my mind. Instead, I adjusted my posture and concentrated on creating a surface so perfect and uniform that even Mr. Tanaka would be impressed. 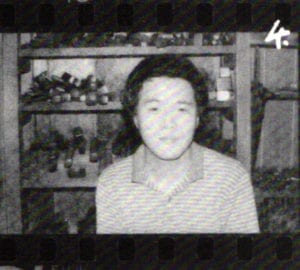 On my first day at the shop I had brought in drawings of a vase I wanted to raise, an asymmetrical, hollow form that was elegant yet dynamic. Mr. Tanaka had shown interest in it and had advised me on the size of the disk to cut out. Then, when he saw me start to raise, he registered doubt and finally he stopped me and had me set the disk aside. He assigned me to work on the strips. First I had to stretch them in one way or another and then I had to planish them.

I had been angle-raising for many years, but it was always from a position seated in a chair. In raising “Japanese-style” the form is held with the mouth facing the craftsman while he hammers towards himself. No real criticism of my technique had ever been voiced before, but then that might have been for lack of demanding and knowledgeable critics.

In any event, I redoubled my efforts to improve any hammering. My commitment and perseverance were shortly rewarded with even more excruciating aches and pains. 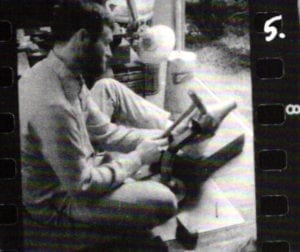 That afternoon Mr. Tanaka came into the workshop. His approach was made obvious by the stiffening of posture and increased intensity of productivity that preceded him. All four apprentices snapped to attention. Even at lunchtime, when they occasionally dozed while waiting for the of their break, they would sit bolt upright at the sound of his footsteps.

Perhaps Mr. Tanaka was a sever and exacting master. I wouldn’t be surprised if he was. But to me he was a kind and patient man. He was 68 and could sit on the floor holding a vessel with both feet while hammering it for hours without effort or exertion. He laughed easily and spoke modestly about the craft he had been practicing for 52 years.

Mr. Tanaka is not a superstar of metalsmithing. He is not a National Treasure and although he holds the most adamant respect of his fellow craftsmen in Kyoto, he is probably little-known in the rest of Japan. But the keenness of his eye is seen in every detail of his work, the sensitivity of his hand is embedded in the fluidity of his forms and the richness of his textures. Subtle nuances of color, shape and surface reflect his perception of the lush but fragile beauty of his environment and the tenacious but curious character of his people. 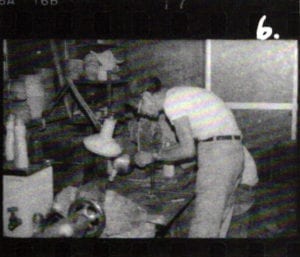 Flipping his shoes off as he stepped up onto the platform, Mr. Tanaka came right over to me and watched me hammering. I felt his eyes examining my effort. He reached out and I placed the piece of copper in his hand. He stared at it as if some cryptic message was written faintly on its labored surface. He ran his thumb over it a couple of times. He smiled and then he laughed. He barked something at Masatoyo.

Mr. Tanaka often spoke to me through one of the apprentices. He laughed again and then walked out, stepping as fluidly into his shoes as he left as he had stepped out of them on the way in.

“You can go back to the vase now,” Masatoyo informed me.

In a few weeks I finished that vase and although it turned out to be one of my fondest pieces, its accomplishment is insignificant in comparison to those copper strips.

Harlan Butt teaches at North Texas State University and contributed to the guide to Kyoto in this issue.