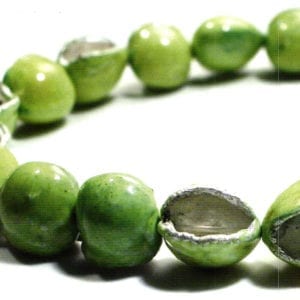 Sam Tho Duong always springs to mind whenever I think of ginger. The spicy and stubbornly shaped condiments is inextricably linked with the work of this jewelry designer. And it’s all thanks to coincidence that he has been experimenting with this unusual natural material for several years. 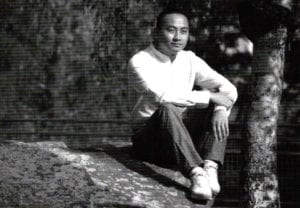 Combining calm and a spirit of exploration in creative jewelry design: Sam Tho Duong 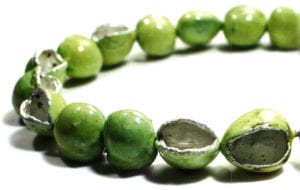 Natural materials form the starting point for Sam Tho Duong’s jewelry creations. The cherry stone chain was one of his first works produced for sale 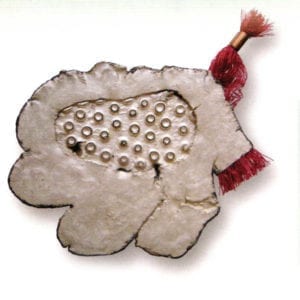 The ‘ginger family’: Sam Tho Duong always uses the same basic model but varies its application in the design. Sometimes the root is rolled flat to form a brooch 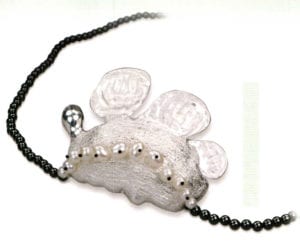 Sam Tho Duong has his Pforzheim professors to thank for his work with ginger. When looking for a topic for his thesis, they decided to present the Vietnam-born designer, who now lives in Germany, with a ginger root. Born in 1969 in Bien Hoa, Sam Tho Duong took on the challenge and attempted to transform the root into a unique and artistic piece of jewelry. He examined and dissected the fragrant material, dried it and observed it, cut open the root, threaded item onto it, painted it and decorated it. Today he still applied this patient and experimental approach to his work and still uses ginger. The only difference now is that he rarely works on the original material; he prefers to use a cast of a particularly beautifully shaped ginger root which he has already prepared some time ago to create his various pieces. It is important to him that the basic form remains the same and is therefore recognizable whereas the details can be changed. He then uses a combination of different additional materials such as varnish, beads, precious metals and gemstones to give his original shape a new and more decorative face without disguising the fact that the piece is related to the ginger family. He has also retained the dissection approach originally applied to his first ginger root. He sometimes hollows out the basic form or decorates it from the outside or else flattens, splits, halves or duplicates the original shape. 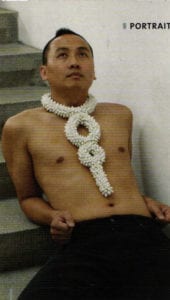 His latest project is a work which uses paper. Here, the artist wears one of his own ostentatious paper chains 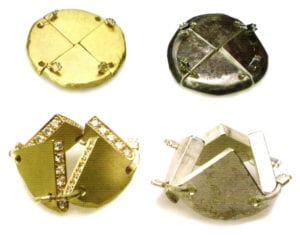 Fantastic objects which can be observed, opened out and worn: the avocado rings were developed by chance 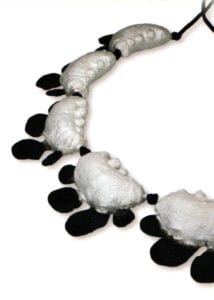 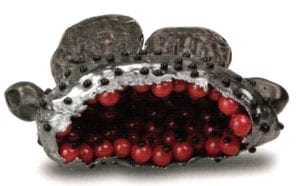 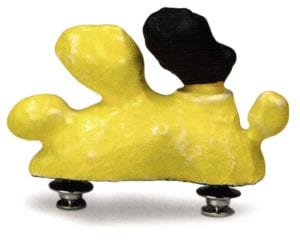 Sam Tho Duong has also consistently used other (natural) materials in his work, in addition to ginger. Whether a cherry stone or avocado stone, his curiosity is only satisfied when he has fully explored a material and freed it from its everyday associations. Materials can then be incorporated into a new context with an open mind and allocated a new decorative function, which is a logical consequence for Sam Tho Duong: slices of avocado suddenly become rings, cherry stones become beads. His sculptured avocado stone rings are also the result of chance. When investigating slices he had cut from an avocado they kept on falling into several pieces, much to the designer’s annoyance. So he thought about how he could hold these elements together and decided to connect them with loops of nylon. As soon as he placed his finger between these linked pieces, he knew he had devised a fantastic ring Sam Tho Duong then decided to move away from the original materials used in his avocado rings to work on making these foldable rings in expensive metals such as gold and silver. The decoration of these pieces is very varied: these discs, which are only really recognizable as rings when you place them on your finger, are sometimes kept very simple and other times decorated with rows of sparkling diamonds. The multi-award winning designer continues to work on several projects at the same time so as to allow himself and the materials time to develop further. His latest project is derived from an idea he has long had in mind: creating large-sized chains from white and yellow paper. Sam Tho Duong opted to use toilet paper because of its feel. He cuts the paper into long strips which he then rolls into individual beads and threads together artistically. The resulting chains are reminiscent of all his works and most specifically of his Asian origins. “With my long paper chains, I want to show that I have the courage to make ostentatious jewelry,” says the artist who usually comes to attention with a friendly reservation. By the way, what coincidence led to the use of toilet paper in his work has not been passed down.

All articles by this author
Previous Frederic Braham: Jewelry As Fine Art
Next Diana Porter: To Make Something Change
Social media