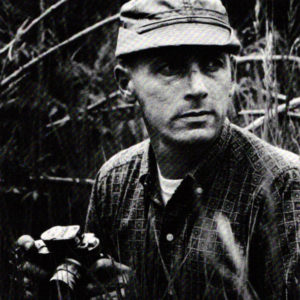 Christian Schmidt is infamous for his contribution to the 1964 “Fiber, Clay, Metal” exhibition at the St. Paul Art Center, where he entered a so-called Medal of Honor by the fictitious Abraham Isitshit as a protest against the lack of skill and poor quality of many entries to the juried show (of which he was one of the four jurors). The piece was not only accepted but it gained special recognition by being published as the frontis to the catalog.

A native of Minneapolis, Schmidt studied jewelry with Philip Morton in 1951 before receiving a B.S. in Art Education from the University of Minnesota. However, he gave up teaching early in his career to produce his own life of semiproduction work, which was partially cast to make the pieces available at a more modest price. His award-winning work, which sought to express the vitality and organic irregularities of living things could be classified as “the new naturalism,” a theme shared by a number of jewelers around the country, including his good friend Ruth Roach. 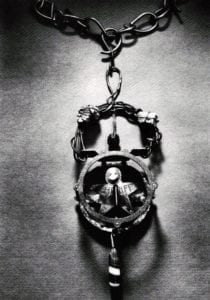 While Schmidt died prematurely in 1974, he made a lasting contribution to metalsmithing and jewelry through his keen sense of observation and his ability to translate his vision in both his work and his words. Here we have asked his wife Janet to recall his encounters with art and nature.

Christian Schmidt worked with organic forms; the metamorphosis of the butterfly, the gill structure of a mushroom cap, the thorax of an insect — these excited and challenged him. Accompanying Christian on his expeditions into the woods around our Minnesota home, seeking dried plans, weathered bones or skeletal leaves, was always a learning experience for our three sons and me. I remember particularly one of these forays when a caterpillar was found. The excitement of this discovery was further heightened when the caterpillar was identified as the beautiful Monarch butterfly, a species that travel 2500 miles in two months to winter in a tiny 30 by 50 mile patch of rugged, mountainous forest in south-central Mexico. Thus began Christian’s fascination with the butterfly metamorphosis.

Photographed through the close-up lens in our home studio, the caterpillar began a series of mysterious biological transformations on is path toward maturity. Christian recorded his observations:

“After thoroughly gorging itself upon milkweed leaves, the caterpillar attach edits tail to a twig by spinning a short connection of silk. Releasing is grip, it hung head-down, is body arched in a gentle hook. For the next eight hours it remained in this attitude, digesting is feast, interrupted only by slow, undulating contractions. The brilliant bands of yellow, black and white began to lose their intensity and gradually took on a green cast. It no longer appeared as large as before but became more elongated as is legs and feelers gradually shriveled. 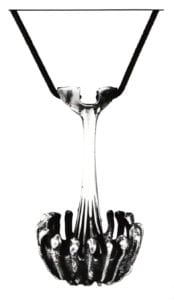 “Suddenly, the skin split at the back and a shimmering emerald-green mass emerged. This triggered a response of continuous, almost violent motion. By expanding, contracting, quivering and swaying, the split extended the length of the caterpillar and the green-yellow-tinged chrysalis escaped from is banded transparent skin. Once liberated, its urgent motion subsided as it slowly shrunk to the cylindrical form, punctuated with glittering gold and black studs.

”The first indication of emergence was a vertical split that opened slowly like a hinged portal as the butterfly forced is head down and outward. Once its legs were out, it clutched the chrysalis shell—and none too soon, because the heavy abdomen and crumpled wings rumbled out and the creature swung precariously by its delicate feet. It remained this way while body fluids throbbed into the wing structure, ironing out the wrinkles and extending the wings to their full length. After several hours of drying and hardening, it was ready for flight.”

Metamorphosis was to be the theme of Christians first sculpture. Many times he had been frustrated with the scale limitations of wearable jewelry, even though most of his pendant designs were conceived as small sculptures. The concept of Metamorphosis I (figure l) offered additional frustrations for Christian as he searched for its translation in sculptural form: “Had I been working in a more plastic material,” he wrote “I would have begun pushing stuff around, hoping for a direction to occur, but instead I just sat and stewed.” 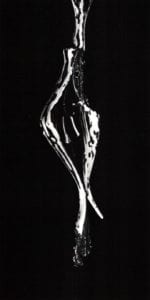 He agonized for days wondering which path to take. He was looking for the essence of a caterpillar, a chysalis and a butterfly. As his frustration grew, he began sketching in self-defense: “Eventually, I decided to approach the problem by using a cocoonlike form—equivocal in character in that a single plane defined an intricate series of concave and convex volumes.”

This vague idea generated the initial action, and ideas flowed as the metal took shape. “Additions that at first seemed exciting were pared away or completely removed as I groped along. The lower stem, for example, at one time terminated in large, rootlike members. As the work progressed, it became obvious that this area had been given too much emphasis, which defeated the total unity. It was reduced in three separate stages to its final form. Each time one area was changed, it usually affected the overall relationship, so that other areas had to be modified as well.” In the end, however. Christian was disappointed with the completed piece. His expectations for capturing dynamic change in a static object fell short of his goal.

The “mushroom series” was more successful as the irregular patterns, elongated ridges or folds and gill structure of the mushroom offered Christian many design variations with which to begin his investigations. His work evolved slowly and often he would repeat a sequence from the same design. He preferred to develop and refine an idea, exhausting the design possibilities before moving on to another concept. The first four Mushrooms utilized the cup-shaped crown and stem. These pieces were relatively flat and two-dimensional, with one side having definitely more ornamentation. Christian questioned these designs: “Suddenly, there came the realization that I had been adhering to an unquestioned traditional concept of the form of jewelry and had not been exploiting full use of the third dimension. Why couldn’t a pendant be a totally three-dimensional hanging sculpture? Why shouldn’t it have visual and structural coherence when seen from all directions?” 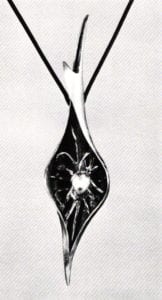 The following pendant Mushroom V (figure 2) was a departure. The volume of the mushroom became a three-dimensional hanging sculpture though definitely wearable. Is simple, straightforward statement was pleasing. Mushrooms VI through XI became more elaborate. A moonstone became a focal point of one, silver spikes push up from another, a gold casting shimmers recessed at the base of the stemlike form in the final piece of the series.

The mushroom series led to other natural models like the milkweed pod. Christian viewed the pod as a nautral “shelter” for a spiny gold casting and an unusual stone (figure 3). Also, the shell could be a smooth oxidized surface or richly overlaid with many variations. The “pods” brought him early success, with awards at the 1956 “American Jewelry and Related Arts” in Rochester New York and the 1957 and 1959 Midwest Designer Craftsmen competitions in Omaha, Nebraska. A seedpod pendant and a fused silver and ebony bracelet were selected for exhibit at the 1958 Brussels Worlds Fair.

The cylindrical series, which Christian also referred to as the “tin can series” derived from his knowledge of insect bodies. From past experiences, he remembered that a rich structural pattern would result from cutting into bundles of silver tubes after they were fused into a mass. Tubing of different diameters was bent from silver strips cut into two different lengths and bundled around a shaft of silver wire. Heat was applied to the bundle of tubing standing on end. Some tube ends melted down and some closed up while the silver binding wire melted, forming beaded patterns. This technique provided variations by changing the arrangement of the tubes. Textural variations were obtained through control of the fusion process leading to pitted surfaces that contrasted with smooth areas of metal. This direct fusing appealed to Christian because it enabled him to quickly implement his ideas. 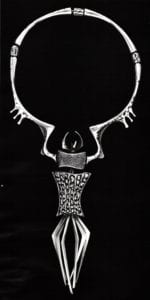 My husband’s last pieces, which were to be his final legacy, were a departure from his earlier work. On a larger scale, they were integrated as whole entities. One, Cleopatra’s Necklace (figure 4), is an insect form with articulated segments. The center thorax area has rows of small gold nuggets set between fused vertical silver ribs. There was an intense urgency to complete these works before his untimely death in 1974.

Christian and I met while ushering for concerts at Northup Auditorium at the University of Minnesota, where he graduated in art education, with a minor in music, in 1956. In 1951 he had studied jewelrymaking with Philip Morton. He worked for a commercial ring firm in centrifugal casting for five years while working on his degree. He also taught jewelrymaking and design at the University of Minnesota, the St. Paul Gallery (now The Minnesota Museum of Art) and the Minneapolis School of Art (now the Minneapolis College of Art and Design) from 1956 to 1963.

In 1963, coinciding with moving into our unfinished house that we were building, Christian realized his dream of devoting full time to producing handcrafted jewelry. His formal teaching behind him, he developed a line of cast jewelry for sale through shops, museums and galleries. All custom orders for wedding bands and one-of-a-kind pieces, including a cast line of jewelry, were sold in our home studio. Christian wanted his family to be involved in the jewelry business. Our sons, Mark, Gray and Dale, were taught jewelry techniques at an early age. Each one became a skilled craftsman, also selling some of their work in the studio. 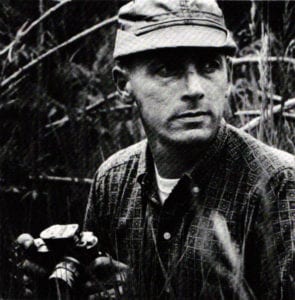 Christian Schmidt and Reid Hastie authored Encounter with Art (published in 1969 by McGraw-Hill), a book that analyzes the creative process and the problem of evaluating the quality of art. This was a major accomplishment that consumed many hours over a period of three years.

However, our life was not all work. There was time for sledding or for an impromptu game of softball. Friends and customers might be given a tour of our woods and stream or be asked to share the bounty of our huge vegetable garden. Snow shoeing on sparkling snow to pick up the mail and skating on the frozen stream were experiences to be remembered with pleasure by my sons and me.

A humanitarian in every sense, Christian would not hesitate to help his fellow man, whether offering a helping hand to a job that needed to be done or to an ecological problem. Not only did he use his camera for esthetic beauty but as a means of documenting the need for cleaning up the pollution in Sand Creek eight miles downstream from where we lived. This particular cause meant he curtailed all activities for several months to concentrate on correspondence to public officials who could most alleviate the problem. His documented slides were part of a lecture given to local schools and the city council. Nothing could deter him. His goal was not immediate but it was a beginning that led to the solution a few years later.

Janet Schmidt is on the staff of the Minneapolis Institute of Arts and is a freelance violinist.